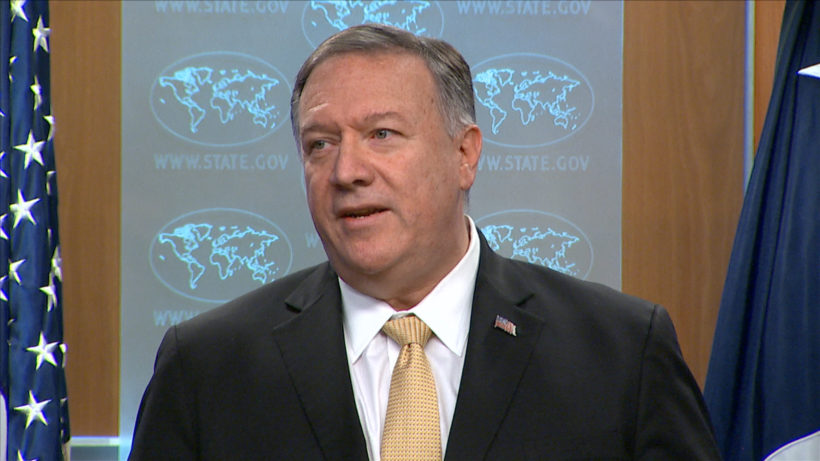 Secretary of State Mike Pompeo announced on Nov. 18 that the United States will no longer view Israeli settlements as “inconsistent with international law."

(by Richard Gonzales, NPR) – Secretary of State Mike Pompeo announced Monday the Trump administration’s latest pro-Israel change in U.S. policy, saying the State Department is rescinding the policy it implemented in 1978 that viewed settlements in the Israeli-occupied West Bank as inconsistent with international law.

That legal opinion, known as the Hansell Memorandum, which was put in place during Democratic President Jimmy Carter’s administration, said that “civilian settlements in those territories is inconsistent with international law.”

Pompeo said that over the years U.S. presidents have viewed the opinion different ways but that the Trump administration does not view the settlements as inconsistent with international law and leaves the issue of individual settlements up to Israeli courts.

“Calling the establishment of civilian settlements inconsistent with international law has not advanced the cause of peace,” Pompeo told reporters at the State Department. “The hard truth is that there will never be a judicial resolution to the conflict, and arguments about who is right and who is wrong as a matter of international law will not bring peace.”

[Not unexpected, as they support the Palestinian cause over Israel] most countries of the U.N. and the United Nations Security Council consider settlements a violation of international law. Settlements — home now to hundreds of thousands of Israelis — are built on land Israel captured in 1967 during the Six Day War [that] Palestinians [contend is their land]. A series of U.S. administrations have allowed settlement construction to continue but frequently criticized them publicly.

The move comes after the administration [officially recognized Jerusalem as Israel’s capital and moved the U.S. embassy there – under the U.S.’s Jerusalem Embassy Act of 1995], as well as formally recognizing Israel’s sovereignty over the disputed Golan Heights.

A statement from the office of Israeli Prime Minister Benjamin Netanyahu praised the Trump administration for backing the Jewish people’s historic ties to the West Bank, which the Israeli government calls by the Biblical name Judea and Samaria. It said, “This policy reflects an historical truth – that the Jewish people are not foreign colonialists in Judea and Samaria.”

Palestinian negotiator Saeb Erekat issued a statement saying: “Once again, with this announcement, the Trump administration is demonstrating the extent to which it’s threating the international system with its unceasing attempts to replace international law with the ‘law of the jungle.’ ”

In his remarks, Pompeo denied the policy change was timed to benefit Prime Minister Benjamin Netanyahu, who favors annexation of the West Bank. Netanyahu is locked in a political battle with his rival, Benny Gantz, who is trying to cobble together a majority in Israel’s Parliament this week.

“The timing of this was not tied to anything that had to do with domestic politics anywhere,” said Pompeo. …

Published at NPR .com on November 18. Reprinted here for educational purposes only. May not be reproduced on other websites without permission from NPR.

2. What did Democratic President Jimmy Carter’s State Department policy say about the Israeli settlements in the West Bank?

3. a) How did Secretary of State Mike Pompeo explain U.S. policy over the years on the settlements?
b) What did Secretary Pompeo say about the Carter policy and peace between Israel and the Palestinians?

4. In what two other major points of dispute between Israel and the Palestinians has the Trump administration taken actions / or made statements in support of Israel?

5. a) Watch the videos under “Resources” below. What do you think of the Trump administration’s latest show of support for Israel? What do you think of Secretary Pompeo’s statement on U.S. policy on settlements in relation to advancing the cause of peace? Explain your answer.
b) Ask a parent (or a grandparent) the same questions. Discuss your answers.