US: North Korean regime “will be utterly destroyed” if war comes 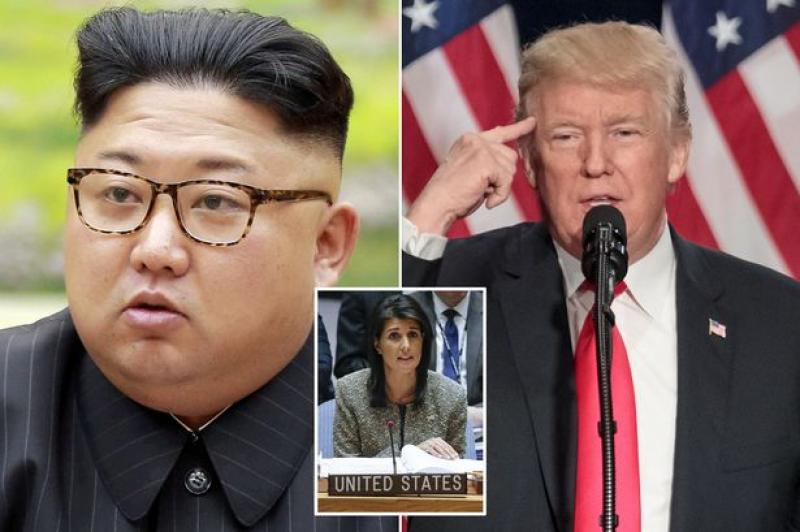 On Wednesday, a day after Kim Jong-un tested the Hwasong-15, a newly developed intercontinental ballistic missile that he said could deliver heavy nuclear warheads anywhere, President Trump referred to the dictator as “a sick puppy.”
At an emergency meeting of the U.N. Security Council on Wednesday, U.S. Ambassador Nikki Haley said, "we have never sought war with North Korea, and still today we do not seek it. If war does come, it will be because of continued acts of aggression like we witnessed yesterday."

(by Pamela Falk, CBS News, Last Updated Nov 30, 2017 5:41 AM EST) UNITED NATIONS — After the launch this week of an intercontinental ballistic missile by North Korea, U.S. Ambassador Nikki Haley and her counterparts from Japan and the Republic of Korea requested an emergency U.N. Security Council meeting.

At the Council meeting late Wednesday, the United States set out a path forward, asking China to cut off oil to North Korea and asking the U.N. to cut off North Korea’s voting rights at the U.N., saying, “we need China to do more.”

“Through sanctions we have cut off 90 percent of North Korean trade and 30 percent of its oil. But the crude oil remains. The major supplier of that oil is China.” Haley said.

“We are once again at a time of reckoning,” Haley said. “North Korea’s behavior has become more intolerable.” She added that “over 20 countries from every corner of the globe have restricted or ended their diplomatic relations.”

“The dictator of North Korea made a choice yesterday that brings the world closer to war, not farther from it,” Haley said. “We have never sought war with North Korea, and still today we do not seek it. If war does come, it will be because of continued acts of aggression like we witnessed yesterday. And if war comes, make no mistake, the North Korean regime will be utterly destroyed.”

The missile test, which was (overseen) by North Korean dictator Kim Jong Un, was its first one since September.

Wednesday’s launch of what the North called the Hwasong-15 intercontinental ballistic missile (ICBM) demonstrated a greater range than other missiles it’s tested and showcased several capabilities the North must master if it were ever to actually try to unleash them at the United States.

Continuing his efforts to work with China to peacefully force North Korea to end its nuclear program, the president tweeted on Wednesday, “Just spoke to President Xi Jinping of China concerning the provocative actions of North Korea. Additional major sanctions will be imposed on North Korea today. This situation will be handled!” Secretary of State Rex Tillerson said the U.S. could target financial institutions doing business with North Korea.

In September, the U.S. drafted a U.N. resolution calling for a complete oil embargo along with an asset freeze and travel ban on North Korea’s leader Kim Jong Un — a measure that had the support of U.S. allies but was met with resistance from China. Diplomats now say the U.S., along with Western nations and Japan, will be looking to increase pressure with tougher sanctions as a last resort to diplomatic and economic measures.

U.K. Ambassador Matthew Rycroft said, “The latest missile launch is not a one-off. It follows 19 previous launches this year, and North Korea’s sixth nuclear test in September. The latest violation demonstrates, once more, North Korea’s disregard for our collective security and the international obligations, that all of us, as law-abiding states, take upon ourselves.”

North Korea’s state-run television claimed that it had successfully tested a new type of intercontinental ballistic missile (ICBM) that could reach all of the U.S. mainland.

North Korea has been under U.N. sanctions since 2006 due to its ballistic missiles and nuclear programs.

France’s Ambassador Francois Delattre called for tighter sanctions saying that the threat posed by North Korea, “has shifted from being regional to global, from being potential to immediate.” He said that France’s President Emmanuel Macron just called for an increase sanctions on North Korea after the missile test.

“Confronted with such a threat and challenge from North Korea, weakness or ambiguity are simply not an option,” Delattre said, adding that France favors tightening the sanctions with strong additional measures.

Italy’s Ambassador Sebastiano Cardi told CBS News, “Sanctions are working because we know of the constraints they are putting on the regime which is going short of foreign currency … We can do more also in terms of implementation.”

…At the U.N. Security Council meeting, China’s Deputy Ambassador to the United Nations, Wu Haitao, pushed back on the call for China to do more, calling for less confrontation with Pyongyang.

…President Trump himself had talked about dialogue before the recent launch, and the international watchdog agency’s chief, Yukiya Amano told CBS News that, if that day came, the agency would be ready to inspect North Korea’s nuclear sites.

Ambassador Haley concluded with both a warning and a word of reassurance to the leaders in Pyongyang, “we have never sought war with North Korea, and still today we do not seek it. If war does come, it will be because of continued acts of aggression like we witnessed yesterday.”

1. Why did the U.S., Japan and South Korea call for an emergency meeting of the U.N. Security Council on Wednesday?

3. Why must China take more responsibility with sanctions on North Korea?

4. a) What statement did Ambassador Haley make about war with North Korea?
b) Watch the first video clip under “Resources” from Nikki Haley’s speech at the Security Council. What is your reaction to this assurance?

Russia’s Ambassador Vassily Nebenzia added to the Security Council’s condemnation, saying, “Russia does not accept the claims of the DPRK for obtaining the status of a nuclear power… At the same time, it is obvious to us that there is no military solution to the problems of the Korean Peninsula… in the current situation, we urge all parties involved to end the escalation of tension.” He then re-introduced the proposal made by Russia and China for a “double freezing” in which North Korea suspends testing and the U.S. and South Korea reduce the “scope and intensity” of joint military exercises, which, he said “would open the way for a discussion of the principles of peaceful coexistence between Washington and Pyongyang and the resumption of inter-Korean dialogue.”

Through the two terms each of Presidents Bill Clinton, George W. Bush and Barack Obama, dialogue, discussions, and negotiations in the “Six Party Talks” utterly failed in preventing North Korea from developing nuclear weapons and the ballistic missiles necessary to deploy them.

The Trump administration is taking a much tougher approach – and most notably persuading even Russia and China to impose more sanctions against North Korea than they have ever done. President Trump refers to Kim Jong Un as “Little Rocket Man” – and his ultimate goal is to force North Korea to completely denuclearize. Trump’s opponents, including some Republican politicians and commentators (who are embarrassed by his manner of speaking) blame the president for causing Kim Jong Un’s belligerence.

Watch Ambassador Haley’s speech at the emergency Security Council meeting (see the video under “Resources” below) and discuss with a parent:  Do you think the Trump administration’s strategy will succeed? or do you think President Trump should try the same approach of negotiations with North Korea that the previous presidents did?  Please explain your answers.

Watch a short clip from Ambassador Haley’s speech at the Nov. 29 emergency meeting of the UN Security Council: