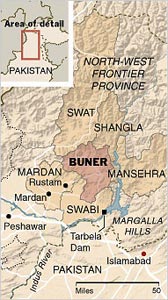 (by Raza Khan and Christina Bellantoni, The Washington Times) – ISLAMABAD, Pakistan – The Obama administration is considering expediting aid to Pakistan, where militants are advancing on the capital and posing a threat to a cluster of strategic installations, including a major dam, a key bridge and the country’s largest weapons and ammunition complex.

Pakistani military analysts say militants could bring normal life to a halt in a large part of Pakistan if they move against the Tarbela dam. The world’s largest earthen dam, it is located on the Indus River about 30 miles northwest of the capital in the districts of Swabi and Haripur.

The Taliban is already next door in Buner district, where the Pakistani army launched a major operation Tuesday. Pakistani jets and helicopters bombed Taliban positions, and troops and heavy artillery also participated. Army spokesman Maj. Gen. Athar Abbas estimated that the operation against about 500 insurgents would take about a week.

He also played for reporters tapes of phone conversations in which Taliban leaders said a purported withdrawal from Buner was a fake to impress the media, and a peace deal with government forces in the Swat Valley was also a trick.

Gen. Abbas said the capital was secure despite these developments.

“Militants cannot reach here,” he said. “It is not a matter of distance … but there are many other factors. We have a foolproof system in place to check any such activity or threat.”

However, a senior Obama administration official told reporters in Washington on Tuesday that he is “very worried” about Pakistan and that the administration would support [sending emergency funds to Pakistan].

The official said members of Congress who recently visited the region “came back alarmed at what they saw and what they heard and wanted to fast-track the money to help get these things started.” …

The U.S. has proposed giving Pakistan $1 billion in emergency aid and $1.5 billion a year in economic aid annually for five years.

Bruce Riedel, a former CIA specialist on South Asia who chaired the Obama administration’s recent review of policy toward Afghanistan and Pakistan, said the Pakistani government and army are still not coming to grips with the crisis.

Some officials are in denial, he said. Others recognize the Frankenstein’s monster Pakistan created two decades ago to fight the Soviets in Afghanistan but “have come to the conclusion that the best solution is to hide in the closet lest they be devoured,” Mr. Riedel said.

Mr. Riedel said Pakistan’s nuclear arsenal, which he said numbered about 100 weapons, was secure for now.

“The Pakistani army has a very sophisticated command and control system to protect the nukes, which are dispersed around the country,” he said. “Warheads and fissile material are kept separate and they use underground installations. This is not something the Taliban can threaten easily.”

The Tarbela dam is used for irrigation and flood control as well as for generating thousands of megawatts of electricity. Security specialists say the Taliban could threaten to destroy the dam as a bargaining chip to gain more concessions from the government, which agreed to the imposition of Shariah law in the scenic Swat Valleyand the surrounding Malakand region in return for a now-unraveling peace deal. If the dam is destroyed, millions of acres of crops would be flooded.

“Given the track record of Taliban in Afghanistan, who are from the same stock as Pakistani Taliban, they would definitely try to destroy strategic installations and assets,” Ashraf Ali, a Peshawar-based analyst, told The Washington Times. “In fact, Pakistani Taliban have been more obstinate and they have destroyed important government installations at will and without any qualms in Swat.”

Only 300 to 350 armed personnel are guarding the Tarbela dam.

“We basically depend on the intelligence reports from the government, but at present neither is there any threat nor have we been conveyed by the authorities concerns about any risk element,” Hazrat Umar, the chief engineer at the dam, told The Times.

However, security officials in the North West Frontier Province, who spoke on the condition of anonymity, said the Taliban is already present in significant numbers in Swabi district.

Moreover, there is a history of Taliban attacks at Tarbela and on other dams.

On Sept. 14, 2007, at least 20 members of the Pakistan Army Special Services Group (SSG) were killed and dozens injured in an explosion at the officers mess at a base inside the dam premises. The attack, which was blamed on the Taliban, appeared to be revenge for the participation of an SSG company in breaking a militant siege at the Red Mosque in Islamabad in July of that year in which more than 100 militants were killed.

…Members of the Tehreek-e-Taliban Pakistan (TTP) have destroyed about 200 schools in Swat and a multibillion-dollar ski resort, the lone such facility in the country, as well as many government installations.

Besides the Tarbela dam, another vulnerable target is Attock Bridge. Located in the Swabi district, it crosses the Indus and connects northwestern Pakistan with Punjab province, the most populous in the country.  If the Taliban took control of the bridge, it could cut Pakistan in two.

“This may be on the mind of militants because this may give them an unchallenged position, at least in the northwest,” Mr. Ali said.

The presence of the Taliban in Buner and an area called Kala Dhaka in Manshera district jeopardizes the security of Pakistan’s biggest military-industrial complex… About 27 miles from Islamabad, … the sprawling complex … produc[es] conventional arms and ammunition.

“Presently Taliban are in Buner and certain parts of Manshera districts,” said retired Brig. Gen. Mahmud Shah, a leading security analyst. “Now from Manshera they can go to Haripur and Hasanabdal and onwards to Islamabad.”

[Near the military weapons complex is] another military-industrial complex. The backbone of Pakistan’s engineering industry for the armed forces, the facility produces tanks, armored vehicles and other heavy military hardware.

The government has not announced a plan to safeguard these installations.

An Interior Ministry spokesman, who spoke on the condition that he not be named, said the Taliban would not be able to penetrate the facilities.  “Due to the changing security situation, the security of these installations has been further increased and security forces are fully equipped and ready to deal with any situation,” he said.

Mr. Riedel expressed concern, however, about whether the Pakistani army would be willing to kill large numbers of the Taliban.

“The officer corps is afraid that if you ask the rank and file to fire on the Taliban too much, the whole army might disintegrate,” he said. He noted that militants in Punjab are often the “brothers” of Pakistani soldiers.

– Christina Bellantoni reported from Washington. Nasir Khan in Islamabad and Barbara Slavin in Washington also contributed to this report.

1. a) How do the Obama administration and Congress view the Taliban’s actions in Pakistan?
b) How do they plan to help the Pakistani government fight the Taliban?

2. a) Who is Bruce Riedel?
b) What is a major problem with Pakistan’s government and army, according to Mr. Riedel?

3. Why does Mr. Riedel say Pakistan’s nuclear weapons are not a cause for immediate concern?

4. a) What is the Tarbela dam used for?
b) What will happen if the Taliban destroys the dam?
c) Why is the Taliban believed to be capable of doing such a thing to their own countrymen?

5. a) What other important structure is in danger of coming under Taliban control?
b) How would this affect the country?

6. How is the Pakistani government reacting to threats to its military weapons and vehicle facilities?

7. What concern do Pakistani military officers have with ordering their men to fight the Taliban?

Read about the Taliban and other terrorist groups in Pakistan at cfr.org/publication/15422.