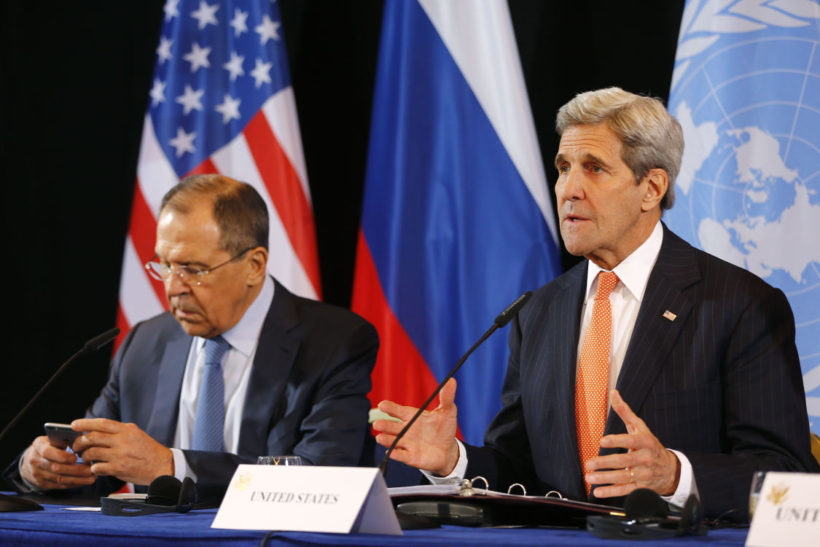 (from the Associated Press at NY Post) DAMASCUS, Syria — The United States and Russia have agreed on a new ceasefire for Syria that will take effect Saturday, even as major questions over enforcing and responding to violations of the truce were left unresolved. Syria’s warring government and rebels still need to accept the deal.

The timeline for a hoped-for breakthrough comes after the former Cold War foes, backing opposing sides in the conflict, said they finalized the details of a “cessation of hostilities” [ceasefire] between Syrian President Bashar al-Assad’s government and armed opposition groups after five years of violence that has killed more than 250,000 people.

The truce will not cover the Islamic State [ISIS] group, the al Qaeda-linked Nusra Front and any other militias designated as terrorist organizations by the UN Security Council. But where in Syria the fighting must stop and where counterterrorism operations can continue must still be addressed. And the five-page plan released by the US State Department leaves open how breaches of the ceasefire will be identified or punished. Syrian President Bashar al-Assad. Assad has been in power for 15 years since taking over from his father, Hafez al-Assad (president from 1971 until his death in 2000).

The announcement came after President Barack Obama and Russian President Vladimir Putin spoke by telephone Monday, capping weeks of intense diplomacy to stem the violence so that Assad’s government and “moderate” rebel forces might return to peace talks in Geneva. A first round of indirect discussions collapsed almost immediately this month amid a massive Assad government offensive backed by Russian airstrikes in northern Syria.

President Obama welcomed the agreement in the call with Putin that the White House said was arranged at the Russian’s request. The White House said Obama emphasized the key is to ensure that Syria’s government and opposition groups faithfully implement the deal. In this photo released by the Syrian official news agency SANA, residents gather at the scene where two blasts exploded in the pro-government neighborhood of Zahraa, in Homs province, Syria, Sunday, Feb. 21, 2016. The city is almost completely controlled by the Syrian government, and has regularly been targeted by attacks. (SANA via AP) Damaged buildings in the rebel-held Ansari district of the northern Syrian city of Aleppo. AFP

Officials in Washington stressed the challenges still ahead. “This is going to be difficult to implement,” said White House spokesman Josh Earnest. “We know there are a lot of obstacles, and there are sure to be some setbacks.”

Putin called the agreement a “real step forward that can stop the bloodshed.” Speaking on Russian television, he said Moscow would work with the Syrian government, and expects Washington to do the same with the opposition groups that it supports.

UN Secretary-General Ban Ki-moon also welcomed the agreement, saying it is “a long-awaited signal of hope to the Syrian people.” But he warned that much work lies ahead for its implementation.

The leader of a Saudi-backed Syrian opposition alliance said in a statement that rebel factions have agreed “in principle” to an internationally mediated temporary truce. Riad Hijab did not elaborate but urged Russia, Iran and the Assad government to end attacks, lift blockades and release prisoners held in Syria.

Syrian officials said the government was ready to take part in a truce as long as it is not used by militants to reinforce their positions.

Both sides have until Friday (Feb. 26) to formally accept the plan.

Even if the ceasefire takes hold, fighting will by no means halt.

Russia [is expected to] press on with an air campaign that it insists is targeting terrorists but which the US and its partners say is mainly killing moderate rebels and civilians. While Islamic State (IS) tries to expand its self-proclaimed caliphate in Syria and neighboring Iraq, Nusra is unlikely to end its effort to overthrow Assad. The Kurds have been fighting IS, even as they face attacks from America’s NATO ally Turkey. And Assad has his own history of broken promises when it comes to military action.

All of these dynamics make the truce hard to maintain.

“We are all aware of the significant challenges ahead,” US Secretary of State John Kerry said. “Over the coming days, we will be working to secure commitments from key parties that they will abide by the terms.” Secretary Kerry said the cessation could lead to less violence, expanded humanitarian deliveries and help support the US goal of a “political transition to a government that is responsive to the desires of the Syrian people.” Like previous US-Russian statements, however, Monday’s document says nothing about Assad’s future — perhaps the biggest stumbling block to a sustained peace.

The plan largely follows the blueprint set by Washington, Moscow and 15 other countries at a conference in Germany earlier this month. That agreement called for a truce by Feb. 19, a deadline that was missed.

Beyond the new ceasefire date, the agreement sets up a “communications hotline” and, if needed, a working group to promote and monitor the truce. Violations are to be addressed by the working group with an eye toward restoring compliance and cooling tensions. The deal also calls for “non-forcible means” to be exhausted before other means are pursued for punishing transgressors.

Any party can report violations to the working group being co-chaired by the US and Russia.

The two countries also will share “pertinent information” about territory held by rebels accepting the truce.

The timing of the ceasefire is only days ahead of Moscow’s proposal earlier this month for it to start on March 1. Washington rejected that offer at the time, saying it wanted an “immediate ceasefire” and not one that would allow Syria and its Russian backer to make a last-ditch effort for territorial gains in the Arab country’s north and south.

While negotiations dragged, however, Russian airstrikes pummeled areas in and around Aleppo, Syria’s largest city, and Assad’s military made significant gains. …

The Syrian government’s supply route by land to the city of Aleppo was cut by heavy fighting Monday as the army, supported by allied militias and the Russian air force, fought to consolidate its recent gains. They are trying to seal the border with Turkey, a key supporter of the rebels, before a truce is reached.

[NOTE: The Wall Street Journal reported on Feb. 23: “President Barack Obama’s top military and intelligence advisers don’t believe Russia will abide by a just-announced cease-fire in Syria and want the administration to ready plans to increase pressure on Moscow by expanding covert support to rebels fighting the Russian-backed Assad regime.”]

From the Associated Press. Reprinted here for educational purposes only. May not be reproduced on other websites without permission from the New York Post.

NOTE TO STUDENTS: This is a complicated story. As you read, circle the names of people (officials, leaders, experts) and dates. Underline or highlight key words and phrases. When you read it a second time, you can easily see which points you identified as important. After reading this article, you will know more than most people about why establishing peace in Syria is so challenging.

1. a) When will the U.S.-Russia brokered ceasefire in Syria take effect?
b) What still needs to happen for the deal to take effect?
c) By what date must the two sides formally accept the plan?

2. What groups are not covered in the ceasefire agreement?

4. a) What is the purpose of the ceasefire? (see para. 4)
b) Why had the first round of talks collapsed earlier this month?

5. What did Russian President Vladimir Putin say about the agreement and what Russia and the U.S. have to do?

7. Secretary Kerry said the cessation could lead to less violence, expanded humanitarian deliveries and help support the US goal of a “political transition to a government that is responsive to the desires of the Syrian people.” What is the biggest stumbling block to a sustained peace?

8. What will happen after both sides formally accept the plan?

CHALLENGE: Read “Syria: The Story of Conflict” by BBC News for more background on the Syrian war.
List 5 facts that you think are most important to understanding this conflict.

“I hope there will be no ceasefire, because if there is a ceasefire, Turks will increase their support for criminals and traitors,” said Ahmad al-Omar, who is from Aleppo province in the north, adding that Turkey may let opposition fighters in through its border with Syria. The Associated Press reported from the bazaar on a government-approved visit.

But rebels who engage in violence could see their Western support cut off. In recent days, US officials have spoken about the ceasefire being a “self-policing” mechanism. If a group fights Assad’s military, according to this logic, it essentially aligns itself with militants considered to be terrorists and can then be attacked.

That has the opposition concerned about Assad or Russia trying to provoke it into acts of self-defense.

The conflict began with violent government repression of largely peaceful protests in 2011 but quickly became a full-blown rebellion against Assad and a proxy battle between his Shiite-backed government and Sunni-supported rebels. A US-led coalition is only attacking the Islamic State and other extremist groups, not Assad’s military. (from the Associated Press article)