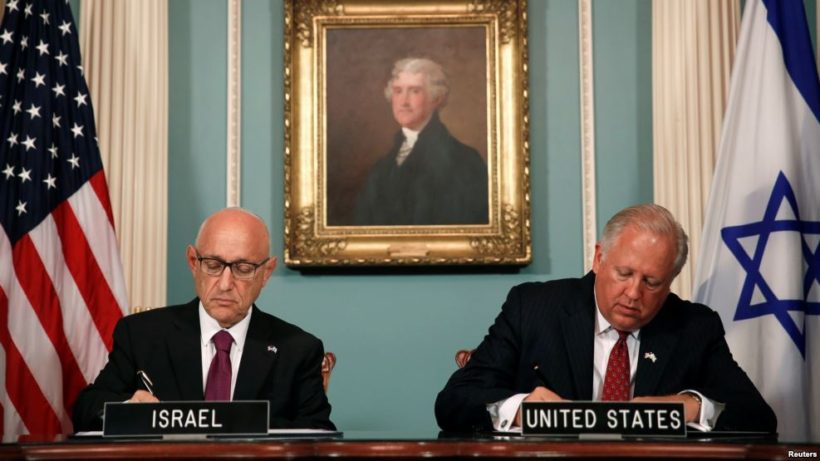 (by Matt Spetalnick, Reuters) WASHINGTON — The United States will give Israel $38 billion in military assistance over the next decade, the largest such aid package in U.S. history, under a landmark agreement signed on Wednesday.

The deal, whose details were reported by Reuters earlier, will allow Washington’s chief Middle East ally to upgrade most of its fighter aircraft, improve its ground forces’ mobility and strengthen its missile defense systems, a senior U.S. official said.

While the package constitutes the most U.S. military aid ever given to any country, it entails concessions by Israeli Prime Minister Benjamin Netanyahu, according to officials on both sides.

Those include Israel’s promise not to seek additional funds from Congress beyond what will be guaranteed annually in the new package, and to phase out a special arrangement that has allowed Israel to spend part of its U.S. aid on its own defense industry instead of on American-made weapons, the officials said.

Nearly 10 months of drawn-out aid negotiations underscored continuing friction between President Barack Obama and Netanyahu over last year’s U.S.-led nuclear deal with Israel’s arch-foe Iran, an accord the Israeli leader opposed. [The Iranian government has called for the destruction of Israel on numerous occasions. It is believed that once obtained, the Iranian government would use nuclear weapons against Israel.] The United States and Israel have also been at odds over the Palestinians.

But [Prime Minister] Netanyahu decided it would be best to forge a new arrangement with [President] Obama, who leaves office in January, rather than hoping for better terms from the next U.S. administration, according to officials on both sides.

A new pact now allows him to avoid uncertainties surrounding the next president, whether Democrat Hillary Clinton or Republican Donald Trump, and to give Israel’s defense establishment the ability to plan ahead.

Obama’s aides wanted a new deal before his presidency ends, seeing it as an important part of his legacy. Republican critics accuse him of not being attentive enough to Israel’s security, which the White House strongly denies, and of taking too hard of a line with the Israeli leader.

“Prime Minister Netanyahu and I are confident that the new MOU will make a significant contribution to Israel’s security in what remains a dangerous neighborhood,” Obama said in a written statement.

The agreement was signed at the State Department by U.S. Undersecretary of State Thomas Shannon and by Jacob Nagel, acting head of Netanyahu’s national security council.

According to a White House “fact sheet,” the deal includes:

2. List the three main provisions contained in the agreement.

3. a) Define concessions.
b) What concessions has Israeli Prime Minister Netanyahu made in the agreement?

4. For what reasons has Prime Minister Netanyahu signed this agreement now?

5. Why did President Obama want to make this agreement now?

6. a) What do Republicans accuse President Obama of doing in regard to our longtime ally Israel?
b) Ask a parent or a grandparent: do you think this is a fair assertion? Please explain your answer.

8. Ask a parent:
a) How important do you think it is for the U.S. to support our historic ally Israel?
b) Do you support the deal the Obama administration made with Israel? Why or why not?
Please explain your answers.

For background, read “Roots of the U.S.-Israel Relationship” at jewishvirtuallibrary.org.