U.S. heroes to be honored this week 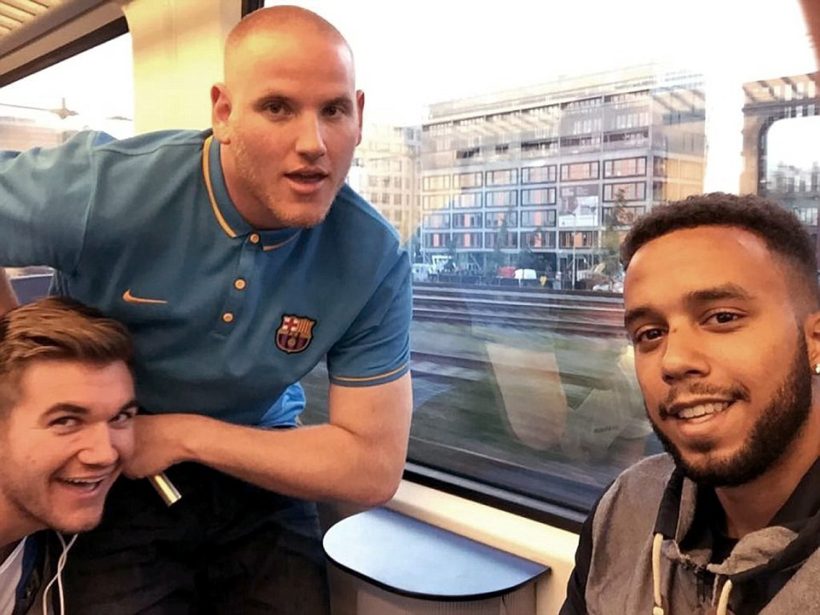 (by Victoria Cavaliere, Reuters) LOS ANGELES — Three young men who disarmed a suspected Islamist militant on a high-speed train in France will be honored with a parade in their hometown in California this week, officials said, as the last of the trio returned to the United States on Thursday.

The three friends, Anthony Sadler, 22, Spencer Stone, a 23-year-old U.S. airman, and Alek Skarlatos, 22, a National Guardsman, charged the gunman on a train headed to Paris from Amsterdam on Aug. 21, helping to wrestle away a pistol and an AK-47 assault rifle.

The efforts of the three Americans, along with Briton Chris Norman, earned them France’s highest honor, the Legion d’honneur.

Sacramento Mayor Kevin Johnson announced on Thursday that a parade honoring the men, who grew up in the Sacramento area and attended middle and high school together, was set for Friday, Sept. 11.

“Our community has been anxiously awaiting the return of our three hometown heroes – Anthony, Alek and Spencer – so that we can celebrate and honor their incredible courage,” he said in a statement.

The parade will also honor the victims and first responders who died in the Sept. 11, 2001, terrorist attacks on New York City and Washington, the mayor’s office said.

Stone, whose thumb was almost severed by the attacker in France, was the last of the three friends to return to the United States, arriving on Thursday after receiving medical treatment at a U.S. Army hospital in Germany.

Stone has also been credited with saving the life of another train passenger who had been shot and was bleeding profusely.

Sadler, Skarlatos and Stone were touring Europe, partly to celebrate Skarlatos’ return from duty in Afghanistan, when they noticed accused gunman Ayoub el Kazzani, [a 26-year-old Moroccan national.  They immediately took action, tackled him, took control and prevented him from killing anyone.] …

Sadler, a senior kinesiology major at Sacramento State University, was to be thanked for his actions by school president Robert S. Nelsen.

1. Name the three Americans who thwarted a terrorist attack on a train in France recently.

2. How did the French government honor the Americans’ bravery (as well as that of two other men who were involved: see “Background”)?

3. How will the Americans’ hometown of Sacramento honor them on September 11th?

4. In addition to thwarting the terrorist’s attack, what else is Spencer Stone credited with doing?

5. How will each young man be individually honored by his military unit or college?

6. This is a Reuters news service article. What problem do you see with the reporter’s description of the gunman in paragraphs 1 and 9?

7. Watch the videos under “Resources.” How do the three American friends’ actions inspire you?

The thwarting of the terrorist attack explained: From a news report at London’s Daily Telegraph on Aug. 24:

An American-French citizen has been identified as one of the passengers who acted to halt the attack on a Paris-bound train on August 21.

Mark Moogalian, 51, an American-born professor at the Sorbonne, noticed something odd about the way a young man had brought a suitcase into the bathroom of the train, and when the man exited with a Kalashnikov, the academic was one of the first of several people to halt what could have been a deadly attack. A number of people were injured and the alleged gunman is being questioned by investigators. Moogalian was shot attempting to tackle the gunman, his wife said.

At a ceremony on Monday, French president François Hollande presented three Americans and a Briton with France’s highest honor for subduing the gunman, while Moogalian was being treated in Lille for the injuries he sustained during the attack.

He is expected to recover and will receive the Légion d’honneur later. A young French banker who also intervened has asked for anonymity and will also be presented with the award, but at a private ceremony.

Moogalian’s wife Isabella Risacher-Moogalian was on board the train, which was carrying more than 500 passengers. She told Europe1 that her husband was suspicious of the amount of time the gunman had spent in the bathroom and rushed him when he came out, armed with a gun.

“I did not see my husband get shot; it happened too quickly and I was pretty much hiding behind seats,’ Risacher-Moogalian said. “But I look at my husband through the seats at an angle and he looked straight at me and said, ‘I’m hit!’ …

“There was blood everywhere. I ran towards him and I could see that he had a wound on his back. I then saw another wound by his neck.”

Spencer Stone, an off-duty soldier American soldier who helped stop the gunman, tended to Moogalian with first aid after he and two of his American friends tackled el-Khazzani. British IT consultant, Chris Norman, 62, helped restrain the gunman with his necktie.

“He [Stone] put his finger on the wound in the middle of his [Mooglian’s] neck and he stayed in that position for the whole journey until we got to Arras so I think he really saved my husband’s life,” Risacher-Moogalian told BFM TV.

Watch a video of the three American heroes at a press conference with the U.S. Ambassador to France, Jane Hartley, on August 23rd:

And on August 24, 2015, France’s President François Hollande awarded them the Legion of Honor, France’s highest award: