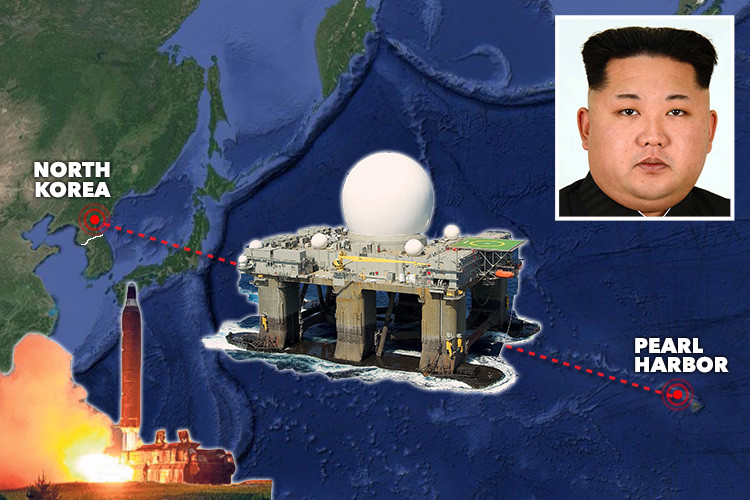 Dispatching the “SBX” out to sea sends “a very clear strategic message of deterrence to the ICBM threat of the North Korean leader that has intensified since first announced on Jan. 1,” said Riki Ellison, chairman of the Missile Defense Advocacy Alliance, a Virginia-based nonprofit that advocates a strong U.S. missile defense.

Media sources reported that the SBX was being sent about 2,000 miles northwest of Hawaii to watch for a possible North Korean launch in coming months. The Pentagon downplayed the floating radar’s Monday departure.

“The SBX’s current deployment is not based on any credible threat; however, we cannot discuss specifics for this particular mission while it is underway,” Navy Cmdr. Gary Ross, a Defense Department spokesman, said in an email. Kim Jong Un said in a Jan. 1 speech that North Korea was prepping for an ICBM test launch.

“The SBX deployed in the Pacific Ocean enhances and boosts the probability of kill for each of the current 37 and soon to be 44 (ground-based interceptors) in both Alaska and California, if fired at a North Korean ICBM,” Ellison said Thursday in an MDAA release.

If the North Korean test ICBM does not target U.S. or allied territory, the SBX would be in a position “to collect invaluable precision data on the warhead and debris of a North Korean ICBM test-flying in space,” the release said.

Defense Secretary Ash Carter also suggested this week that the United States might just monitor the launch if it didn’t appear to be a threat.

The more than 280-foot-tall SBX is topped by a golf ball-like dome containing a phased array radar and is a hard-to-miss sight at its mooring off Ford Island. The powerful radar, which is only operated at sea, acquires, tracks and discriminates the flight characteristics of ballistic missiles.

Both the White House and State Department have said that North Korea hasn’t yet demonstrated the ability to miniaturize a nuclear warhead and put it on an ICBM.

“But we do know that he (Kim) continues to want to have those capabilities” and that his programs “continue to march in that direction,” State Department spokesman John Kirby said Jan. 3.

South Korean media previously reported that the SBX radar was deployed in late September to an area off the Korean Peninsula. Concerns over North Korea’s nuclear program led to the deployment of the SBX in 2009 and 2013, according to the Union of Concerned Scientists.

The group said in a July report that the $2.2 billion SBX is designed for long-range precision tracking and discrimination of warheads from other objects, but it “has a number of serious limitations, including a very limited electronic field of view.”

Based on shortcomings of the SBX, the U.S. Department of Defense’s Missile Defense Agency announced plans to develop by 2020 a long-range discrimination radar in Alaska, the scientific group said.

Ellison said North Korea has tested six long-range rockets since 1998 with speeds similar to an ICBM. North Korea said a launch in February 2016 was intended to put a satellite in orbit.

“North Korea most likely wants to demonstrate through this (upcoming) test its warhead design and the re-entry capability of a successful ICBM launch in order to validate its strategic nuclear force,” Ellison said.

Reprinted here for educational purposes only. May not be reproduced on other websites without permission from Honolulu Star-Advertiser.

3. a) For what reason did the military deploy the SBX from Pearl Harbor?
b) What is the purpose for the deployment?

4. What did DoD spokesman Navy Cmdr. Gary Ross say about the deployment?

5. What concerning and assuring information does the White House and State Department know about North Korea’s nuclear program?

6. What is the U.S. Missile Defense Agency doing to combat the problems with the SBX?

CHALLENGE QUESTION:
Conservative Republicans generally support the position of peace through strength (which includes nuclear deterrence). Read about it here and here.
Liberal Democrats take an opposing view and generally support the idea of reducing/eliminating nuclear weapons worldwide. Read about it here and here.
With which policy do you agree? Explain your answer. Discuss with a parent.

A ballistic missile is a missile that follows a sub-orbital ballistic flightpath with the objective of delivering one or more warheads (often nuclear) to a predetermined target. The missile is only guided during the relatively brief initial powered phase of flight and its course is subsequently governed by the laws of orbital mechanics and ballistics. To date, ballistic missiles have been propelled during powered flight by chemical rocket engines of various types. (from wikipedia/Ballistic_missile)