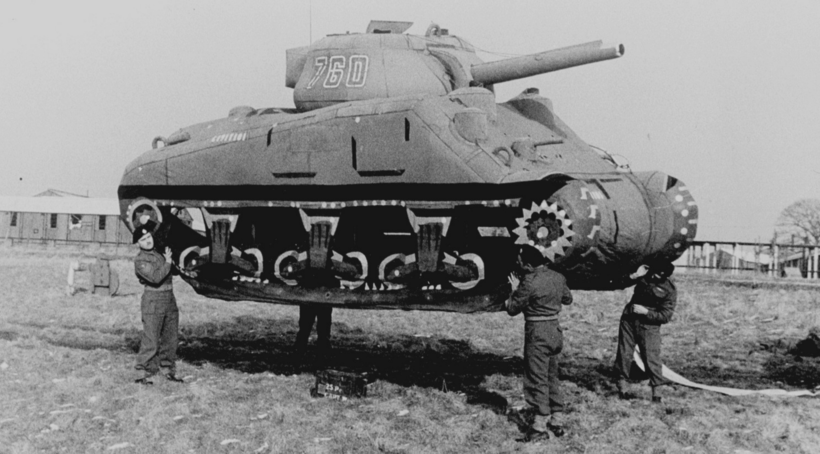 As a member of the Army's top-secret "Ghost Army" during World War II, Harper College's Bernie Bluestein was one of the artists who used realistic decoys, such as this inflatable rubber tank, to trick the Nazi troops. - Photo courtesy of Bernie Bluestein

(by Steve Zalusky, Chicago Daily Herald) – …In 1944, the 23rd Headquarters Special Troops — better known today as the Ghost Army — swept across Europe from Normandy to the Rhine.

Artists like Schaumburg, Illinois resident Bernie Bluestein were among the recruits for the 1,100-man unit, whose main weapon was deception.

Using inflatable and wooden tanks, trucks, artillery and airplanes, blasting military sound effects over loudspeakers, and sending phony signals to aid their efforts, the Ghost Army acted as decoys, attracting the attention of the enemy while allowing fellow Allied troops to carry out their missions.

In the process, they put themselves in harm’s way.

“That was our mission, to deceive the Germans,” said Bluestein, who has continued his art studies at Harper College for the past 30 years. “If there was a big unit of Germans that were heading toward Americans, we distracted them with our equipment — we would set up our dummies — so they would think that we were the real army. So we were sitting ducks, really.”

“We built imitation things. We built tanks, jeeps, trucks, guns, everything out of wood,” said Bluestein. “And when they took photographs from the air, it looked like the real things.”

Later, the wood decoys were replaced with inflatable rubber dummies.

In September, the 95-year-old Bluestein returned to the scenes of his World War II exploits, as part of a Ghost Army tour. He received a hero’s welcome at stops along the way. Bernie Bluestein, 95, is a Ghost Army veteran. He was an 18-year-old art student when he joined the super-secret Ghost Army during World War II.

At the Luxembourg American Cemetery, he received a medal from the U.S. Veterans Friends Luxembourg. And in Bastogne, Belgium, he was presented a plaque by the Belgian Army soldiers who now man that historic site.

The two-week tour also visited sites in England, France and Germany. Bluestein was the only Ghost Army soldier on the tour, and is one of only about 20 to 30 of its members still alive.

“The entire trip was just a very emotional trip for me. A once-in-a-lifetime trip for me,” he said.

Beyer directed a PBS documentary about the unit and co-authored the book “The Ghost Army of World War II,” that brought the anonymous heroes out of the shadows.

Published at Chicago’s Daily Herald on November 9. Reprinted here for educational purposes only. May not be reproduced on other websites without permission from dailyherald .com.

1. For ILLINOIS, give the following information:
a) capital:
b) location and adjoining states:
c) the population:

2. What was the purpose of the Ghost Army in WWII?

3. Describe the type of equipment the Ghost Army used to fool the Germans.

4. How dangerous was the Ghost Army’s mission?

5. Why does Ghost Army historian Rick Beyer, who wrote a book and directed a PBS documentary about the unit, think they saved thousands of lives?

6.The soldiers in this unit were ordered not to tell anyone about their mission. It was kept a secret for decades.
a) Do you think it should have been made public? Why or why not?
b) What is your reaction to the fact that the 1,100 soldiers and others involved kept it secret for so many years?

Bluestein’s path to the European Theater began as a student at the Cleveland School of Art. After becoming eligible for the draft, he saw a bulletin about a new Army unit that needed artists. He took a required camouflage course and enlisted.

After D-Day, Bluestein headed with the Ghost Army first to Normandy and then across Europe, eventually reaching Luxembourg during the Battle of the Bulge. He later saw heavy action during Operation Viersen in March 1945. Stationed along the Rhine River, the Ghost Army simulated two divisions to distract the enemy as the 9th Army crossed the river elsewhere.

The distraction included using loudspeakers as they pulled into the German city Viersen at dusk to create the sound of a large number of troops pulling into town.

The German army shelled the town the next morning, an experience Bluestein escaped unharmed but calls “terrifying.”

“Here is a guy that didn’t want to be shot at, but I’m saying to these guys across the way, my enemies, ‘Here I am, shoot at me.’ That’s exactly what they did,” he said. “So our mission was very successful.”

During his tour in September, Bluestein visited the Luxembourg American Cemetery and Memorial, where he saw the grave of Sgt. George Peddle, a Ghost Army soldier killed in action. Peddle was among three members of the unit killed in action, Beyer said.

Bluestein also helped dedicate the first Ghost Army historical marker, located in the town of Bettembourg, Luxembourg. It marks the spot where the 23rd carried out Operation Bettembourg, helping Gen. George S. Patton defend an undermanned section of his Third Army’s front line. … (From the Daily Herald article above)

Some of the operations of the Ghost Army:

Operation BRITTANY
In July 1944, they tricked the enemy about where General George Patton was headed, helping him to race across France and smash much of the German army.

Operation BETTEMBOURG
In September, they helped held a dangerously undermanned part of Patton’s line as he was attacking the fortress city of Metz. “There is one rather bad spot in my line, but I don’t think the Huns know it” Patton wrote to his wife. “Hlding it now by the grace of God and a lot of guts

Operation KODAK
During the Battle of the Bulge, they conducted a radio deception that helped draw German attention away from the effort to relieve Bastogne.

Operation VIERSEN
In March 1945, they put on a dazzling deception along the Rhine River, their biggest ever, that drew the enemy away from a real crossing by the 9th Army. It earned them a commendation from 9th Army commander William Simpson.

(Note: The PBS website notes: ”The Ghost Army” re-airs December 2018. It is also available at amazon.)