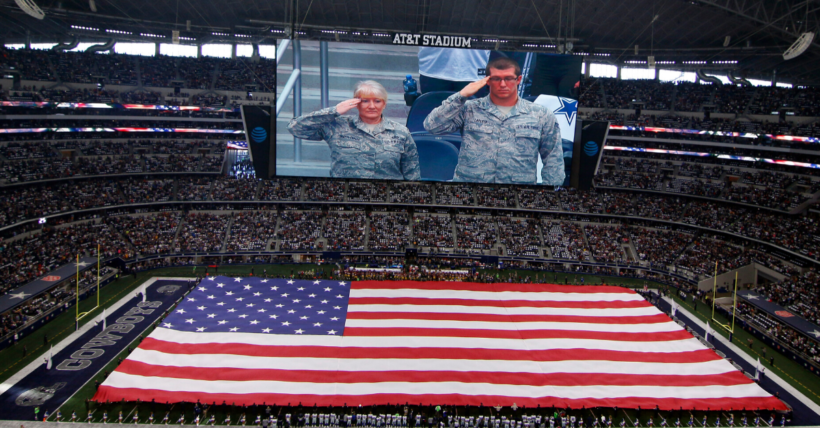 (by Cameron Jenkins, The Hill) – Texas state legislators on Monday voted to approve a bill that would withhold funding from professional sports teams in the state that choose not to play the national anthem before any game or athletic event.

According to Senate Bill 4, also called the “Star Spangled Banner Protection Act,” professional sports teams would forfeit the opportunity to further receive state money and may be required to “repay any money paid to the team by this state or any governmental entity.”

The measure passed in the House by voice vote on Monday and was expected to head to Gov. Greg Abbott’s (R) desk on Tuesday for approval. (The House is made up of 83 Repubicans and 67 Democrats. The unofficial vote was 110 yeas, 34 nays, (the final 6 either absent or present but not voting.)

[The Senate had already approved the bill in April with strong bipartisan support. The Texas Tribune reported ten of the 13 Senate Democrats crossed the aisle and voted with all 18 Republicans in support of the bill. The two opposing votes were cast by Democrats Sen. Sarah Eckhardt, of Austin, and Sen. Nathan Johnson, of Dallas. Democratic Sen. José Menéndez was absent].

Opponents of the bill on Monday argued against the legislation, stating that it could be viewed as unconstitutional.

He previously tried to change the bill into a resolution that would allow the House to take a stand in favor of the anthem, but not enforce that stance with the law.

State Rep. Dustin Burrows (R), who sponsored the bill, pushed back against Democratic arguments that the measure would violate free speech.

“It’s very simple. If [teams] do not want to play the national anthem, they don’t take the tax dollars,” Burrows said, according to The Texas Tribune. “If we’re going to go ahead and subsidize with hard-earned American dollars the sporting facilities and the teams in the different ways that I think is articulated in this bill, then this would apply.”

“Mark Cuban: Your decision to cancel our National Anthem at Dallas Mavs games is a slap in the face to every American & an embarrassment to Texas. Sell the franchise & some Texas Patriots will buy it. We ARE the land of free & the home of the brave.”

Following the Senate’s passage of the bill, Patrick wrote in a statement:

“…Texans are tired of sports teams that pander, insulting our national anthem and the men and women who died fighting for our flag. The passage of SB 4 will ensure Texans can count on hearing the ‘Star-Spangled Banner’ at major sports events throughout the state that are played in venues that taxpayers support. We must always remember that America is the land of the free and the home of the brave.”

Cuban later reversed his decision after the NBA reiterated its policy that requires the playing of the National Anthem before games.

2. To what type of teams does the the Star Spangled Banner Protection Act refer?

3. What specifically will be the result for teams who choose not to play the national anthem?

5. What do the House and Senate vote results tell you about the overall regard for the national anthem? (Regard defined at: a feeling of respect and affection; esteem)

6. Every country has a national anthem. Most/many/all sing their national anthem at their sporting events. The Texas law does not require anyone to sing it, but only for the teams receiving taxpayer dollars to play it as has been the tradition for many years. Do you approve of this bipartisan (supported by both political parties) bill becoming law? Explain your answer.

See previous article with VIDEOS of the Star Spangled Banner:

Watch a performance of the National Anthem

On a snowy Jan. 12, 2016 in West Virginia, prior to the West Virginia – Kansas basketball game, the person scheduled to sing the Star-Spangled Banner was stuck in traffic.  So Carlton Smith, working the game as a University Police Officer, answered the call: