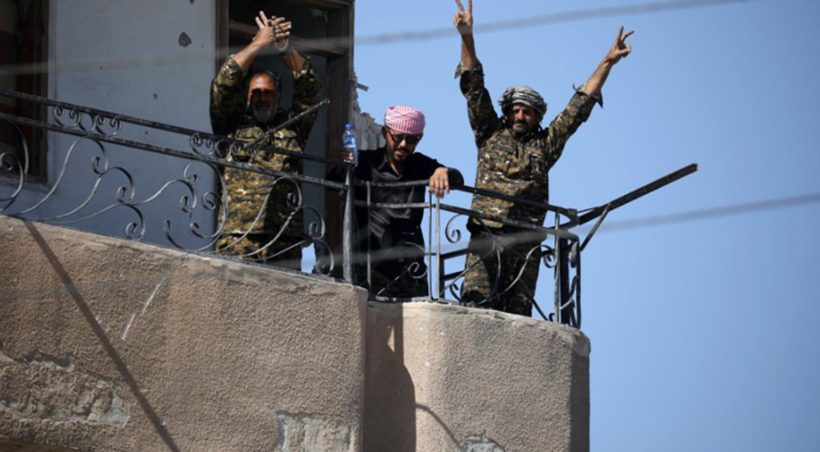 US-backed Syrian Democratic Forces, a combination of Kurdish and Syrian Arab fighters, wrested control of Raqqa last week after four months of fighting. The liberation of Raqqa critical milestone but the U.S. says fight against IS not over (Photo: Reuters)

(By Yaron Steinbuch, NY Post, Oct. 20) – After a four-month-battle, US-backed militias on Friday declared the “total liberation” of Raqqa, the de-facto capital of ISIS in Northern Syria.

Talal Silo, spokesman of the Kurdish-led Syrian Democratic Forces (SDF), claimed a “historic victory” over the jihadists and said the extremist group had suffered a “brutal” defeat, CNN reported.

The SDF handed over administration of the devastated city to a council made up of local officials and tribal leaders and a 3,000-strong US-trained police force tasked with governance and security.

“Our victory is one against terrorism, and the liberation of Raqqa marks the latest chapter in the fight against terrorists in Syria,” Silo said in a soccer stadium where ISIS militants had tortured their opponents.

SDF commanders told CNN that the victory celebration was held at the stadium — to add insult to injury following the extremist group’s defeat there.

“The future of Raqqa will be decided by its people,” he said. “We call upon all countries and peace-loving forces and all humanitarian organizations to participate in rebuilding the city and villages around it and help in removing the scars of war that were inflicted by the (IS) group.”

The United Nations and aid organizations estimate that about 80 percent of the city is destroyed or uninhabitable.

Silo said 655 local and international fighters lost their lives fighting ISIS during the long battle. He said residents will be allowed to start returning to the city once the mines and explosives are removed.

The fall of Raqqa marks a major defeat for ISIS, which has seen its territories steadily shrink since last year.

The extremists took over the city, located on the Euphrates River, in January 2014, and turned it into the epicenter of its brutal rule. Kurdish-led authorities in other parts of northern Syria are already proceeding with plans to establish the federal system in areas they control, kicking off a three-phase election process last month in Kurdish majority regions, according to Reuters.

Syrian President Bashar al-Assad, who is regaining territory with Iranian and Russian military support, has said [he] will recover control over the entire country, which has been fractured by six years of conflict.

1. For Syria, give the following information:

2. For SYRIA:
a) list the who, what, where and when of the news item
b) What percent of Raqqa was destroyed by the ISIS occupation?
c) When will city residents be able to return home?
d) The fall of Raqqa marks a major defeat for ISIS. Read the “Background” below. Do you think the news of European countries’ view of their citizens who joined ISIS in Syria would deter Muslims from being “radicalized” or joining terrorist groups like ISIS? Explain your answer.

SYRIA: The city of Raqqa:

As many as a third of the Europeans (native-born and naturalized citizens) may have returned home. Many are jailed immediately and awaiting trial in backlogged courts, but others are freed and under surveillance.

No government publicly expressed concern about the fate of its citizens who left and joined the Islamic State fighters plotting attacks at home and abroad.

In France, which has suffered repeated violence claimed by the Islamic State — including the Nov. 13, 2015, attacks in Paris — Defense Minister Florence Parly was among the few to say it aloud.

“If the jihadis perish in this fight, I would say that’s for the best,” Parly told Europe 1 radio last week.

Those were the orders, according to the U.S. Brett McGurk, the top U.S. envoy for the anti-IS coalition, in an interview with Dubai-based Al-Aan television said:

“Our mission is to make sure that any foreign fighter who is here, who joined ISIS from a foreign country and came into Syria, they will die here in Syria. So if they’re in Raqqa, they’re going to die in Raqqa,” he said.

The coalition has given names and photos to the Kurdish fighters to identify the foreign jihadis, who are seen as a threat back home and a burden on their justice systems, according to a commander with the Kurdish-led Syrian Democratic Forces. The commander said his U.S.-backed fighters are checking for wanted men among the dead or the few foreigners among the captured.

An official with the Kurdish YPG, the backbone of the SDF that also runs the local security and intelligence branches, said foreigners who decided to fight until the end will be “eliminated.” For the few prisoners, the Kurds try to reach out to the home countries, “and we try to hand them in. But many would not want to take their (detainees),” he said.

No country will admit to refusing to take back citizens who joined the Islamic State, including women and their children. But few are making much of an effort to recover them.

Parly said, “We cannot do anything to prevent their return besides neutralize the maximum number of jihadis in this combat,” she said.

Raqqa’s foreign holdouts are generally acknowledged to be midlevel IS recruits, and most are believed to have little information about the group’s inner workings. U.S. Col. Ryan Dillon, a spokesman for the coalition, said he had no information about any “high-value targets” among approximately 350 fighters who surrendered in Raqqa in the last days, including a few foreigners.

But for their home countries, they pose a risk.

“The general sentiment in northern Europe is we don’t want these people back, but I don’t think anyone has thought about the alternatives,” said Pieter Van Ostaeyen, an expert on the Belgian jihadis.