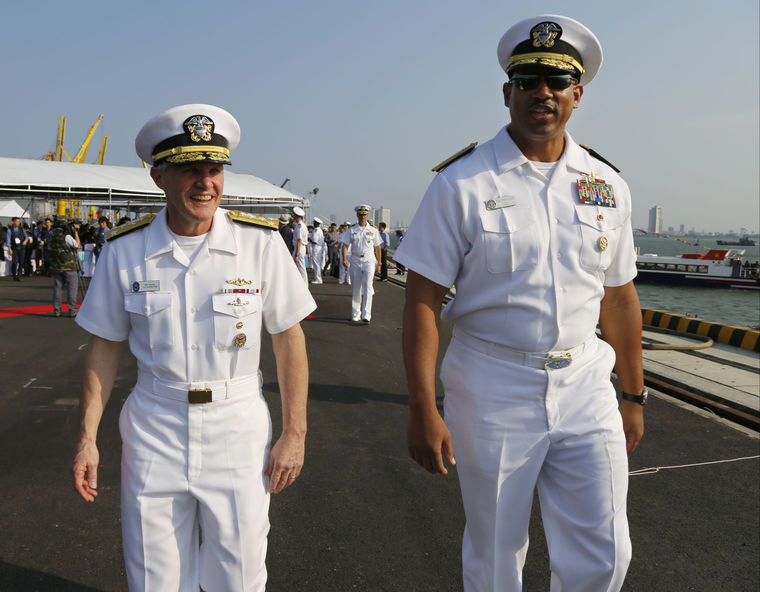 U.S Vice Adm. Phillip Sawyer, commander of the U.S 7th Fleet, and Rear Adm. John Fuller, commander of carrier strike group, walk at Tien Sa port after their press briefing in Danang, Vietnam, Monday, March 5, 2018. For the first time since the Vietnam War, the USS Carl Vinson, a U.S. Navy aircraft carrier, is paying a visit to a Vietnamese port, seeking to bolster both countries' efforts to stem expansionism by China in the South China Sea. (AP Photo/Tran Van Minh)

(by Matt Rivers, CNN) Danang, Vietnam — For the first time since the end of the Vietnam War more than four decades ago, a US Navy aircraft carrier has arrived in the country.

The USS Carl Vinson anchored two nautical miles off the port city of Danang, which was a key battleground during the war that ended in 1975.

“Our nations’ relationship has reached new heights in the past few years, and the USS Carl Vinson’s port visit to Vietnam is a reflection of that,” said US Pacific Fleet Commander Adm. Scott Swift.

Publicly, the United States has portrayed the four-day visit by the Vinson and its contingent of 5,000 sailors and aviators as a historic opportunity to enhance the budding friendship that has emerged between the two former foes.

But it’s far from a standard port call.

Analysts say the visit by the 95,000-ton carrier to Vietnam is a clear shot at Beijing, designed to counter China’s aggressive island building and militarization in the South China Sea. For the first time since the Vietnam War, a US Navy aircraft carrier is paying a visit to a Vietnamese port, seeking to bolster both countries’ efforts to stem expansionism by China in the South China Sea. (March 5) AP

“Vietnam has been deeply concerned about China’s pugilistic and aggressive moves in the South China Sea,” said John Kirby, a retired US Navy rear admiral and CNN military and diplomatic analyst.

“They are worried about where China is going, and they have wanted for years now to have a better relationship with the United States.”

Cultural exchanges, including culinary and sporting activities, will take place between some of the US military personnel on board and their Vietnamese counterparts. Some US sailors will also visit a center for victims of Agent Orange, the toxic chemical compound used by the US during the conflict to destroy jungles and forests.

The subject of China, and Chinese activity in the South China Sea, is likely to loom large over the visit.

Since 2014, China has forged ahead with island-building in the disputed waters, despite a landmark ruling in 2016 by the Permanent Court of Arbitration in The Hague, which said there was no legal basis for China’s maritime claims.

High-resolution aerial images of China’s reclamation efforts in the Spratly Islands, recently obtained by the Philippine Inquirer newspaper, show that the reefs and sandbars have been turned into island fortresses, with ports, air strips, lighthouses, hangars and multi-story buildings. Vietnam is among the claimants that has stood up most publicly against China, after the Philippines — long one of most ardent critics of Chinese expansion in the area — reversed course under President Rodrigo Duterte. …..

The United States has long had a robust naval presence in Southeast Asia, in part to ensure the openness of the South China Sea trading routes. Some $5 trillion in goods pass through those waters each year.

“I do not think it’s too late to forestall further militarization, but I think we need to have a comprehensive — and not just a military — strategy for how to deal with this.”

This article published at CNN on March 5.

1. For VIETNAM, give the following information:

2. For VIETNAM:
a) list the who, what, where and when of the news item
b) What is the U.S.’s public reason for deploying the nuclear powered aircraft carrier USS Carl Vinson (and two other naval ships) to Vietnam?
c) What is the more important reason for the visit?

From the CNN article above:

In June 2017, Vietnam refused Chinese demands to cease drilling on Vanguard Bank, an area that belongs to Vietnam under international law. Vietnam had granted a subsidiary of Spanish company Repsol drilling rights to the bank. China claims the area is part of its territory.

Vietnam eventually backed down a month later, under pressure from China. Vietnam has also urged its fellow ASEAN nations to take a stronger stance against China in the South China Sea, though the body has largely chosen not to forcefully challenge Beijing.

“This is obviously a game of balance of power, and China is flexing its muscle in the South China Sea,” said Le Hong Hiep, a fellow at Singapore’s ISEAS Yusof Ishak Institute.”  Other countries will need to do more to counteract China.”

From a USA Today report:

The United States hasn’t taken any official position on South China Sea territorial claims but conducts “freedom of navigation” operations in the waterways by sailing ships without notice through disputed areas. China has condemned the operations and has responded in the past by scrambling fighter jets to monitor the U.S. vessels.

China claims sovereignty over almost all of the South China Sea, where more than $5 trillion of goods are shipped each year through some of the world’s busiest waterways. Vietnam has overlapping claims on some islands in the sea’s Spratly and Paracel chains, and tensions have flared between the two neighbors over these disputes. In 2014, Beijing deployed an oil rig in disputed waters near Vietnam, which led to a standoff between naval vessels and sparked violent anti-China demonstrations in Vietnam.

Historical animosity toward China runs deep in Vietnam, which was occupied by its much larger neighbor for much of the first millennium AD. However, China remains Vietnam’s largest trading partner, and its rising role as the dominant superpower in the region requires a careful balancing act for Vietnam.