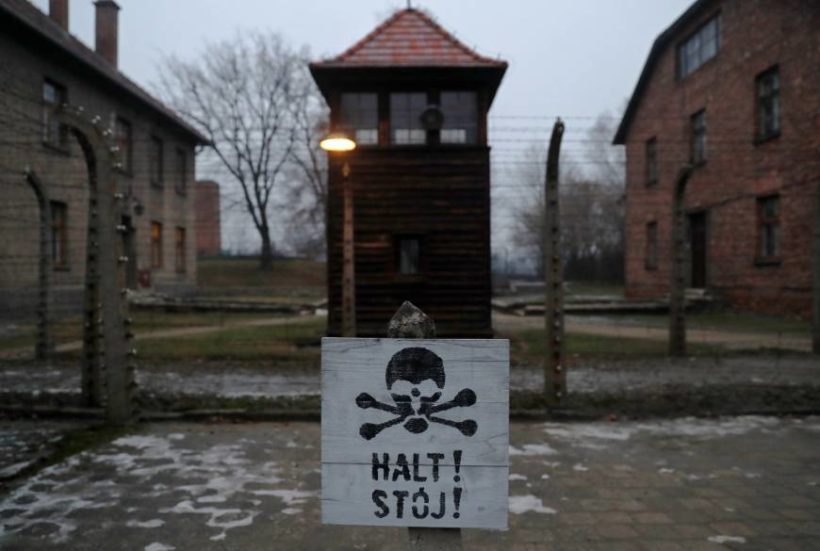 A sign reading 'Stop!' in German and Polish is seen at the former Nazi German concentration and extermination camp Auschwitz, during the ceremonies marking the 73rd anniversary of the liberation of the camp and International Holocaust Victims Remembrance Day, in Oswiecim, Poland on Saturday January 27, 2018. (The Japan Times/Rueters)

(by Will Racke, The Daily Caller, Jan. 29) – Israel and Poland have agreed to diplomatic talks about the controversy surrounding a proposed Polish law that would outlaw blaming Poland for Nazi atrocities committed on its soil during World War II, Israeli Prime Minister Benjamin Netanyahu said Sunday night.

Passed by the lower house of the Polish parliament Friday, the bill would make it illegal to suggest the Polish state or people were responsible for the murder of Jews in the Holocaust. The proposal has not yet become law — it still has to be approved by the Polish senate and President Andrzej Duda — but Israeli officials have denounced it as legal sanction for distorting history.

Israel has “no tolerance for the distortion of the truth, the rewriting of history and the denial of the Holocaust,” Netanyahu said at his weekly cabinet meeting Sunday, according to the Associated Press.

Earlier Sunday, the Israeli Foreign Ministry summoned Poland’s charge d’Affaires Piotr Kozlowski to officially express displeasure with the bill. Prime Minister Netanyahu followed up with a call to Polish Prime Minister Mateusz Morawiecki, during which they agreed hear out Israeli objections to the legislation.

“The two agreed that teams from the two countries would open an immediate dialogue in order to try to reach understandings regarding the legislation,” Netanyahu’s office said in a statement. Before WWII, Poland was home to roughly 3.2 million Jews, the largest Jewish community in Europe. Nazis invaded and occupied Poland in 1939 and eventually built some of their most notorious death camps there, including Auschwitz and Treblinka. [It is a known fact that] some Polish people collaborated with the Nazis and enabled the extermination of Polish Jews.

The Polish government says the proposed “blame” bill is not intended to whitewash history or limit freedom to research or speak about the Holocaust. Rather, the legislation seeks to codify the government’s position that the Polish state and people were also victims of Nazi terror, according to the bill’s sponsors. [The Polish government said in a statement the legislation aimed to stop the Polish people or state from being blamed for Nazi crimes.]

“We will not change any provisions in the bill,” said Beata Mazurek, spokeswoman for the ruling conservative-nationalist Law and Justice party, according to the AP. “We have had enough of Poland and Poles being blamed for German crimes.”

It is already against the law in Poland to deny that the Holocaust happened.

Yad Vashem, Israel’s Holocaust remembrance center, said it is historically inaccurate to describe Auschwitz and other Nazi camps in Poland as “Polish death camps.” But the proposed bill is “liable to blur the historical truths regarding the assistance the Germans received from [some/many of] the Polish population,” the organization said, according to Reuters.

Israeli officials were also angered by the “surprising and unfortunate” timing of the Holocaust bill, which was passed a day before International Holocaust Remembrance Day.

2. For POLAND:
a) list the who, what, where and when of the news item
b) What is the purpose of the agreed to talks between Poland and Israel?
c) What is NOT the intention of the proposed Polish law, according to the government?
d) What is the intended purpose of the law?
e) What is already a law in Poland relating to the Holocaust?
f) Consider Poland’s existing law on the Holocaust. Do you think if passed, this new bill would indeed “blur the historical truths regarding the assistance the Germans received from the Polish population” as Yad Veshem fears, or would it just prevent the Polish people or state being blamed for Nazi crimes, as the Polish government hopes? Explain your answer.
OPTIONAL: Ask a grandparent: Do you think this law is needed? Please explain your answer.

Israeli President Reuven Rivlin, noting that exactly 73 years had passed since the Auschwitz death camp on Polish soil was liberated, cited the words of a former Polish president about how history could not be faked and the truth could not be hidden.

“The Jewish people, the State of Israel, and the entire world must ensure that the Holocaust is recognized for its horrors and atrocities,” Rivlin said. “Also among the Polish people, there were those who aided the Nazis in their crimes. Every crime, every offense, must be condemned. They must be examined and revealed.”

At Auschwitz, however, Polish Prime Minister Mateusz Morawiecki stressed the Poles who helped Jews risking their own lives, noting that some 7,000 had been recognized by Yad Vashem (Israel’s Holocaust Remembrance Center) but suggesting that the Polish sacrifices have not been acknowledged adequately.

“Jews, Poles, and all victims should be guardians of the memory of all who were murdered by German Nazis. Auschwitz-Birkenau is not a Polish name, and Arbeit Macht Frei is not a Polish phrase,” Morawiecki said later on Twitter.

Yad Vashem  issued a statement Saturday night opposing the Polish legislation and trying to put into historical context the “complex truth” regarding the Polish population’s attitude toward its Jews.

“There is no doubt that the term ‘Polish death camps’ is a historical misrepresentation,” the Yad Vashem memorial said. “However, restrictions on statements by scholars and others regarding the Polish people’s direct or indirect complicity with the crimes committed on their land during the Holocaust are a serious distortion.”

From a Reuters report:

For the Holocaust Remembrance Museum in Israel, go to yadvashem.org or visit Yad Vashem’s youtube page