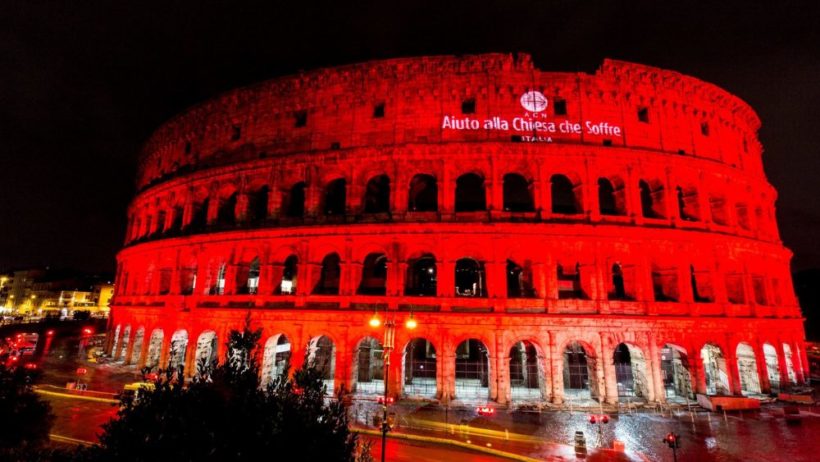 Rome's Colosseum is lit up in red to draw attention to the persecution of Christians around the world in Rome, Italy, February 24, 2018.

(by Philip Pullella, Reuters) – Rome’s ancient Colosseum was bathed in red on Saturday in solidarity with persecuted Christians, particularly Asia Bibi, a woman condemned to death under Pakistan’s blasphemy laws.

Hundreds gathered on a rainy night outside the Roman amphitheatre that is a symbol of the martyrdom of early Christians to hear the husband and daughter of Asia Bibi.

The Catholic woman has been living on death row in Pakistan since 2010, when she was condemned for allegedly making derogatory remarks about Islam after neighbours objected to her drinking water from their glass because she was not Muslim. Human rights groups such as Amnesty International say the blasphemy law is increasingly exploited by religious extremists as well as ordinary Pakistanis to settle personal scores.

“The aim of the blasphemy laws is crush people who believe differently,” Archbishop Nunzio Galantino, secretary-general of the Italian bishops conference, told the gathering.

The law does not define blasphemy and evidence might not be reproduced in court for fear of committing a fresh offense [against Allah]. There are no penalties for false accusations.

Asia Bibi’s case drew international attention after the murder of two Pakistani politicians who tried to intervene on her behalf.

At the Rome gathering, her husband Ashiq Masih said his wife was innocent of blasphemy. “This is just hate against Christians, who are considered [by Muslims to be] impure,” he said. The husband and daughter, who broke down in tears as she addressed the group, were earlier received by Pope Francis, who told her: “I think often of your mother and I pray for her.”

European Parliament president Antonio Tajani, who has been tipped as a possible Italian prime minister after next week’s election, said that persecution of Christians was “a genocide.”

“A message must be sent from this place. It is the duty of Europe to defend these values [of religious liberty] wherever on earth they are trampled on,” said Mr Tajani.

Rebecca Bitrus, a Nigerian Christian woman who was held for two years after she was abducted by Boko Haram Islamist militants, told of how she was repeatedly beaten and raped.

During the event, organized by Catholic group Aid to the Church in Need, there were live link-ups with Aleppo, Syria and Mosul, Iraq, both of whose minority Christian populations have been hit hard by wars. – (Reuters)

1. For PAKISTAN, give the following information:

2. For PAKISTAN:
a) list the who, what, where and when of the news item
b) Blasphemy is defined as: something said or done that is disrespectful to God or to something holy. List the problems with Pakistan’s blasphemy law.
c) How did Asia Bibi’s husband Ashiq Masih explain the charge against her?
d) What effect do you think these gatherings will have on helping persecuted Christians around the world? What is the best way to help them?
e) Christians and Jews believe in and follow God’s 10 commandments. Which commandment found in Exodus 20 of the Old Testament are Asia Bibi’s accusers not following?

Asia Bibi is from Ittan Wali, a rural village in Punjab, eastern Pakistan – about 60 miles west of Lahore. She has five children, and before being arrested in 2009, worked as a farmhand to support her family. Her husband, Ashiq Masih, is a laborer.

An argument broke out between Bibi and a number of Muslim female workers in June 2009. They were working in a field together when the other women refused to drink from a water cup used by Bibi because she was a Christian and therefore deemed “unclean” by Muslims.

The Muslim women had pressured her many times to convert to Islam. During a discussion, Bibi reportedly said: “I believe in my religion and in Jesus Christ, who died on the cross for the sins of mankind. What did your Prophet Muhammad ever do to save mankind?”

Reports vary as to what happened in the immediate aftermath of the incident. Her husband told the New York Times in a 2010 interview that Bibi was immediately accused of blasphemy by her fellow workers. “Suddenly she saw men and women walking towards her with angry gestures,” Masih said. “They started beating her and shouting that she had made derogatory remarks against the Prophet Muhammad.”

Masih said the mob dragged his wife to the local police station where she was charged with blasphemy and jailed.

Campaigners are united in the belief that the charges leveled at Bibi are trumped up, and that she was falsely accused to settle a score.

Judge Muhammed Iqbal sentenced Bibi to death in November 2010. In a memoir written by Bibi and translated into English in 2012, she recalled the moment she was told of her fate: “I cried alone, putting my head in my hands. I can no longer bear the sight of people full of hatred, applauding the killing of a poor farm worker. I no longer see them, but I still hear them, the crowd who gave the judge a standing ovation, saying: ‘Kill her, kill her! Allahu akbar!’  The court house is invaded by a euphoric horde who break down the doors, chanting: ‘Vengeance for the holy prophet. Allah is great!’ I was then thrown like an old rubbish sack into the van… I had lost all humanity in their eyes.”

Is this common in Pakistan?

Sadly, yes. At least 95 per cent of the Pakistani population is Muslim, and Islam is enshrined in the constitution as the state religion. The US Commission for International Religious Freedom last year said the country represented “one of the worst situations in the world for religious freedom” and accused the Pakistani government of failing to provide adequate protections for faiths other than Islam. It argued that repressive blasphemy laws in particular are used to target religious minorities.

These laws prescribe life imprisonment for the desecration of the Qur’an and the death sentence for “defiling” the Prophet Mohammad, and accusations of incidents have often prompted mob violence. More than 40 people are currently on death row for blasphemy, the majority of whom are members of religious minorities.

Bibi, however, is the first woman to be sentenced to death in Pakistan on blasphemy charges.

What has the reaction been in Pakistan?

Muslim hardliners have celebrated Bibi’s conviction. The imam at the mosque in Bibi’s village told the BBC that he cried with joy when she was sentenced to death, and pledged that even in the case of her being released on appeal, she would be punished. “If the law punishes someone for blasphemy, and that person is pardoned, then we will also take the law in our hands,” Qari Mohammed Salim said.

A Muslim cleric has offered 500,000 rupees – about £4,000 – to anyone who manages to kill her, and she has reportedly been put into solitary confinement in her prison in Multan, eastern Pakistan, over fears she may be attacked by vigilantes.

There are real concerns that even if Bibi is set free on appeal, she will be targeted by vigilantes who want her to pay for her alleged crime. “One of the reasons there is a mentality of impunity is simply because the existing laws give open license for [Islamists] in Pakistan to act without fear, and to taken the law into their own hands,” the source said. “Oftentimes, even if someone is released, that the person will receive the brunt of fundamentalists outside the court.

“Even if Asia Bibi is released, there will definitely be outrage on the streets,” he added. (from a 2016 Christianity Today article)

Muslim persecution of Christians around the world:

Furthermore, any Muslim person—including any person born to a Muslim family or any person who became a Muslim at a given point in his or her life—who converts to Christianity or re-converts to it, is considered an apostate. Apostasy, the conscious abandonment of Islam by a Muslim in word or deed, including conversion to Christianity, is punishable as a crime under applications of the Sharia (countries in the graph). There are, however, cases in which a Muslim will adopt the Christian faith, secretly without declaring his/her apostasy. As a result, they are practicing Christians, but they are still legally Muslims, and they can face the death penalty according to the Sharia. Meriam Ibrahim, a Sudanese woman, was sentenced to death for apostasy in 2014, because the government of Sudan classified her as a Muslim, even though she was raised as a Christian.

According to a report by the international catholic charity organisation Aid to the Church in Need, the religiously motivated ethnic cleansing of Christians is so severe that they are set to disappear completely from parts of the Middle-East within a decade. (from wikipedia)

Read more about Asia Bibi and other persecuted Christians at allstandtogether.com

Visit the website for the group that organized the event to bring attention to persecuted Christians: Aid to the Church in Need