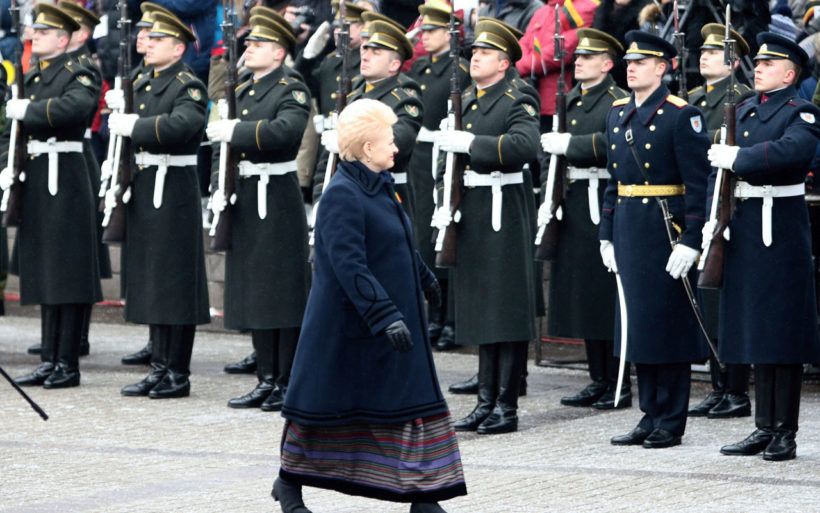 Lithuanian President Dalia Grybauskaite reviews troops during a ceremony marking 100 years since Lithuania regained independence after World War I, on February 16, 2018 at the presidential Palace in Vilnius. European leaders gather in Vilnius to celebrate the anniversary, as tensions flare with neighbouring Russia. (Photo: AFP/Stringer)

Hugh Morris, at UK Daily Telegraph wrote:  Lithuania is celebrating 100 years of independence. Sort of. While it shook off more than a century of Tsarist (Russian) rule on February 16, 1918, it was reoccupied at the end of the Second World War and only regained its freedom in 1990. Nevertheless, the country is marking the centenary, as is sure to be hoping the next 100 years is rather less fraught.

Church bells tolled across Lithuania on Friday to mark 100 years of independence regained after World War I by the Baltic nation, which is now firmly anchored in the West but experiencing tension with powerful neighbor Russia.

“At the start of the last century, we looked forward with great hope to any sign of support,” President Dalia Grybauskaite said at a ceremony in the snowy capital Vilnius. “Today we know that we have true friends and allies, and their strong supportive shoulder,” she added, speaking alongside top European Union (EU) officials, presidents and royalty.

To demonstrate collective defense commitments, US and Danish fighter jets deployed in Lithuania roared across the capital’s cloudy skies on Friday.

“Although changes in government have been frequent, and political parties come and go, election results have never been challenged,” he told AFP.

Lithuania can also boast solid economic growth of 3.9 percent last year, though it is beset by daily concerns over rising prices, social inequality and emigration to the richer west. Hours earlier, schoolchildren marched across downtown to honour the 20 Lithuanian men who signed the declaration of independence on February 16, 1918.

A hundred bonfires were lit along the central pedestrian avenue later in the day, followed by concerts and fireworks in most cities and towns.

1. For LITHUANIA, give the following information:

2. For LITHUANIA:
a) list the who, what, where and when of the news item
b) What are the Baltic states?
c) During what years did Russia control Lithuania?
d) List the world leaders who attended the celebration.
e) How did the U.S. and Denmark show support for Lithuania’s independence?
f) In addition to the ceremony with world leaders, list some of the ways the 100 year anniversary was marked in Lithuania.

Optional:  Lithuania is one of the three Baltic states that Russia controlled. “The Singing Revolution” is an inspiring must-see documentary on the independence of one of the other Baltics – Estonia.  Check it out of your library, or visit the website for a movie trailer:  singingrevolution.com

Lithuanian lands were united under MINDAUGAS in 1236; over the next century, through alliances and conquest, Lithuania extended its territory to include most of present-day Belarus and Ukraine. By the end of the 14th century Lithuania was the largest state in Europe. An alliance with Poland in 1386 led the two countries into a union through the person of a common ruler. In 1569, Lithuania and Poland formally united into a single dual state… This entity survived until 1795 when its remnants were partitioned by surrounding countries. Lithuania regained its independence following World War I but was annexed by the USSR in 1940 – an action never recognized by the US and many other countries. On 11 March 1990, Lithuania became the first of the Soviet republics to declare its independence, but Moscow did not recognize this proclamation until September of 1991 (following the abortive coup in Moscow). The last Russian troops withdrew in 1993. Lithuania subsequently restructured its economy for integration into Western European institutions; it joined both NATO and the EU in the spring of 2004. In 2015, Lithuania joined the euro zone. (from the CIA World FactBook)