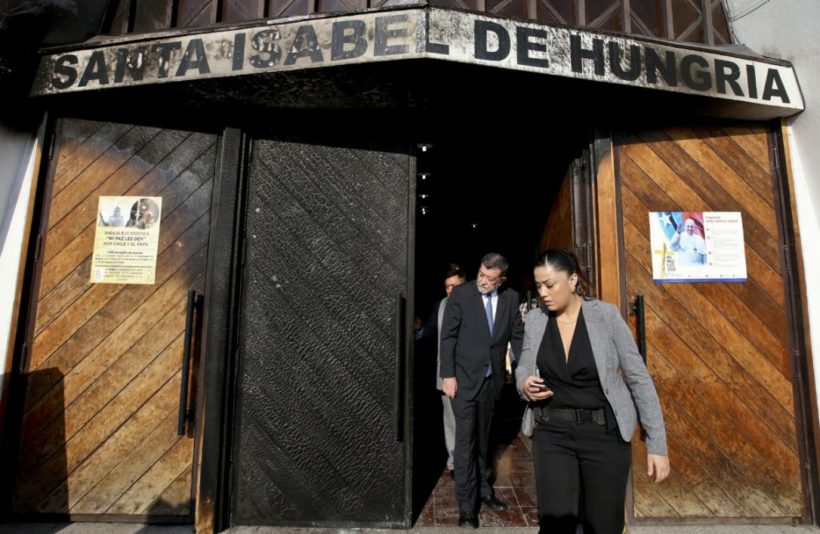 Notes left at the scene warned that “Pope Francis, the next bomb will be in your robe,” and indicated members of the Mapuche indigenous group were responsible.

The Mapuche originate about seven hours south of the capital city, where radical members have burned down 27 Catholic and evangelical churches in the past three years.

Responsibility for the attacks is claimed by an extremist group called Weichan Auka Mapu. It leaves behind messages with demands, such as the release of Mapuche prisoners or the return of Mapuche land which it says was taken by the Chilean government in the 19th century.

A high percentage of Mapuches now identify as Christian: 55 percent are Catholic, and 32 percent are Protestant. But for others, Christians are still seen as invaders complicit* in the government’s actions. [*complicit is: involved in wrongdoing]

Of the 20 churches burned down between 2015 and 2016, 12 were Catholic and 8 were Protestant. In 2017, a further 7 have been torched. These churches also served as schools, meeting places, and shelters for those fleeing natural disasters. Many belonged to the poorest sectors of the poorest region in Chile, and were attended by Mapuches themselves.

The leader of an Assemblies of God church burned down in July recalled the moment his attractive wooden church—built 15 years ago using money raised by church members—was reduced to ashes.

Juan Mella, who is also head of the local pastors’ council, said the event demonstrated an intolerance among the Mapuches.

“Each human being can have their own views with regard to faith, spirituality,” he said. “We have never imposed our faith, but we have shared it with everyone because the Lord sent us to every nation, every tribe.”

Abelino Apeleo, an Anglican bishop in Araucanía and also an ethnic Mapuche, said the primary issue is ignorance on the part of some of his fellow Mapuches.

“One sector of the Mapuche people—those with a more radical, violent attitude—blame the church for creating the problems of the Mapuches,” he said. “This is totally wrong. And of course we cannot support violence as a response.”

The incident that has received the most publicity took place in June 2016, when masked men invaded a Sunday service at La Iglesia del Señor in Padre Las Casas, a city just south of the regional capital, Temuco. The incident became known as the “Case of the Burned Church,” and is the only one so far that has led to arrests.

A woman from the church, speaking anonymously, explained what happened that day.

“I was inside with my children, my husband, my brother-in-law, and my brothers,” she recalled. The vandals “broke the windows and entered, firing their guns into the air, and then they threw us out. Then they came after us with large guns, machine guns, and they were wearing masks. They told us to leave or they would set us on fire as well—the children and all.”

The note the attackers left behind on that occasion read: “Christianity: accomplice of the repression of the Mapuche people.”

…The attacks have continued despite police efforts to find [the] perpetrators. In fact, after four more churches were burned down on September 20, many other congregations also received threats, forcing the police to station guards outside two Protestant churches in the region.

“It isn’t only the attacks on the churches, it’s the pamphlets they leave behind, on which they write their demands and also provide a context for their behavior,” said Luis Torres, in charge of the prosecution of the four men.

However, Pamela Nahuelcheo, acting for the defense, has called into question the evidence against her clients.

“It has been reported that the defendants were found at the place where the fire took place and were detained on the spot,” she said. “But that isn’t true. They were actually arrested two and a half hours after the fire, seven kilometers away from the church. One of the police officers said they smelt strongly of petrol and this is why they were detained. But there have been complaints about the actions of the police officers, that they fired shots at my defendants and beat them. And that the backpack supposedly found on them was not theirs at all.”

In this context and faced with overwhelming pressure—including by the defendants, who had undertaken a four-month hunger strike—the government in October said the charges against the men should be changed to arson instead of terrorism.

There have been two further hearings since then.

“It can’t be normal to attack people attending a church service,” Torres said. “Children are attacked and thrown out of the church. They shoot at them to make them leave, and then the church is set on fire. If they didn’t do it and weren’t running away, why were their clothes wet? Why were some of their clothes torn? Why did they have evidence on them that links them directly to the attack?”

Local pastors continue to hope the situation will be resolved.

“We know that God protects us,” Mella said. “And though our church was burned, we will rebuild it. And anyway, Jesus said, ‘Do not be afraid of those who kill the body but cannot kill the soul.’”

Bishop Apeleo added, “We will continue to bear witness to the gospel. We have to apply the teachings of Jesus: to forgive, to have mercy, and to love our enemies. At some point they may need our help, and we will be there for them.”

The Pastors’ Council of Araucanía released a statement, bemoaning the decision to change the charges against the men. Violence can never be justified, it said, “whether by state or non-state actors.”

The Council demanded that the government “take charge of the very serious situation … [which] led to a service being stopped, preventing 15 people—mostly women and children—from continuing with their meeting. They were driven out violently from their own church, and then forced to watch as their place of worship was burned down in front of them.

“It is the responsibility of the state to ensure that events such as these don’t happen again, by ensuring that those responsible are brought to justice, as well as protecting the victims and ensuring their church is rebuilt.”

(Published on January 12 at Christianity Today)

2. For CHILE:
a) list the who, what, where and when of the news item
b) Who were the vandals?
c) Why is this extremist group of Mapuches destroying Christian churches?
d) How many churches have been destroyed/burned down by people who say they are Mapuches?
e) Illogical is: lacking sense or clear, sound reasoning. What is illogical about this?