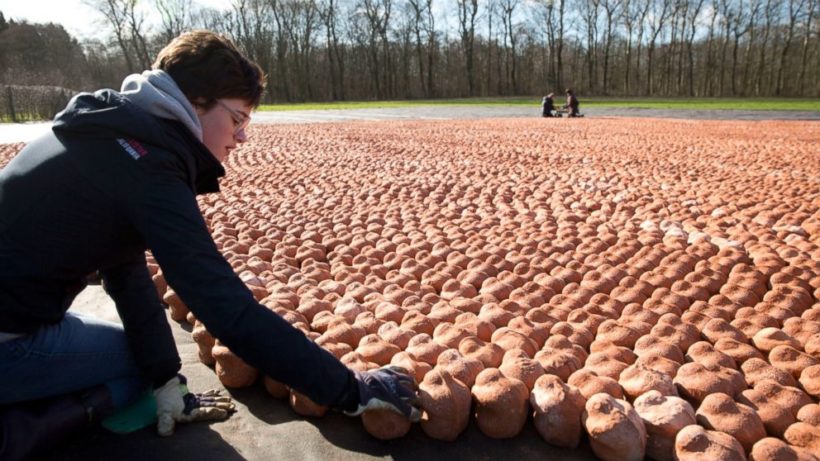 YPRES, Belgium (AP) — A special remembrance installation of 600,000 crouching clay figures is opening to the public soon in Ypres, Belgium, seeking to help visitors from around the world reflect on what happened during World War I a century ago.

Belgium will honor its civilian and military dead with the figures, each about the size of a large fist. The figures have already begun to fill a no-man’s-land between what was once a German and British trench.

Since 2014 [which marked the 100 year anniversary of the beginning of WWI], students, tourists, and others have been creating the pieces in mobile workshops around the world and in the city of Ypres, Belgium, the site of much carnage during the war. Each individual piece comes complete with a dog tag which includes the name of the casualty and the name of the artist who created the piece. In a sense, it connects the past with the present.

“Making these pieces is a good way to remember the soldiers who fought in the war. It wasn’t very pleasant for them,” said 12-year-old Bethany Kibutu, a student at the clay workshop in Ypres who lives in Sheffield, England. “I know it had to happen, but if we can learn from our mistakes the world could maybe be a better place.” The installation opens on March 30. Belgian rain and mud will weather the figures for eight months before they are finally removed in November [2018, which marks the 100 year anniversary of the end of WWI] and given away.

The last two surviving World War I soldiers who knew the horror first hand — Frank Buckles from the United States and Claude Choules from the UK — both died in 2011.

The last year of the Centenary commemorations is wrapping up in November. When that’s over, current and future generations have to find a way to try to keep remembering beyond the Nov. 11 Armistice day.

“Just the creation of these pieces has already brought people together,” said Lotte Moeyaert, co-director of the project. “We’ve had individuals, families, teambuilding groups and students all coming in to create the figures in the workshop.”

“Getting their hands in the clay has made many of them believe they are part of a bigger thing,” she said.

From a March 17, 2018 Associated Press story. Reprinted here for educational purposes. May not be reprinted without permission. Dog tags lay on a table at the Coming World Remember Me workshop in Ypres, Belgium on Monday, Feb. 12, 2018. The dog tags will be placed on the clay figures. (AP Photo/Virginia Mayo)

1. For BELGIUM, give the following information:

2. For BELGIUM:
a) list the who, what, where and when of the news item
b) What is the purpose of the clay figure exhibit?
c) What will be placed on each clay figure?
CHALLENGE: What do you know about WWI? Which countries fought on each side? How did it start? How long did it last? (dates). When/why did the U.S. get involved? What is the significance of Flanders Fields? When/how did it end? …

Approximately 600,000 soldiers and civilians died or were fatally wounded in and around Ieper, Belgium during WWI – between 1914 and 1918. Each and every one of them is recorded in The Name List. This list is the central pillar of Gone West, the Province of West Flanders’ cultural remembrance programme for the commemoration of the 100th anniversary of the First World War.

Each of these names will be given its own small statue as part of the land art installation ComingWorldRememberMe, a creation by Koen Vanmechelen and vzw Kunst, which will be set up in a former part of no-man’s-land in 2018. (from the Flanders Field Museum website)

During the First World War, Ypres (or “Wipers” as it was commonly known as by the British Troops) was the centre of the Battles of Ypres between German and Allied forces.

Ypres occupied a strategic position during the First World War because it stood in the path of Germany’s planned sweep across the rest of Belgium and into France from the north (the Schlieffen Plan). The neutrality of Belgium was guaranteed by Britain; Germany’s invasion of Belgium brought the British Empire into the war. The German army surrounded the city on three sides, bombarding it throughout much of the war. To counterattack, British, French, and allied forces made costly advances from the Ypres Salient into the German lines on the surrounding hills. (from wikipedia)