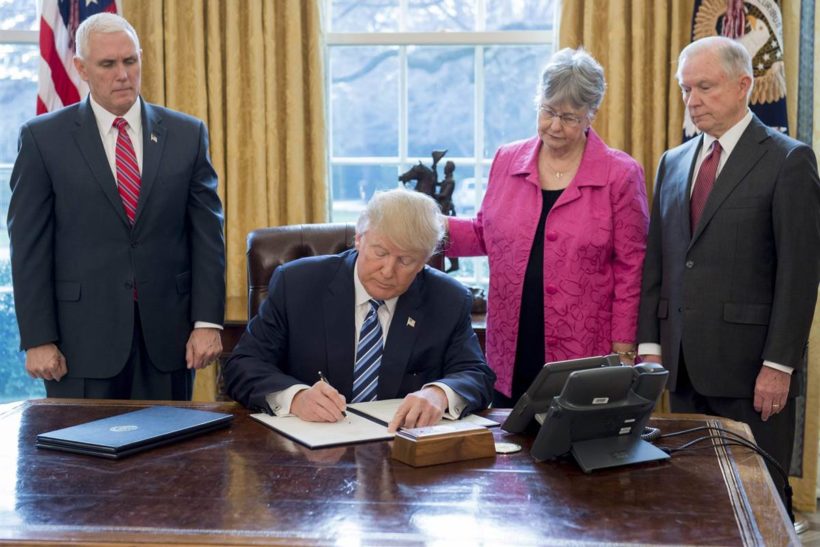 (Compiled from news reports by Newsy at AOL, CNN and the Baltimore Sun) – Taking his first steps on an issue that played prominently in his campaign, President Trump on Thursday signed three executive orders he said are “designed to restore safety in America.”

The President signed the orders in the Oval Office shortly after his Attorney General, former Alabama Sen. Jeff Sessions, was sworn into the nation’s top law enforcement job.

The order also instructs an existing inter-agency working group to submit a report to Trump within four months detailing the progress made in combating criminal organizations, “along with any recommended actions for dismantling them.”

In the announcement, Trump said:

“I’m directing Department of Justice and the Department of Homeland Security to undertake all necessary and lawful action to break the back of the criminal cartels that have spread across our nation and are destroying the blood of our youth and other people.”

The second order creates a task force aimed at reducing crime and improving public safety. It directs Sessions to establish a new Task Force on Crime Reduction and Public Safety.

The Task Force will develop “strategies to reduce crime, including, in particular, illegal immigration, drug trafficking and violent crime,” propose new legislation, and submit at least one report to the President within the next year.

“It’s a shame what’s been happening to our great, truly great law enforcement officers,” Trump said at the signing ceremony. “That’s going to stop as of today.”

The three executive orders also come just one day after Trump held what the administration calls a listening session with county sheriffs from around the nation.

During his presidential campaign, Trump pledged to do more to support law enforcement.

Compiled from news reports by Newsy at AOL, CNN and the Baltimore Sun.  Reprinted here for educational purposes only. May not be reproduced on other websites without permission.

1. What is the purpose of the three executive orders President Trump signed on Thursday?

2. Describe the purpose of each individual order.

3. What does Trump’s first order require an existing inter-agency working group to do?

4. Who has the President directed to establish a Task Force on Crime Reduction and Public Safety?

5. What does he require the Task Force to do?

6. President Trump’s third executive order signed on Thursday calls on the Department of Justice to examine current federal laws that apply to crimes against law enforcement officials. What did he say about this order and U.S. law enforcement?

CHALLENGE QUESTION:
Read the text of any (or all 3) of President Trump’s executive order(s) issued on February 9, 2017:

For all of the President’s exeuctive orders, go to whitehouse.gov.