(by Mary Pemberton, KOMONews.com) ANCHORAGE, Alaska (AP) – The trans-Alaska pipeline remained shut down Sunday more than 24 hours after a leak was discovered at a North Slope pump station. 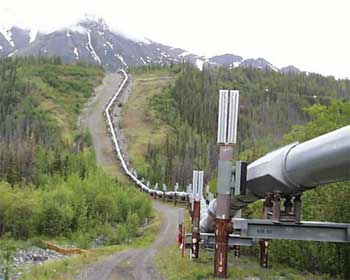 Alyeska Pipeline Service Co. said the leak, which was discovered Saturday at 8:15 a.m., is coming from a section of below-ground piping encased in concrete next to Pump Station 1 – the first pump station on the 800-mile pipeline (see photo at right of an above-ground portion of the pipeline).

The pump station at Prudhoe Bay takes in all the crude from North Slope oil fields before it is delivered to the main line and goes down the trans-Alaska pipeline to Valdez, where it is loaded onto tankers for delivery to the West Coast.

Alyeska Pipeline spokeswoman Michelle Egan said the leaked oil from the pipe went into the basement of the pump station. Work began Saturday afternoon and by noon Sunday about 90 percent had been removed. Some work remains, she said, for example cleaning up the walls. From nine to 10 barrels of oil was spilled, she said.

“We have the leak contained,” she said.

In the meantime, North Slope production has been cut to 5 percent of normal.

Tom DeRuyter, the on-scene coordinator for the Alaska Department of Environmental Conservation, said four responders were working on the spill.

The focus now is to get the pipeline operating again as quickly as possible, Egan said.

Alyeska Pipeline was looking at several scenarios, including bypassing the leak with temporary piping, Egan said. That’s because the area where the leak occurred is complex, and also is underground and encased in concrete and not easily accessible.

Egan did not know how quickly the pipeline could be put back into operation.

In the meantime, Alyeska Pipeline will be watching for any problems associated with low-flow in the pipeline, such as icing in the line. Ice in the line could interfere with machinery when the pipeline is returned to normal, causing another shutdown.

“We don’t like to shut down in winter unexpectedly,” Egan said. “We have to watch that very carefully.”

Associated Press.  Reprinted here for educational purposes only. May not be reproduced on other websites without permission from KOMO News. Visit the website at komonews.com.

2. What does the Alyeska Pipeline Service Company do?

3. Why has the trans-Alaska pipeline been shut down for almost 3 days?

4. How much oil was spilled before the leak was contained?

5. To get the pipeline operating again, Alyeska Pipeline is considering bypassing the leak with temporary piping. Why are they considering this option?

6. Why doesn’t the Alyeska Pipeline Co. like to shut down the pipeline in the winter?

A map of the Trans Alaska Pipleline System (TAPS) and pump station locations: 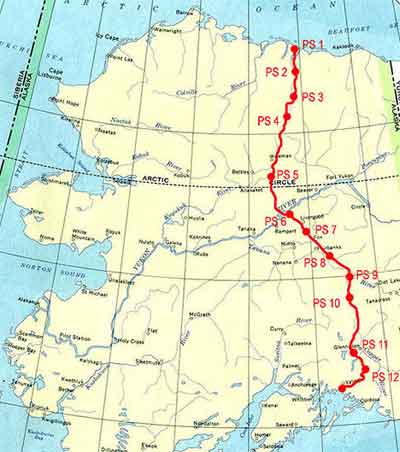 Visit tapseis.anl.gov/guide/index.cfm for information on what TAPS is and how it works, how it was planned and built, where it is located, what it looks like, and how it is managed and regulated.

Read about the Trans-Alaska Pipeline System (TAPS) at:

Watch a video of the pipeline from Alaska’s travel website alaska.org: