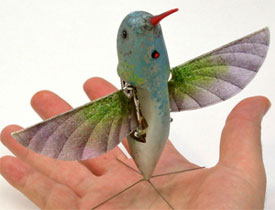 The Pentagon has poured millions of dollars into the development of tiny drones [see photo] inspired by biology, each equipped with video and audio equipment that can record sights and sounds.

They could be used to spy, but also to locate people inside earthquake-crumpled buildings and detect hazardous chemical leaks.

The smaller, the better.

Besides the hummingbird, engineers in the growing unmanned aircraft industry are working on drones that look like insects and the helicopter-like maple leaf seed.

Researchers are even exploring ways to implant surveillance and other equipment into an insect as it is undergoing metamorphosis. They want to be able to control the creature.

The devices could end up being used by police officers and firefighters.

Their potential use outside of battle zones, however, is raising questions about privacy and the dangers of the winged creatures buzzing around in the same skies as aircraft.

For now, most of these devices are just inspiring awe.

With a 6.5-inch wing span, the remote-controlled bird weighs less than a AA battery and can fly at speeds of up to 11 mph, propelled only by the flapping of its two wings. A tiny video camera sits in its belly.

The bird can climb and descend vertically, fly sideways, forward and backward. It can rotate clockwise and counterclockwise.

Most of all it can hover and perch on a window ledge while it gathers intelligence, unbeknownst to the enemy.

“We were almost laughing out of being scared because we had signed up to do this,” said Matt Keennon, senior project engineer of California’s AeroVironment, which built the hummingbird.

The Pentagon asked them to develop a pocket-sized aircraft for surveillance and reconnaissance that mimicked biology. It could be anything, they said, from a dragonfly to a hummingbird.

Five years and $4 million later, the company has developed what it calls the world’s first hummingbird spy plane.

“It was very daunting up front and remained that way for quite some time into the project,” he said, after the drone blew by his head and landed on his hand during a media demonstration.

The toughest challenges were building a tiny vehicle that can fly for a prolonged period and be controlled or control itself.

AeroVironment has a history of developing such aircraft.

Over the decades, the Monrovia, Calif.-based company has developed everything from a flying mechanical reptile to a hydrogen-powered plane capable of flying in the stratosphere and surveying an area larger than Afghanistan at one glance.

It has become a leader in the hand-launched drone industry.

Troops fling a four-pound plane, called the Raven, into the air. They have come to rely on the real-time video it sends back, using it to locate roadside bombs or get a glimpse of what is happening over the next hill or around a corner.

The success of the hummingbird drone, however, “paves the way for a new generation of aircraft with the agility and appearance of small birds,” said Todd Hylton of the Pentagon’s research arm, Defense Advanced Research Projects Agency [DARPA].

These drones are not just birds.

On the far end of the research spectrum, DARPA is also exploring the possibility of implanting live insects during metamorphosis with video cameras or sensors and controlling them by applying electrical stimulation to their wings.

The idea is for the military to be able to send in a swarm of bugs loaded with spy gear.

The military is also eyeing other uses.

The drones could be sent in to search buildings in urban combat zones. Police are interested in using them, among other things, to detect a hazardous chemical leak. Firefighters could fling them out over a disaster to get better data, quickly.

It is hard to tell what, if anything, will make it out of the lab, but their emergence presents challenges and not just with physics.

What are the legal implications, especially with interest among police in using tiny drones for surveillance, and their potential to invade people’s privacy, asks Peter W. Singer, author of the book, “Wired for War” about robotic warfare.

Singer said these questions will be increasingly discussed as robotics become a greater part of everyday life.

“It’s the equivalent to the advent of the printing press, the computer, gun powder,” he said. “It’s that scale of change.”

©2011 The Associated Press. All rights reserved. This material may not be published, broadcast, rewritten or redistributed.  Reprinted here for educational purposes only. Visit the website at associatedpress.org.

1. What are the newly created hummingbird drones capable of doing?

2. For what purposes can the hummingbird drones be used?

3. a) In addition to the military, who might make use of these tiny drones?
b) What concerns have been expressed about the civilian use of the drones?

4. a) Why did AeroVironment embark on the project of making these small drones?
b) How long did it take and how much did it cost to develop the hummingbird drones?

5. How will the success of the hummingbird drone help the military, according to Todd Hylton of the Pentagon’s research arm, Defense Advanced Research Projects Agency (DARPA)?

From the AeroVironment website avinc.com on the Hummingbird Drone:

The final concept demonstrator is called the ‘Nano Hummingbird’ and is capable of doing the following by remote control:

During the demonstration the Nano Hummingbird flew in and out of a building through a normal-size doorway.

The technical goals for the Phase II effort were set out by DARPA as flight test milestones for the aircraft to achieve by the end of the contract effort. The Nano Hummingbird met all, and exceeded many, of the milestones:

1. Demonstrate precision hover flight within a virtual two-meter diameter sphere for one minute.
2. Demonstrate hover stability in a wind gust flight which required the aircraft to hover and tolerate a two-meter per second (five miles per hour) wind gust from the side, without drifting downwind more than one meter.
3. Demonstrate a continuous hover endurance of eight minutes with no external power source.
4. Fly and demonstrate controlled, transition flight from hover to 11 miles per hour fast forward flight and back to hover flight.
5. Demonstrate flying from outdoors to indoors, and back outdoors through a normal-size doorway.
6. Demonstrate flying indoors ‘heads-down’ where the pilot operates the aircraft only looking at the live video image stream from the aircraft, without looking at or hearing the aircraft directly.
7. Fly the aircraft in hover and fast forward flight with bird-shaped body and bird-shaped wings.

Visit AeroVironment’s website (creator of the hummingbird drone) at avinc.com.