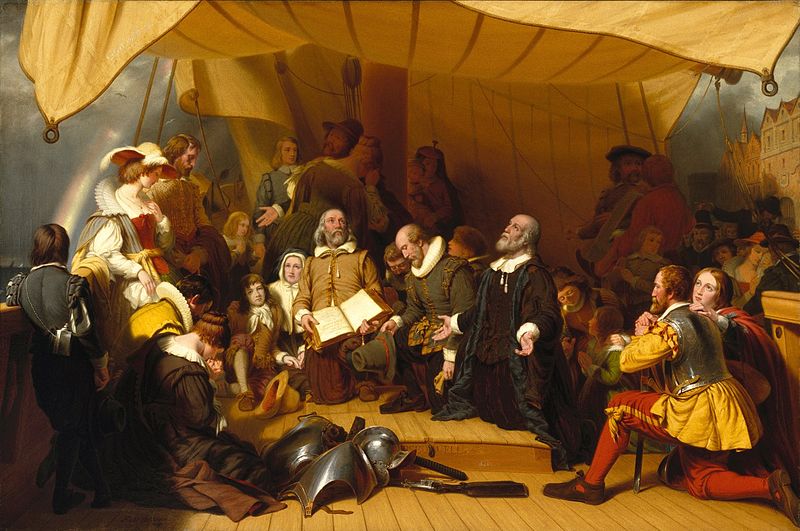 “Embarkation of the Pilgrims” (by Robert W. Weir) This painting depicts the Pilgrims on the deck of the Speedwell before they departed from Holland. After leaks forced the Speedwell to make additional stops in Dartmouth and then Plymouth, its passengers boarded the Mayflower. The figures at the center of the painting are William Brewster, holding the Bible; Governor Carver, kneeling with head bowed and hat in hand; and pastor John Robinson, with extended arms, looking Heavenward.

The celebration we now popularly regard as the “First Thanksgiving” was the Pilgrims’ three-day feast celebrated in early November of 1621 (although a day of thanks in America was observed in Virginia at Cape Henry in 1607). The first Thanksgiving to God in Plymouth Colony was actually celebrated during the summer of 1623, when the colonists declared a Thanksgiving holiday after their crops were saved by much-needed rainfall. Upon landing in America [in December 1620], the Pilgrims conducted a prayer service, then quickly turned to building shelters. Starvation and sickness during the ensuing New England winter killed almost half their population [of 102 people], but through prayer and hard work, with the assistance of their Indian friends, the Pilgrims reaped a rich harvest in the summer of 1621. “The First Thanksgiving” (Painting by Jennie A. Brownscombe, 1914)

Most of what we know about the Pilgrim Thanksgiving of 1621 comes from original accounts of the young colony’s leaders, Governor William Bradford and Master Edward Winslow, in their own hand: “They begane now to gather in ye small harvest they had, and to fitte up their houses and dwellings against winter, being well recovered in health & strenght, and had all things in good plenty; for some were thus imployed in affairs abroad, others were excersised in fishing, aboute codd, & bass, & other fish, of which yey tooke good store, of which every family had their portion. All ye somer ther was no wante. And now begane to come in store of foule, as winter aproached, of which this place did abound when they came first (but afterward decreased by degree). And besids water foule, ther was great store of wild Turkies, of which they took many, besids venison, &c. Besids they had aboute a peck a meale a weeke to a person, or now since harvest, Indean corne to yt proportion. Which made many afterwards write so largly of their plenty hear to their freinds in England, which were not fained, but true reports.”
W.B. (William Bradford)

“Our Corne did proue well, & God be praysed, we had a good increase of Indian Corne, and our Barly indifferent good, but our Pease not worth the gathering, for we feared they were too late sowne, they came vp very well, and blossomed, but the Sunne parched them in the blossome; our harvest being gotten in, our Governour sent foure men on fowling, that so we might after a more speciall manner reioyce together, after we had gathered the fruit of our labors; they foure in one day killed as much fowle, as with a little helpe beside, served the Company almost a weeke, at which time amongst other Recreations, we exercised our Armes, many of the Indians coming amongst vs, and among the rest their greatest King Massasoyt, with some nintie men, whom for three dayes we entertained and feasted, and they went out and killed fiue Deere, which they brought to the Plantation and bestowed upon our Governour, and upon the Captaine, and others. And although it be not alwayes so plentifull, as it was at this time with vs, yet by the goodneses of God, we are so farre from want, that we often wish you partakers of our plenty.” E.W. (Edward Winslow) Plymouth, in New England, this 11th of December, 1621

[NOTE: These are the only two primary sources for the events of autumn 1621 in Plymouth: Edward Winslow writing in Mourt’s Relation and William Bradford writing in Of Plymouth Plantation.]

The feast included foods suitable for a head table of honored guests, such as the chief men of the colony and Native leaders including Massasoit (“Great Leader” also known as Ousamequin “Yellow Feather”), who was the sachem (chief) of Pokanoket (Pokanoket is the area at the head of Narragansett Bay). Venison, wild fowl, turkeys and Indian corn were the staples of the meal, which likely also included other food items known to have been aboard the Mayflower or available in Plymouth, such as spices, Dutch cheese, wild grapes, lobster, cod, native melons, pumpkin (pompion) and rabbit.

By the mid-17th century, the custom of autumnal Thanksgivings was established throughout New England. Observance of Thanksgiving Festivals began to spread southward during the American Revolution, as the newly established Congress officially recognized the need to celebrate this holy day.

The first Thanksgiving Proclamation was issued by the revolutionary Continental Congress on November 1, 1777. Authored by Samuel Adams, it was one sentence of 360 words, which read in part:

“Forasmuch as it is the indispensable duty of all men to adore the superintending providence of Almighty God; to acknowledge with gratitude their obligation to him for benefits received…together with penitent confession of their sins, whereby they had forfeited every favor; and their humble and earnest supplications that it may please God through the merits of Jesus Christ, mercifully to forgive and blot them out of remembrance…it is therefore recommended…to set apart Thursday the eighteenth day of December next, for solemn thanksgiving and praise, that with one heart and one voice the good people may express the grateful feeling of their hearts and consecrate themselves to the service of their Divine Benefactor…acknowledging with gratitude their obligations to Him for benefits received….To prosper the means of religion, for the promotion and enlargement of that kingdom which consisteth ‘in righteousness, peace and joy in the Holy Ghost’.”

In 1789 our Founding Fathers officially recognized the day by proclamation of the Constitutional government.  Soon after adopting the Bill of Rights, a motion in Congress to initiate the proclamation of a national day of thanksgiving was approved.

This resolution was delivered to President George Washington, who readily agreed with its suggestion and put forth the following proclamation by his signature: Whereas it is the duty of all nations to acknowledge the providence of Almighty God, to obey His will, to be grateful for His benefits, and humbly to implore His protection and favor; and

Whereas both Houses of Congress have, by their joint committee, requested me “to recommend to the people of the United States a day of public thanksgiving and prayer, to be observed by acknowledging with grateful hearts the many and signal favors of Almighty God, especially by affording them an opportunity peaceably to establish a form of government for their safety and happiness”:

Now, therefore, I do recommend and assign Thursday, the 26th day of November next, to be devoted by the people of these States to the service of that great and glorious Being who is the Beneficent Author of all the good that was, that is, or that will be; that we may then all unite in rendering unto Him our sincere and humble thanks for His kind care and protection of the people of this country previous to their becoming a nation; for the signal and manifold mercies and the favorable interpositions of His providence in the course and conclusion of the late war; for the great degree of tranquility, union, and plenty which we have since enjoyed; for the peaceable and rational manner in which we have been enabled to establish constitutions of government for our safety and happiness, and particularly the national one now lately instituted; for the civil and religious liberty with which we are blessed, and the means we have of acquiring and diffusing useful knowledge; and, in general, for all the great and various favors which He has been pleased to confer upon us.

And also that we may then unite in most humbly offering our prayers and supplication to the great Lord and Ruler of Nations, and beseech Him to pardon our national and other transgressions; to enable us all, whether in public or private stations, to perform our several and relative duties properly and punctually; to render our national government a blessing to all the people by constantly being a government of wise, just and constitutional laws, discreetly and faithfully executed and obeyed; to protect and guide all sovereigns and nations (especially such as have shown kindness to us), and to bless them with good governments, peace, and concord; to promote the knowledge and practice of true religion and virtue, and the increase of science among them and us; and, generally, to grant unto all mankind such a degree of temporal prosperity as He alone knows to be best. Given under my hand, at the city of New York, the 3d day of October, AD 1789 George Washington

Lincoln’s Proclamation was passed by an Act of Congress, and a proclamation was repeated for the following 75 years by every subsequent president. The humble, grateful spirit attendant to those celebrations was expressed in such statements as this by Theodore Roosevelt:

“No people on earth have more cause to be thankful than ours, and this is said reverently, in no spirit of boastfulness in our own strength, but with the gratitude to the Giver of good who has blessed us.”

In 1939, President Franklin D. Roosevelt moved Thanksgiving Day up one week earlier than had been tradition, to appease merchants who wanted more time to feed the growing pre-Christmas consumer frenzy. Folding to congressional pressure two years later, Roosevelt signed a resolution returning Thanksgiving to the fourth Thursday of November, as Congress in 1941 permanently set the fourth Thursday of each November as our national day of Thanksgiving.  (from apuritansmind.com)

1. To whom did Edward Winslow give credit for the good crops the Pilgrims reaped in 1621?

2. What was the purpose of George Washington’s Thanksgiving proclamation?

4. Make a list of what you are thankful for this year. Spend some time thinking about it. How does your list differ from what the Pilgrims, and Presidents Washington and Lincoln were thankful to God for?

THE MAYFLOWER COMPACT:  The Mayflower Compact was drawn up on the Mayflower on November 11, 1620, before the Pilgrims left the ship, under these circumstances as described by Gov. William Bradford:

“This day, before we came to harbour, observing some not well affected to unity and concord, but gave some appearance of faction, it was thought good there should be an association and agreement, that we should combine together in one body, and to submit to such government and governors as we should by common consent agree to make and choose, and set our hands to this that follows, word for word…”

The original text of the Mayflower Compact is as follows:

In the name of God, Amen. We whose names are under-written, the loyal subjects of our dread sovereign Lord, King James, by the grace of God, of Great Britain, France, and Ireland King, Defender of the Faith, etc.

Having undertaken, for the glory of God, and advancement of the Christian faith, and honor of our King and Country, a voyage to plant the first colony in the northern parts of Virginia, do by these presents solemnly and mutually, in the presence of God, and one of another, covenant and combine our selves together into a civil body politic, for our better ordering and preservation and furtherance of the ends aforesaid; and by virtue hereof to enact, constitute, and frame such just and equal laws, ordinances, acts, constitutions and offices, from time to time, as shall be thought most meet and convenient for the general good of the Colony, unto which we promise all due submission and obedience. In witness whereof we have hereunder subscribed our names at Cape Cod, the eleventh of November, in the year of the reign of our sovereign lord, King James, of England, France, and Ireland, the eighteenth, and of Scotland the fifty-fourth. Anno Dom. 1620.