(By Yaroslav Trofimov, Alan Cullison & Habib Zahori, The Wall Street Journal, WSJ.com) KABUL – The Taliban launched a coordinated attack on the Afghan capital Monday, paralyzing the city for most of the day as militants set off explosions, took over buildings and attempted to disrupt the swearing-in of new cabinet ministers.

At least 12 people were killed, including seven militants, and 71 people were injured-mostly by hand-grenade fragments-by the time the attacks were over, said Afghan Defense Minister Abdul Rahim Wardak. Seven insurgents were shot dead in the fighting and an unknown number of other militants died in suicide blasts, he said.

Gun battles, punctuated by bomb and rocket blasts, raged in the usually heavily protected center of the city for more than four hours. Smoke billowed from a shopping center overrun by the insurgents just a few yards from the presidential palace.

The assault, claimed by the Taliban and believed to be carried out by members of an allied militant network led by Sirajuddin Haqqani, was among the most spectacular in Kabul in recent years. The Taliban-though relatively unpopular in Kabul and vastly outnumbered in the city by security forces-have increasingly focused on high-profile attacks on the Afghan capital, aiming to embarrass President Hamid Karzai’s administration and to showcase the insurgency’s reach.

“To be able to infiltrate at such depth, into the inner periphery of power here, is a mind-blowing achievement” for the Taliban, said Afghan parliament member Daud Sultanzoi. “If you look at the pattern, they are steadily escalating in their coordination and their capability.”

Afghan and Western officials, however, termed Monday’s assault a failure for the insurgents because, unlike in a similar raid on the Ministry of Justice in the same area a year ago, the militants couldn’t seize any government buildings and didn’t inflict large casualties.

In contrast to the response to an October assault on a United Nations guest house, Afghan troops Monday were prompt to arrive on the scene, engaging the insurgents and preventing wider bloodshed.

“We did not allow them to spread the catastrophe,” said Amrullah Saleh, the head of Afghanistan’s intelligence agency, the National Directorate for Security. “The attack was in no way a success for them.”

Commanders in the U.S.-led international military coalition, which is aiming to train and develop Afghan security forces so that they can eventually take over the fight against the Taliban, agreed. Afghan security forces “effectively dealt with the situation and should be commended,” said U.S. Gen. Stanley McChrystal, the commander of some 110,000 American-led international troops in Afghanistan.

President Barack Obama is sending some 30,000 additional American troops to Afghanistan this year, mostly to Taliban strongholds in the south and east of the country. Few of these troops will be heading to Kabul, which-while subjected to regular bombing and shooting attacks by insurgents-isn’t seen as being at risk of falling to the Taliban anytime soon.

Monday’s bloodshed began during the morning rush hour at Kabul’s central Pashtunistan square, a traffic-clogged circle ringed by some of the country’s most important buildings. These include the central bank, the entrance to the presidential palace, the ministries of finance, justice and mines, the Ferushgah shopping center, and the luxury Serena hotel favored by Westerners. 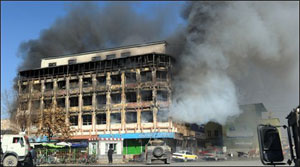 At 9:45 a.m., armed insurgents-their faces hidden by scarves and their weapons hidden under shawls- raced into the Ferushgah mall and ordered vendors and customers to leave, in an apparent attempt to minimize civilian casualties.

“We locked our shops and rushed outside. As we were running down, the armed men ran up the stairs to take positions on the top floor,” said Mohammad Farooq, a 29-year-old shopkeeper. Some vendors claimed to have seen these attackers, Pashtu-speaking men in their 20s, visiting the center’s top floor the previous day, ostensibly to buy coats, he said.

Five minutes later, a suicide bomber blew himself up on the square, near the central bank entrance. The powerful blast shook the presidential palace, where most members of Afghanistan’s new cabinet, who were approved by parliament earlier this month, were due to be sworn in. The swearing-in ceremony took place regardless.

The initial blast was followed by several other explosions, including two rockets that hit the Serena, inflicting only minor damage. Elsewhere near the Pashtunistan square, militants took over the Bamiyan Hotel adjoining the Ariana cinema, according to Interior Minister Hanif Atmar.

As the Ferushgah center erupted in flames, the insurgents holed up inside began firing bullets and rocket-propelled grenades at security personnel on the Serena’s roof and in nearby government buildings. Some of the hotel’s windows were shattered by bullets as its guests, including diplomats and journalists, took cover in the basement.

While U.S. military helicopters hovered overhead, most of the fighting on Monday was done by Afghan commandos and soldiers, who arrived on the scene within minutes of the initial blast. According to Mr. Saleh, the intelligence chief, the insurgents’ initial goal-thwarted by the security forces-was to penetrate the central-bank building, which borders on the presidential palace.

An hour and a half after the attacks began, and as the firing on Pashtunistan square died down, another blast occurred near the Ministry of Education two blocks away, setting the adjoining Gul Bahar shopping center on fire. That bomb had been hidden in a vehicle disguised as an ambulance, according to Mr. Atmar. One more bomb went off Monday near the Pamir cinema building, also in the same area.

Security in central Kabul was restored by nightfall. The Ferushgah shopping center had been reduced to a smoldering hulk.

“The enemies of the Afghan people carried out a series of attacks today, causing fear and terror among the population,” President Karzai said in a statement. The United Nations representative to Afghanistan, Kai Eide, added that “the location of the attack, in central Kabul, at a time when many civilians were present, demonstrates a staggering disregard for civilian lives.”

Taliban spokesman Zabihullah Mujahid said the assault was carried out by 20 militants who infiltrated the city with weapons and suicide vests.

Mr. Atmar, the interior minister, said some of the suicide bombers who struck Kabul Monday were believed to be foreigners.

Mr. Karzai and his senior ministers are expected to travel to London on Jan. 28, for a high-level international conference aiming to promote Afghanistan’s development and roll back the Taliban-led insurgency.

“Kabul is the capital of the country,” said Mr. Wardak, the defense minister. “There is no doubt that the terrorists will use today’s attack for propaganda, and that they consider it a victory.”

Write to Yaroslav Trofimov at yaroslav.trofimov@wsj.com and Alan Cullison at alan.cullison@wsj.com.

1. a) What actions did Taliban terrorists take in Kabul Monday?
b) At what targets did the terrorists aim their attacks?

2. What is believed to be the Taliban’s motive for attacking Afghanistan’s capital city Kabul?

3. Why do Afghan and Western officials say the Taliban’s attack was a failure? Be specific.

4. a) How was the response from Afghan troops in Monday’s attack different from the October attack of a U.N. guest house?
b) What did Gen. McChrystal think of the Afghan troops’ response to the Taliban?

5. In paragraph 12 the reporters state: “armed insurgents…raced into the Ferushgah mall and ordered vendors and customers to leave, in an apparent attempt to minimize civilian casualties.” Do you agree with this assertion?  Explain your answer.

The Taliban, a Muslim fundamentalist group, took control of Afghanistan’s government in 1996 and ruled until the 2001 U.S.-led invasion drove it from power. Despite its ouster, however, remnants of the Taliban have maintained influence in rural regions south and east of Kabul. The group is known for having provided safe haven to Osama bin Laden and al-Qaeda as well as for its rigid interpretation of Islamic law, under which it publicly executed criminals and outlawed the education of women. Though the group has been out of power for several years, it remains a cultural force in the region that operates parallel governance structures aimed at undermining the U.S.-backed central government. Clashes between Taliban-linked fighters and coalition forces increased in the first half of 2008 and continued in 2009, highlighting the Taliban’s resurgence and complicating efforts by NATO and U.S. forces to stabilize the country. The Pakistani army, meanwhile, is tackling its own Taliban insurgency. (from cfr.org/publication/10551.)

Read more about the Taliban in Afghanistan at cfr.org/publication/10551.