(by Zarar Khan, YahooNews.com) AP, ISLAMABAD – The Pakistani Taliban claimed responsibility Monday for a pre-dawn attack on tankers carrying fuel to Afghanistan for U.S. and other NATO forces, left vulnerable on the side of the road after Pakistan shut down a key border crossing.

About a dozen militants [shot at] the vehicles parked at a truck stop on the outskirts of the capital Islamabad with automatic gunfire. Some 20 trucks went up in flames and four people were killed and seven injured, authorities said.

There have been four such attacks since Pakistan last Thursday [closed] its main border crossing into Afghanistan to NATO supply convoys in apparent reaction to a series of alleged NATO incursions, including a helicopter attack that killed three Pakistani soldiers. Traffic has since been backing up at various points along the route from the southern port city of Karachi to the crossing at Torkham – where scores of trucks remain stranded and vulnerable to attack in the volatile Khyber Pass. …….

Although Pakistan says the Torkham blockade will soon be lifted, the latest attacks and the Taliban threat to launch more assaults seemed certain to raise the stakes in the closure, which has exacerbated tensions between Washington and Islamabad. Convoys crossing from Pakistan bring fuel, military vehicles, spare parts, clothing and other non-lethal supplies for [NATO/U.S.] troops. …….

The Pakistani Taliban claimed responsibility for the Islamabad attack in a telephone call to an Associated Press reporter.  Spokesman Azam Tariq said a new wing of the group had been created to strike the convoys and that the attacks “would continue until the supplies are completely stopped.”

Trucks moving supplies from Karachi through Pakistan into Afghanistan make frequent stops along the way for their drivers to rest along the several-day journey, and Islamabad police chief Kalim Imam said it was impossible for police or local authorities to protect them all the time.

“This entire thing is very vulnerable for such attacks,” he said.

About 150 vehicles are backed up at the Torkham border crossing itself, with hundreds more in nearby areas. Torkham lies some 120 miles … west of Islamabad. …….

There was no immediate claim of responsibility for Monday’s second attack on the two trucks heading to the Chaman border crossing in the southwest, which has remained open.

Mohammad Hashim, a government official in the southwest district of Kalat where the attack took place … said two gunmen on a motorcycle opened fire on the trucks, then torched the vehicles, killing one driver. The unidentified gunmen fled.

One of the trucks was carrying water while it was not yet clear what the other truck’s cargo was, he said.

While NATO and the United States have alternative supply routes into landlocked Afghanistan, the Pakistani ones are the cheapest and most convenient. Most of the coalition’s non-lethal supplies are transported over Pakistani soil after being unloaded at docks in Karachi. There are some 140,000 international forces currently in Afghanistan.

In addition to the Torkham and Chaman crossings from Pakistan, NATO also receives supplies via the Central Asian states north of Afghanistan. …….

On Friday, a day after the closure of the Khyber Pass route to NATO and U.S. traffic, there were two attacks on oil tankers headed to the country, one of which was claimed by the Pakistani Taliban. …….

While attacks on convoys in Pakistan give militants a propaganda victory, coalition officials say they do not result in shortages in Afghanistan. Hundreds of trucks still cross into Afghanistan each day.

Some attacks are believed to be the work of criminals, who can sell much of the vehicles, clothes and other goods they carry. …

On Sunday, Pakistan’s ambassador to the U.S., Husain Haqqani, said the border crossing would be soon reopened.

Associated Press writers Rasool Dawar and Riaz Khan in Peshawar and Ashraf Khan in Karachi contributed to this report.

Copyright ©2010 The Associated Press. All rights reserved. Reprinted here for educational purposes only. The information contained in this AP News report may not be published, broadcast, rewritten, or redistributed without the prior written authority of The Associated Press. Visit news.yahoo.com/s/ap/as_pakistan/print for the original post.

NOTE: Pakistan is 11 hours ahead of the U.S.

1. a) Where did the first Taliban attack on supply trucks headed to Afghanistan occur on Monday, October 4th?
b) What was the result of the attack?

2. Where and when did the second attack on Monday take place?

3. What types of supplies were destroyed in the attacks on Monday, and in the previous two attacks on Friday?

4. What action taken by the Pakistani government is believed to be the reason for the Taliban’s ability to carry out four attacks on NATO supply trucks since Friday?

5. What types of supplies are generally brought into Afghanistan from Pakistan?

6. a) What is the Taliban’s goal for attacking NATO supply trucks?
b) What effect have the attacks had on U.S. troops’ provisions? Explain.

7. The U.S. Congress approved a 5-year $7.5 billion aid package to Pakistan last year (which includes funds for two hydro-electric dams, drinking water and irrigation projects, and health centers). The Taliban continues to operate its terrorist attacks from Pakistan. On Sunday, Pakistan’s ambassador to the U.S. said the border crossing would be reopened soon. Do you think the Obama administration should make any demands of the Pakistani government at this point?  Explain your answer.

Pakistan’s remote Federally Administered Tribal Areas (the tribal lands) have been a training ground for insurgents and a focal point for terrorism fears, particularly since the 9/11 attacks.

The semi-autonomous tribal lands consist of seven parts called “agencies” … There are also six smaller zones known as Frontier Regions in the transitional area between the tribal lands and the North-West Frontier Province to the east. The harsh, mountainous territory of the tribal lands runs along the Afghanistan border, drawn during colonial times by British Diplomat Sir Henry Mortimer Durand as a means to divide and weaken the eleven major Pashtun tribes and turn Afghanistan into a buffer zone between the British and Russian empires. (from GlobalSecurity.org)

Go to worldatlas.com for a map of Pakistan.

View maps of the Federally Administered Tribal Areas at WashingtonPost.com.

For background information on Pakistan, go to the CIA World FactBook website here.

A map of the Afghanistan supply route (from BBC): 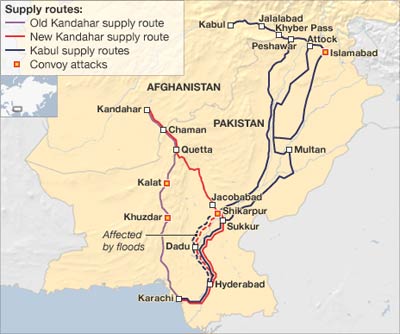