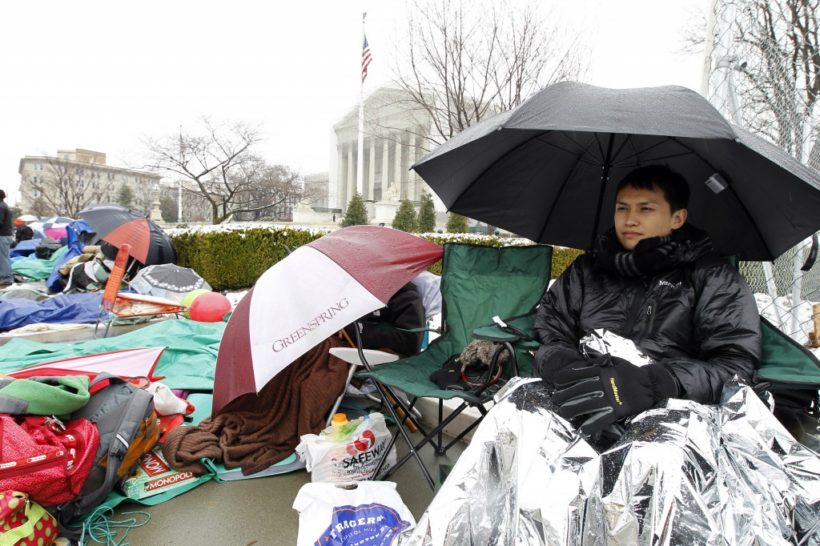 The court announced on the first day of the new term [Monday, October 5th], something that previously had seemed unnecessary to spell out: “Only Bar members who actually intend to attend argument will be allowed in the line for the Bar section; ‘line standers’ will not be permitted.”

In other words, lawyers cannot pay someone to hold a spot for them when the court has a big argument — or even send one of the firm’s lowly associates [to stand in line for them].

Line-standing has become big business in Washington, where companies supply a placeholder  [to stand in line for those who want to get into a Supreme Court oral argument, and also for lobbyists who want to get into a congressional hearing.] Line standers have become part of the spectacle of a major Supreme Court hearing, where people pay up to $50 an hour to have someone secure one of several hundred spots in the grand marble chamber.

A couple of years ago, Slate .com found that some were paying about $6,000 for the multi-day ordeal required to ensure admittance through the public line for an oral argument on same-sex marriage. Similar camp-outs have occurred when the court confronted Second Amendment cases and the Affordable Care Act [ObamaCare]. The court’s rule change did not change the rules for the public. [The court’s rules regarding the public line say simply: “Please do not hold a space in either line for others who have not yet arrived,” but they do not explicitly ban hiring someone to hold a place.]

… It is unclear how the new policy will be enforced, but as several attorneys noted, the need is rare.

“There are probably only two or three cases a year when there are line-sitters — if that,” said Kannon Shanmugam, a lawyer who frequently argues before the court. “But it is an unseemly practice, and the court was right to ban it.”

The court was typically tight-lipped about exactly how the change came about. “Court officials were aware of the increasing use of line-standers, and this new procedure attempts to end the practice,” public information officer Kathleen Arberg said when asked for an explanation.

But the scene before the hearing this spring on same-sex marriage probably had an impact. …

The courtroom has a maximum capacity of about 400, and some of these seats are set aside for the media and guests of the justices. At major arguments, there can be fewer than 100 seats available for the public; the bar section fluctuates between 70 and 100. … Lawyers who are not able to get seats are consigned to the lawyer’s lounge, a room outside the courtroom where they could at least listen live to the argument. The public doesn’t have such an option. [Although live audio of oral arguments is not available to the public, the audio recordings of all oral arguments heard by the U.S. Supreme Court are available to the public at the end of each argument week. The audio recordings are posted on Fridays after Conference.]

Gabe Roth, leader of Fix the Court, a group that advocates for greater transparency at the Supreme Court, said the court’s move shows that it at least understands there is a problem.

“The best way to meet the increased demand for entry into Supreme Court hearings, both from members of the Supreme Court Bar and from the general public, is for the court to end its broadcast media ban,” he said.

If nothing else, make the audio of the arguments live, he said, so the public has the same access as the lawyers.

1. Why do lawyers become members of the U.S. Supreme Court bar?

3. a) What action did the court take on line standers when it opened its 2015-2016 session last week?
b) Why did the court take this action?
c) The court’s announcement did not change the rules for the public. Do you think the same rule should apply to the public line? Explain your answer.

4. a) According to Kannon Shanmugam, a lawyer who frequently argues before the court, “There are probably only two or three cases a year when there are line-sitters.” Why do you think this is so?
b) How many seats are available in the courtroom? Be specific.

5. If a lawyer does not get a seat in the lawyers section for oral arguments, how can he/she follow the proceedings?

7. Re-read the paragraphs 12-15. Then read the excerpt below from a National Law Journal report:

Judith Schaeffer, acting president of the Constitutional Accountability Center, admits that she has used a line stander, but only once—for the same-sex marriage arguments.

“My reaction as a bar member is that the court really should take a step back and consider what has brought the court to this step,” she said. “To me, it’s a very simple fact that many Americans as well as bar members are deeply interested in proceedings of the court. There is a very simple solution—live audio or preferably live video.”

Schaeffer noted that live audio of arguments are broadcast into the court’s lawyers’ lounge. “There’s no legitimate reason for the court not to share that with the public,” she added. “It doesn’t require new technology or cameras—just somebody with authority to turn that switch on.”

What do you think of Gabe Roth and Judith Schaeffer’s suggestions? Is there a legitimate reason that the American public should not be able to listen to the court’s proceedings live the way lawyers are able to in the lawyer’s lounge in the Supreme Court building? Explain your answer.

OPTIONAL QUESTIONS: Read the “Background” information below the questions.

2. What must a case involve for it to be considered by the Supreme Court for review?

Read more about the cases accepted by the Supreme Court for 2015-16 at the official website:  supremecourtus.gov.