Supreme Court Justice Souter to Retire at End of Term 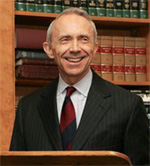 (by Audrey Hudson and Stephen Dinan, WashingtonTimes.com) – Supreme Court Justice David H. Souter has informed the White House he plans to retire at the end of the session in June, providing President Barack Obama his first opening to nominate his own choice to the high court.

Justice Souter and Supreme Court officials are not commenting, but NBC News and the Associated Press say their sources confirm the 69-year-old New Hampshire resident plans to leave Washington and return home.

NPR first reported late Thursday that Justice Souter was stepping down and said he would remain on the court until a successor is confirmed by the Senate.

“Legal Washington’s best-kept secret leaked this afternoon,” Thomas C. Goldstein wrote on SCOTUSBlog, a premier site for covering the Supreme Court. Mr. Goldstein founded the blog and is a founding partner in a firm that specializes in Supreme Court litigation.

“That fact or presumed fact, given how the message was communicated to the White House was very closely held there, at the Senate, and at the Court closely enough that preparations for the nomination of a successor were substantially restrained among a group that not only was under strict orders but also genuinely appreciated both the Justices privacy and his efforts to signal his intentions in advance to the President and the Senate Judiciary Committee,” Mr. Goldstein wrote.

Though Justice Souter was nominated by President George H.W. Bush [a Republican], his voting record leaned left as he often sided with the more liberal justices on the court.

His replacement is not expected to change the political split on the bench.

There has been speculation about Justice Souter’s retirement over recent years, with court-watchers saying they wouldn’t be surprised to see the him retire before 76-year-old Justice Ruth Bader Ginsburg or 89-year-old Justice John Paul Stevens.

The decision would put yet another challenge on Mr. Obama’s already full desk, and put him in the middle of what is likely to be a bitter partisan battle at a time when he has said he will seek bipartisanship. The president will also be under pressure to choose another woman for the court.

Justice Ginsburg is the only woman who sits on the nine-member bench.

During the campaign, Mr. Obama described the kinds of judges he was looking for: “We need somebody who’s got the heart, the empathy, to recognize what it’s like to be a young teenage mom. The empathy to understand what it’s like to be poor, or African-American, or gay, or disabled, or old. And that’s the criteria by which I’m going to be selecting my judges.”

Among those being talked about as a possible replacement is Sonia Sotomayor, 56. She is judge on the U.S. Court of Appeals for the 2nd Circuit and was nominated to the bench by President George H.W. Bush. The Yale Law School graduate would become the first Hispanic on the high court.

Others frontrunners include Diane Pamela Wood, 60, a judge on the U.S. Court of Appeals for the 7th Circuit who knows President Obama from the University of Chicago Law School. And Solicitor General Elena Kagan, 49, who was confirmed by the Senate just last month. She is a former Harvard Law School dean.

Justice Souter, a former Rhodes Scholar, was born in Melrose, Mass., and graduated from Harvard College and Harvard Law School.

In 1978, Justice Souter was named an associate justice of the Superior Court of New Hampshire, was appointed five years later to the state’s Supreme Court and became a judge of the U.S. States Court of Appeals for the First Circuit in 1990.

“America owes a debt of gratitude to Justice Souter for his service,” said Marge Baker, executive vice president for People for the American Way. “Justice Souter has shown a deep understanding not only of the law, but of the implications the Court’s decisions have in the real world. He has been an important voice against ideological extremism.”

Given the makeup of the Senate, Democrats have immense power to push through any of Mr. Obama’s judicial nominees, particularly after Sen. Arlen Specter of Pennsylvania announced this week he will flip parties and become a Democrat.

Mr. Specter was Republicans’ top member on the Judiciary Committee, and Republicans will have to reorganize themselves even as the begin to prepare for a court battle.

Joseph Weber contributed to this article.

1. List the names and ages of the Justices currently serving on the Supreme Court. CHALLENGE: Also name the year each justice was appointed, and the president who appointed him/her.

3. Why isn’t Justice Souter’s replacement expected to change the current voting split of the current court (between liberal-activist judges and conservative-constructionist judges)?

4. a) How many Supreme Court Justices did Presidents Clinton and George W. Bush each replace during their presidencies?
b) CHALLENGE: Can you name these justices?

On the Role of Judges
Judges are like umpires in baseball or referees in football or basketball. Their role is to see that the rules of court procedures are followed by both sides. Like the ump, they call ’em as they see ’em, according to the facts and law-without regard to which side is popular (no home field advantage), without regard to who is “favored,” without regard for what the spectators want, and without regard to whether the judge agrees with the law. (from the American Bar Asociation)

NOTE: Because six members of the Court w[ere] age 69 or older when [Barack Obama was] inaugurated, it’s likely that multiple vacancies will occur during [his] administration. This will create a rare opportunity for [him] to alter the direction of the High Court for the next several decades. It’s crucial, therefore, to have a president who understands the judiciary’s proper role. As Ronald Reagan once noted, “[The Founders] knew that the courts, like the Constitution itself, must not be liberal or conservative.” For Reagan and for the Founders, judges were to be selected based on their ability to put political preferences aside and interpret the Constitution and laws based on their original meaning.  Rather than scrutinizing judicial nominees based on their perceived political leanings, the next president should appoint judges who apply the law regardless of their own policy preferences. (from “Misunderstanding the Role of Judges” by Deborah O’Malley)

NOTES ON PROCEDURE FOR NOMINATING AND CONFIRMING FEDERAL AND SUPREME COURT JUDGES:
*The President nominates a person, and sends the name to the Senate Judiciary Committee,
*The nominee is questioned by the Senate Judiciary Committee (confirmation hearings). If confirmed,
*The name goes to the Senate for a vote.
*If the full Senate votes to confirm a nominee by 51 votes (a simple majority) or more, the nominee is confirmed.