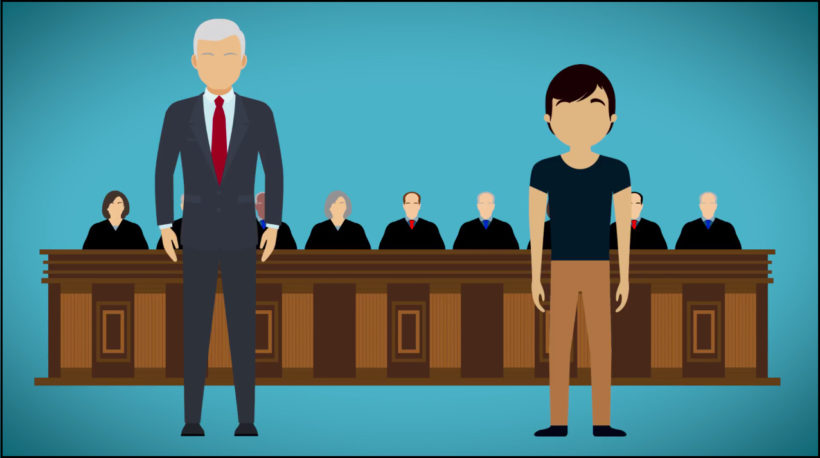 (by Andrew Chung, Reuters) WASHINGTON – U.S. Supreme Court justices on Monday expressed skepticism toward part of an immigration law requiring the deportation of immigrants who commit violent felonies because of uncertainty over which crimes fit the bill and which do not.

The justices heard arguments in the government’s appeal of a lower court’s ruling that language in the Immigration and Nationality Act calling for deportation of legal immigrants convicted of a “crime of violence” was so vague that it violated their rights to due process of law under the U.S. Constitution.

The case involves a Filipino legal immigrant named James Garcia Dimaya who federal authorities ordered deported after he was convicted in two California home burglaries, though neither crime involved violence.

…The ruling in the case could help clarify the crimes for which non-citizen immigrants may be expelled, affecting the Trump administration’s policy of stepping up the removal those with criminal records. …

Monday’s arguments marked the second time the court has tried to tackle the case. It heard arguments in January when the nine-seat court was one justice short [following the death of Justice Antonin Scalia], then decided in June to have the case re-argued this term after Conservative Justice Neil Gorsuch [was confirmed]. …..

Dimaya came to the United States from the Philippines as a legal permanent resident in 1992 at age 13. He lived with his family in the San Francisco Bay area, and had worked in several retail store jobs, including as a manager.

He was convicted in residential burglaries in 2007 and 2009 in crimes in which no violence was used and no one was injured. For each conviction he was sentenced to two years in prison.

In 2010, the Obama administration began a process to deport Dimaya. The Justice Department’s Board of Immigration Appeals, the highest U.S. administrative body for interpreting and applying immigration laws, refused to cancel his expulsion because the law involved defines burglary as a “crime of violence.”

In the federal criminal code, a “crime of violence” includes offenses in which force either was used or carried a “substantial risk” that it would be used.

The San Francisco-based liberal 9th U.S. Circuit Court of Appeals ruled in 2015 that the definition as applied to non-citizen immigrants was unconstitutionally vague and can lead to arbitrary enforcement of the law. The appeals court relied on a decision that same year by the U.S. Supreme Court in a different case, which found that a similar provision in a federal criminal sentencing law was overly broad.

The 7th Circuit Court in Chicago handed down a similar ruling to the 9th Circuit, while the 5th Circuit in New Orleans ruled in favor of the government.

The split prompted the high court to decide the case of Lynch vs. Dimaya. By the time the decision is handed down, the case will probably be relabeled Sessions vs. Dimaya, to reflect expected change of attorney general. [President Obama’s Attorney General was Loretta Lynch; President Trump’s Attorney General is Jeff Sessions.]

The case was argued on Monday, the first day of the court’s new term. A ruling is due by the end of June.

NOTE TO STUDENTS: Before answering the questions, read the “Background” and watch the video under “Resources” below the questions.

1. a) How many justices are on the U.S. Supreme Court?
b) Who is the Chief Justice?
c) List the other justices.

2. Regarding the case:
a) What status does James Garcia Dimaya have? When did he come to the U.S.?
b) What crimes was Mr. Dimaya convicted of committing? What sentence did he receive for each crime?
c) When/why did the Obama administration begin deportation process for Dimaya?
d) Why did the Justice Department’s Board of Immigration Appeals, the highest U.S. administrative body for interpreting and applying immigration laws, refuse to cancel his expulsion proceeding?

3. How does the federal criminal code describe a “crime of violence”?

4. How did the San Francisco-based liberal 9th U.S. Circuit Court of Appeals rule on the case in 2015?

5. When will the justices hand down their ruling on the case?

CHALLENGE: Do an internet search to find out the specific details of Mr. Dimaya’s crimes. There should be many news reports detailing the case as this will be a very significant decision.

Read more about the cases accepted by the Supreme Court for 2017-18 at the official website:  supremecourt.gov.