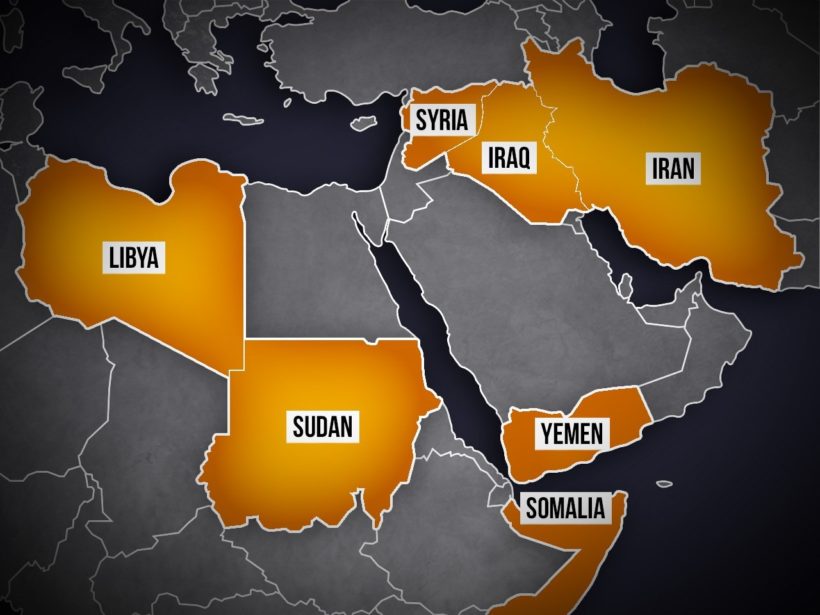 (by Jessica Vaughan, Center for Immigration Studies) – A review of information compiled by a Senate committee in 2016 reveals that 72 individuals from the seven countries covered in President Trump’s vetting executive order have been convicted in terror cases since the 9/11 attacks. These facts stand in stark contrast to the [ruling] by the Ninth Circuit judges who have blocked the president’s order on the basis that there is no evidence showing a risk to the United States in allowing aliens from these seven terror-associated countries to come in.

In June 2016 the Senate Subcommittee on Immigration and the National Interest, then chaired by new Attorney General Jeff Sessions, released a report on individuals convicted in terror cases since 9/11. Using open sources (because the Obama administration refused to provide government records), the report found that 380 out of 580 people convicted in terror cases since 9/11 were foreign-born. The report is no longer available on the Senate website, but a summary is available here.

The Center has extracted information on 72 individuals named in the Senate report whose country of origin is one of the seven terror-associated countries included in the vetting executive order: Iran, Iraq, Libya, Somalia, Sudan, Syria, and Yemen.

The United States has admitted terrorists from all of the seven dangerous countries:

According to the report, at least 17 individuals entered as refugees from these terror-prone countries. Three came in on student visas and one arrived on a diplomatic visa.

At least 25 of these immigrants eventually became citizens. Ten were lawful permanent residents, and four were illegal aliens.

These immigrant terrorists lived in at least 16 different states, with the largest number from the terror-associated countries living in New York (10), Minnesota (8), California (8), and Michigan (6). Ironically, Minnesota was one of the states suing to block Trump’s order to pause entries from the terror-associated countries, claiming it harmed the state.

At least two of the terrorists were living in Washington, which joined with Minnesota in the lawsuit to block the order.

Thirty-three of the 72 individuals from the seven terror-associated countries were convicted of very serious terror-related crimes, and were sentenced to at least three years imprisonment. The crimes included use of a weapon of mass destruction, conspiracy to commit a terror act, material support of a terrorist or terror group, international money laundering conspiracy, possession of explosives or missiles, and unlawful possession of a machine gun.

Some opponents of the travel suspension have tried to claim that the Senate report was flawed because it included individuals who were not necessarily terrorists because they were convicted of crimes such as identity fraud and false statements. About a dozen individuals in the group from the seven terror-associated countries are in this category. Some are individuals who were arrested and convicted in the months following 9/11 for involvement in a fraudulent hazardous materials and commercial driver’s license scheme that was extremely worrisome to law enforcement and counter-terrorism agencies, although a direct link to the 9/11 plot was never claimed.

The information in this report was compiled by Senate staff from open sources, and certainly could have been found by the judges if they or their clerks had looked for it.

Another example that should have come to mind is that of Abdul Razak Ali Artan, who attacked and wounded 11 people on the campus of Ohio State University in November 2016. Artan was a Somalian who arrived in 2007 as a refugee.

President Trump’s vetting order is clearly legal under the provisions of section 212(f) of the Immigration and Nationality Act, which says that the president can suspend the entry of any alien or group of aliens if he finds it to be detrimental to the national interest. He should not have to provide any more justification than was already presented in the order, but if judges demand more reasons, here are 72.

1. On what grounds did the judges from the Ninth Circuit Court block President Trump’s executive order putting a temporary hold on travel from 7 countries?

2. List the countries President Trump included in his executive order.

3. What does a review of information compiled by the Senate Subcommittee on Immigration and the National Interest in 2016 reveal about immigrants from this country and terrorism?

5. Under what section/law is President Trump authorized to write the executive order on travel from those 7 countries?

For Home Discussion:
Discuss with a parent: Some opposed to the temporary halt on travelers from these countries say that there have been no terror attacks on American soil from individuals from those countries. Others say that the President is targeting Muslims; however, there are 50 Muslim majority countries in the world and the president explained the countries listed do not have stable / reliable governments from whom to obtain accurate information on their citizens. What do you think? Do you agree with the 9th Circuit court or with President Trump? Discuss your answers.

Read a recent editorial posted at StudentNewsDaily: Trump, Refugees, and the Truth