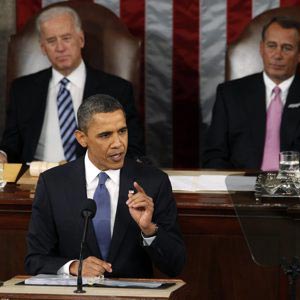 (by S.A. Miller and Geoff Earle, NYPost.com) WASHINGTON, DC — President Obama last night recast himself as a budget hawk with his State of the Union Address, calling for a spending freeze and a ban on earmarks — even as he proposed new funding for “targeted investments” to make the United States more economically competitive.

Speaking before a Congress that had some Democrats and Republicans sitting together in a rare show of bipartisanship, Obama likened his plan to boost the economy and create new jobs to starting the U.S. space program after the Soviets launched the Sputnik satellite in 1957.

“After investing in better research and education, we didn’t just surpass the Soviets; we unleashed a wave of innovation that created new industries and millions of new jobs,” Obama said. “This is our generation’s Sputnik moment.”

Seizing on calls for bipartisan government since the Jan. 8 Tucson shootings that wounded Arizona Rep. Gabrielle Giffords, Obama urged lawmakers to work together.

“We will move forward together, or not at all — for the challenges we face are bigger than party and bigger than politics,” Obama said.

The president vowed to:

* Impose a five-year domestic spending freeze, reducing the deficit by more than $400 billion.

Obama conceded there could be changes to his vaunted health-care bill, saying, “Let’s fix what needs fixing and move forward.”

But the partisan cheerleading was somewhat restrained during the 70-minute speech, interrupted by applause just 44 times and by standing ovations a relatively few 24 times.

With the call for spending cuts, Obama aimed to send a message to Capitol Hill Republicans and disenchanted voters that he’s serious about tackling the out-of-control US debt, which tops $14 trillion.

The speech also reflected the new political reality facing Obama after voters largely rejected his big-government agenda in November’s elections, handing Republicans control of the House and a larger minority in the Senate.

Obama insisted some of his past efforts are paying off.

“Two years after the worst recession most of us have ever known, the stock market has come roaring back. Corporate profits are up. The economy is growing again,” he said.

Guests in First Lady Michelle Obama ‘s viewing box included the parents and 11-year-old brother of Christina Taylor Green, the 9-year-old who died in the Tucson rampage — their faces still taut with grief. Another guest was Daniel Hernandez, the congressional intern credited with helping save Giffords’ life.

In their own gesture, Arizona lawmakers kept an empty seat for Giffords. Later, Giffords’ office released a photo of her husband, Mark Kelly, watching the speech with her in a Houston hospital.

Many in Congress put bipartisanship on display by sitting with members of the other party.

Obama said the one-night civility would not be enough.

Only six of the nine Supreme Court Justices were on hand, a year after the president scolded the court for lifting restrictions on corporate campaign donations. Justices Antonin Scalia, Clarence Thomas and Samuel Alito were no-shows.

“We hold to a couple of simple convictions: Endless borrowing is not a strategy; spending cuts have to come first,” he said.

1. What was the main focus of President Obama’s State of the Union Address?

2. List some of the things the president promised to do to improve the economy.

3. a) What statement did President Obama make about the economy? (see para. 12)
b) What is your reaction to this encouraging statement?
c) Ask a parent the same question.

4. Republicans won a record majority of seats in the House of Representatives in November. Do you think this fact influenced the President’s decision to call for Democrats and Republicans to work together? Explain your answer.

5. Tone is the attitude a speaker takes towards a subject. What was the tone of the president’s speech?

6. If you haven’t done so already, watch/read the President’s State of the Union Address at YouTube.
a) Do you think the President is focusing on the correct issues? Explain your answer.
b) Ask a parent the same question.

CHALLENGE QUESTION: Watch/read the Republican response to the President’s State of the Union at YouTube. What do you think of Rep. Paul Ryan’s response?

The Associated Press conducted a Fact Check of some of President Obama’s “claims and how they compare with the facts.”  Read the AP’s analysis at google.com/hostednews.

For texts and/or videos of some of the Presidential State of the Union Addresses since 1945, go to c-spanvideo.org.