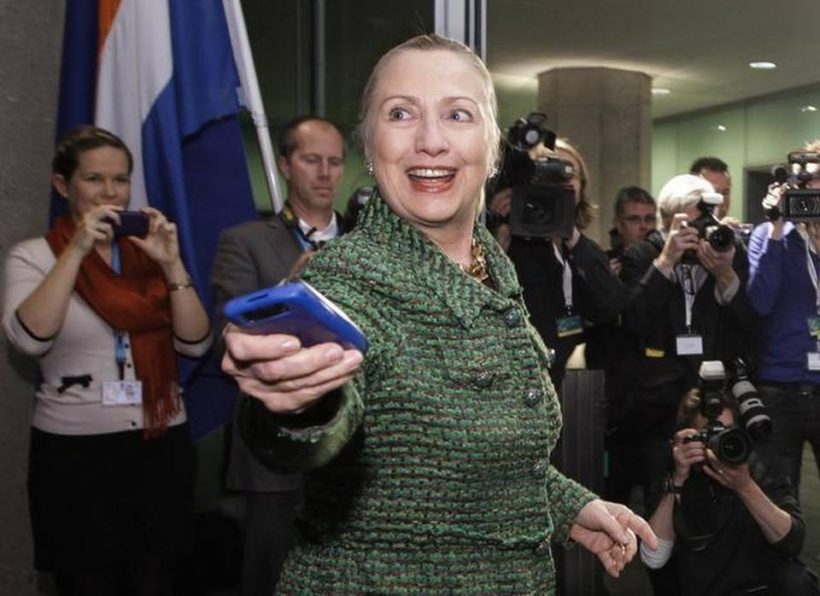 In this Dec. 8, 2011, file photo, then-U.S. Secretary of State Hillary Rodham Clinton hands off her mobile phone after arriving to meet with Dutch Foreign Minister Uri Rosenthal at the Ministry of Foreign Affairs in The Hague, Netherlands. (AP Photo/J. Scott Applewhite, Pool/File)

(by Jack Gillum, Associated Press) WASHINGTON — The U.S. State Department says it can find only four emails sent between former Secretary Hillary Rodham Clinton and her staff concerning drone strikes and certain U.S. surveillance programs, and those notes have little to do with either subject. [Mrs. Clinton was the Secretary of State from January 2009 to February 2013. In October 2014 the State Department for the first time asked the Secretary to return her public records to the Department.]

She asks for a phone call in one, a phone number in another. She seeks advice on how best to condemn information leaks, and accidentally replies to one work email with questions apparently about decorations.

The messages also reveal Clinton used an iPad to email while secretary of state in addition to her BlackBerry, despite her explanation she set up a private email account and [personal] server while she was the nation’s top diplomat so that she could carry a single device.

The four emails were obtained by The Associated Press under a Freedom of Information Act (FOIA) request in 2013 and offer one of the first looks into Clinton’s correspondence at the State Department. It is the first time the State Department has provided Clinton-related documents in response to several outstanding FOIA requests, the first of which AP filed in 2010.

The response also came about three weeks after AP filed a federal lawsuit against the State Department, seeking to force the release of materials during Clinton’s tenure.

Clinton is widely expected to announce her candidacy for president next month, and will enter the race as the favorite to win the Democratic nomination.

The 2013 request sought correspondence between Clinton and her advisers over a four-year period that contained keywords such as “drone,” ”metadata” and “prism.” The latter was among several code words for controversial U.S. surveillance programs revealed by former National Security Agency contractor Edward Snowden.

Although Clinton left office four months before the Snowden leaks were first published in June 2013, the AP’s request sought messages about those programs before they were publicly disclosed. The request also asked for certain emails about government programs to eavesdrop on terror suspects believed to be foreigners.

Steven Aftergood, a government secrecy expert at the Federation of American Scientists, said the low number of emails provided to AP could be because the State Department uses different words to describe its operations — such as “UAV,” or unmanned aerial vehicle, instead of “drone.”

It’s also possible that Clinton and her advisers’ emails are not in the department’s archives, he said.

“If there are four, one would expect there to be quite a few more than that,” Aftergood said. “And it looks like another indication of faulty records management and retrieval at the State Department.”

Clinton has said she exchanged about 60,000 emails while secretary of state, about half of which were work-related. She said none contained classified information, and that her private email system did not suffer any security breaches.

The highly unusual practice of a Cabinet-level official physically running her own email server gave Clinton complete control over access to her message archives. She deleted emails – some 30,000 in total – she described as personal in nature, and has declined the request of Republicans that she turn over her server for an independent review. [She has since erased all emails, which are public record, from her hard drive.]

Among the four emails obtained by AP is one in which Clinton accidentally mingled personal and work matters. In reply to a message sent in September 2011 by adviser Huma Abedin to Clinton’s personal email account, which contained an AP story about a drone strike in Pakistan, Clinton mistakenly replied with questions that appear to be about decorations.

“I like the idea of these,” she wrote to Abedin. “How high are they? What would the bench be made of? And I’d prefer two shelves or attractive boxes/baskets/ conmtainers (sic) on one. What do you think?”

Abedin replied, “Did u mean to send to me?” To which Clinton wrote, “No-sorry! Also, pls let me know if you got a reply from my ipad. I’m not sure replies go thru.”

Earlier this month, Clinton said she chose a personal account over a government one out of convenience, describing it as a way to carry a single device, rather than a State Department-issued BlackBerry for work emails and a second device for personal messages.

“Looking back, it would have been probably, you know, smarter to have used two devices,” Clinton said. Her spokesman, Nick Merrill, said Tuesday that the secretary used her iPad from time to time, primarily to read news clippings.

Also Tuesday, Republican South Carolina Rep. Trey Gowdy, the chairman of a House committee investigating the 2012 attacks in Benghazi, Libya, said he wants to interview Clinton by May 1.

Gowdy said the recorded interview would help the committee better understand decisions she made related to the creation, maintenance, retention, and ultimately deletion of public records – namely her emails.

Clinton spokesman Nick Merrill said Tuesday that Clinton told Gowdy’s committee months ago that she was ready to appear at a public hearing.

Associated Press writers Ken Thomas and Matthew Daly contributed to this report. Reprinted here for educational purposes only. May not be reproduced on other websites without permission from the Associated Press.

Note to Students: Read the “Background” below before answering the questions.

1. What is the Freedom of Information Act?

3. a) Approximately how many emails does Mrs. Clinton say she exchanged during her four years as Secretary of State?
b) How many of these emails were classified, according to Mrs. Clinton?
c) How many of those emails did the State Department release to the Associated Press under the FOIA request?
d) What possible reasons does government secrecy expert Steven Aftergood give for the low number of emails given to the Associated Press by the State Department?

4. a) What reason did Secretary Clinton give for her decision to keep all of her government emails on a personal server she ran out of her home, instead of using an official State Department email address?
b) What information makes this explanation appear questionable?

5. Clinton was under a subpoena order from the U.S. House Select Committee on Benghazi, Libya for all documents related to the 2012 attacks on the American compound there. This week David Kendall, an attorney for Clinton, said the 900 pages of printed emails previously provided to the Committee cover its request. Kendall also informed the committee that Clinton’s emails from her time at the State Department have been permanently erased.
a) Do you think Democratic voters should choose Mrs. Clinton as their presidential candidate? or, if she were Republican, do you think Republican voters should vote for her? (Should the revelations about her emails make any difference to voters?) Explain your answer.
b) Should a voter’s opinion be affected by his/her previous support for Mrs. Clinton? Explain your answer.

The Freedom of Information Act (FOIA)

About the U.S. State Department:
The U.S. Department of State advises the President in the formulation and execution of foreign policy and promotes the long-range security and well-being of the U.S.. The Department determines and analyzes the facts relating to American overseas interests, makes recommendations on policy and future action, and takes the necessary steps to carry out established policy. …The Department … negotiates treaties and agreements with foreign nations; speaks for the U.S. in the United Nations and other international organizations in which the U.S. participates; and represents the U.S. at international conferences. (from about.com)

Under the Federal Records Act (law), “the head of each Federal agency shall make and preserve records containing adequate and proper documentation…” (from the U.S. National Archives archives.gov)

Under the Federal Records Act (law), each federal agency is required to make and preserve records that (1) document the organization, functions, policies, decisions, procedures, and essential transactions of the agency and (2) provide the information necessary to protect the legal and financial rights of the government and of persons directly affected by the agency’s activities.

The Act defines a federal record without respect to format.

Records include all books, papers, maps, photographs, machine-readable materials, or other documentary materials, regardless of physical form or characteristics – including email – made or received by an agency of the government under federal law or in connection with the transaction of public business and preserved or appropriate for preservation by that agency as evidence of the organization, functions, policies, decisions, procedures, operations, or other activities of the government or because of the informational value of data in them.

What is the The National Archives and Records Administration (NARA)? Go to: archives.gov/about