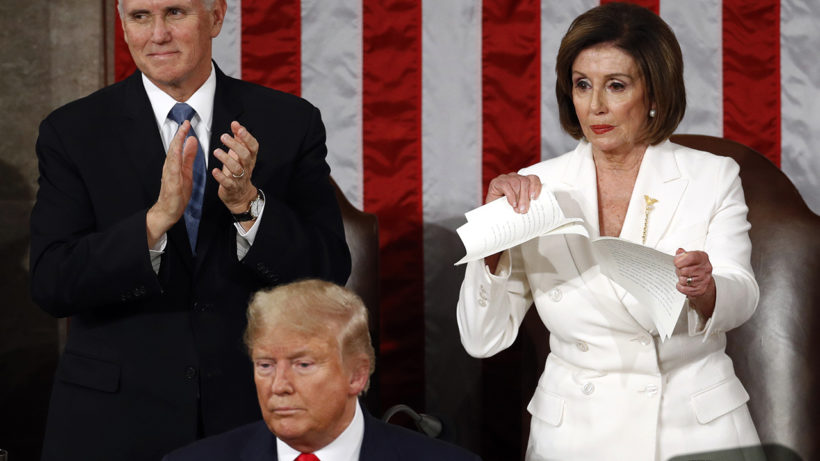 House Speaker Nancy Pelosi of Calif., tears her copy of President Donald Trump's s State of the Union address after he delivered it to a joint session of Congress on Capitol Hill in Washington, Tuesday, Feb. 4, 2020. Vice President Mike Pence is at left. (AP Photo/Patrick Semansky)

(by Andrew Mark Miller, Washington Examiner) – One of President Trump’s guests at the State of the Union called Speaker Nancy Pelosi’s tearing up a paper copy of the commander in chief’s speech “probably the most disrespectful thing I have ever seen in my life.”

“I don’t care how you feel about somebody. That was probably the most disrespectful thing I have ever seen in my life,” Jody Jones, the brother of a man killed by an illegal immigrant, told Fox News. “Because when she did that, it just tore us up. We couldn’t believe it.”

“Felt like she ripped our hearts out. All the guests. We couldn’t believe it,” he added.

Jones’s brother, Rocky Jones, was shot and killed at a California gas station by an illegal immigrant who had been arrested for drunk driving days before. Junior “Gustavo” Garcia-Ruiz had a history of violence and had been deported from the U.S. twice before, according to the Fresno Bee.

“The criminal alien was arrested in December 2018 for the sixth time, but because of California’s sanctuary state policy, he was released from jail,” a White House statement said. 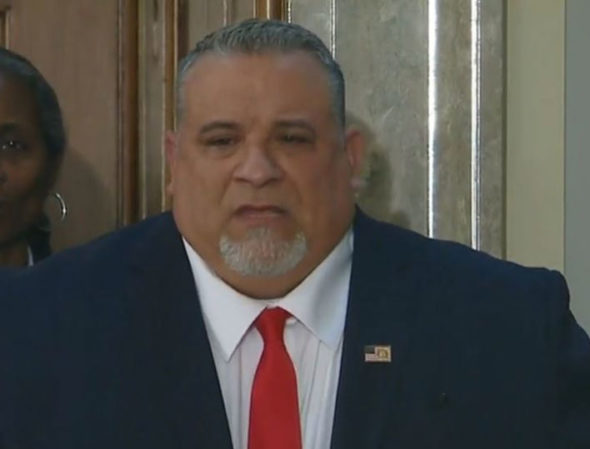 Jody Jones from Farmersville, California received a standing ovation after being mentioned by President Trump during the State of the Union address. The president spoke about Jody’s brother, Rocky, who was murdered in 2018.

Speaker Pelosi, a California Democrat, was…criticized [by Republicans] for ripping up Trump’s speech upon the conclusion of his address.

Vice President Mike Pence referred to her actions as a “new low” for the House.

“There’s always a basic decorum and a basic respect,” he said. “But to have her stand up and tear up that speech really dishonored the moment, and I really thought it was beneath the dignity of a joint session of Congress, and I think it will be remembered as such.”

[Nikki Haley, the former U.S. ambassador to the United Nations, said on Twitter:

“Disappointed to see @SpeakerPelosi rip up the speech that mentioned lives we’ve lost and heroes we celebrated at the SOTU.”

“No matter how you feel or what you disagree with, remember others are watching,” she said. “This was unbecoming of someone at her level in office”].

Not everyone expressed outrage at Pelosi’s actions. The California Democrat received support from members of her own party, including Rep. Alexandria Ocasio-Cortez, who praised the move as “audacious.”

Pelosi said afterward that tearing up the “nasty speech” “was the courteous thing to do, considering the alternative. It was such a dirty speech.”

Fellow Democrats gave her a standing ovation for her remarks (about tearing up the speech, the sources said.].

2. What do you learn from the article about the person who murdered Jody Jones’ brother Rocky?

3. What did Republicans say about Speaker Pelosi’s decision to rip up her copy of President Trump’s State of the Union speech just after he concluded his address?

4. How did Democrats react to Speaker Pelosi’s move?

5. a) Watch the video interview with Jody Jones under “Resources.” What do you think of his anguish over the U.S. Speaker of the House tearing up the President’s speech, which in part detailed the tragedy of his brother’s death, along with the stories of the presidents other invited guests?

b) Democratic Speaker of the House Nancy Pelosi said the president’s State of the Union address was “a pack of lies” and “I thought, ‘You know – he’s selling a bill of goods like a snake oil salesman. We cannot let this – we cannot let this stand,’” as she explained her decision to rip up his speech right behind him just as he concluded.
Conservatives and Republicans said this was very inappropriate, etc. Democrats and progressives/socialists applauded her actions. What do you think of Speaker Pelosi’s actions? (Appropriate? very disrespectful? offensive? she is a leader? she behaved badly? etc.) Please explain your answer.

During his address, President Trump called on lawmakers to support legislation introduced by Republican North Carolina Sen. Thom Tillis, the Justice for Victims of Sanctuary Cities Act, that would allow people like Jones to sue sanctuary cities if a loved one is killed or hurt by such “deadly” policies.

Jonathan Turley, Law Professor at George Washington University (who is a Democrat) in his editorial “Nancy Pelosi should resign” concluded with the following:

Pelosi has demolished decades of tradition with this poorly considered moment. Of course, many will celebrate her conduct and be thrilled by the insult to Trump. However, even those of us who disagree with his policies should consider what Pelosi destroyed in her moment of rage. She shredded the pretense of governing with civility and dignity in the House. Notably, she did not wait to rip up her copy of the speech until after she left the House floor. Pelosi wanted to do it at the end of the speech, in front of the camera, with the president still in the chamber.

That act was more important to Pelosi than preserving the tradition of her office. In doing so, she forfeited the right to occupy that office. If Pelosi cannot maintain the dignity and neutrality of her office at the State of the Union, she should resign as the speaker of the House of Representatives.

(Read another article about Prof Turley, “Democrat Law Professor: It Is Wrong to Impeach Trump Just Because You’re All Mad“)