Democrat Law Professor: It Is Wrong to Impeach Trump Just Because You’re All Mad 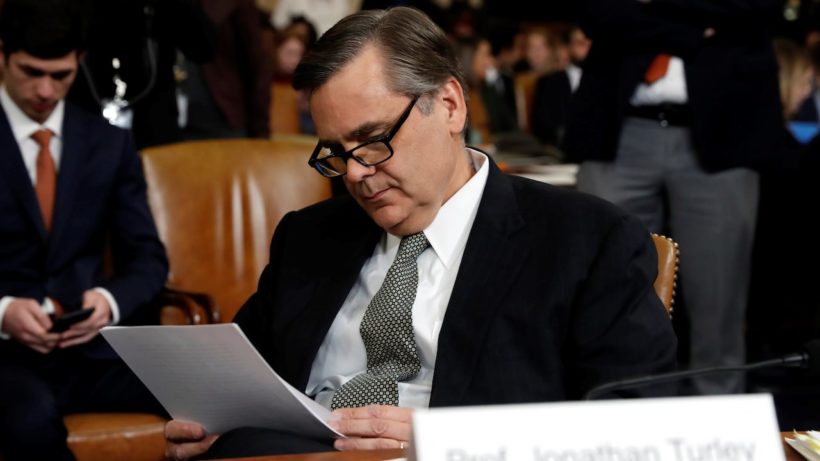 (from UPI) — During the House impeachment hearings on Wednesday, four legal experts were called to testify as to whether President Donald Trump’s refusal to comply with congressional subpoenas in the impeachment inquiry is grounds for an obstruction case.

The Democrats called three of the witnesses, while the Republicans were allowed to call one witness.  All four of the experts are Democrats who do not support President Trump.

Their testimony came one day after House Democrats on the intelligence committee released a report accusing Trump of congressional obstruction based on his instructions for White House staff not to comply with subpoenas.

The witness for the Republicans, George Washington University Law Professor Jonathan Turley, said Democrats’ attempts to go after Trump for fighting the subpoenas in court was a congressional abuse of power.

“President Trump has gone … to the courts,” Turley said. “He’s allowed to do that; we have three branches, not two.

If you impeach a president, if you make a high crime and misdemeanor out of going to the courts, it is an abuse of power. It’s your abuse of power. You are doing precisely what you’re criticizing the president for doing.”

Turley called out Democrats and fellow members of the panel for moving forward with impeachment because “everyone is mad.”

Where has it taken us? Will a slipshod impeachment make us less mad or will it only give an invitation for the madness to follow in every future administration? That is why this is wrong…it’s wrong because this is not how you impeach an American president,” Turley argued, adding that the evidence Democrats are using is severely lacking, the process is rushed and that a number of witnesses haven’t been subpoenaed.

“I am concerned about lowering impeachment standards to fit a paucity [small amount] of evidence and an abundance of anger. If the House proceeds solely on the Ukrainian allegations, this impeachment would stand out among modern impeachments as the shortest proceeding, with the thinnest evidentiary record, and the narrowest grounds ever used to impeach a president. That does not bode well for future presidents who are working in a country often sharply and, at times, bitterly divided,” he said.

Turley isn’t a Republican and voted against President Trump in 2016. He noted in the beginning of his speech:

I would like to start, perhaps incongruously, with a statement of three irrelevant facts. First, I am not a supporter of President Trump. I voted against him in 2016 and I have previously voted for Presidents Clinton and Obama.

Second, I have been highly critical of President Trump, his policies, and his rhetoric, in dozens of columns.

Third, I have repeatedly criticized his raising of the investigation of the Hunter Biden matter with the Ukrainian president.

These points are not meant to curry favor or approval. Rather they are meant to drive home a simple point: one can oppose President Trump’s policies or actions but still conclude that the current legal case for impeachment is not just woefully inadequate, but in some respects, dangerous, as the basis for the impeachment of an American president.

Today, my only concern is the integrity and coherence of the constitutional standard and process of impeachment. President Trump will not be our last president and what we leave in the wake of this scandal will shape our democracy for generations to come.

I am concerned about lowering impeachment standards to fit a paucity of evidence and an abundance of anger.

If the House proceeds solely on the Ukrainian allegations, this impeachment would stand out among modern impeachments as the shortest proceeding, with the thinnest evidentiary record, and the narrowest grounds ever used to impeach a president. That does not bode well for future presidents who are working in a country often sharply and, at times, bitterly divided. …

The three legal and constitutional scholars called by the Democrats, however, each made cases about why impeaching the president was justified.

Compiled from UPI and jonathanturley .com. Reprinted here for educational purposes only. May not be reproduced on other websites without permission.

1. Who is Jonathan Turley? (What are his credentials?)

2. To what political party does Prof. Turley belong?

3. Why does Mr. Turley emphasize the fact that he is not a supporter of President Trump and did not vote for him?

4. Watch the video of Mr. Turley’s statement. What do you think of his remarks? Do you think he is right to be concerned? Explain your answer.

5. Contradicting Turley, the three legal experts (who are also all Democrats) called by the Democrats said impeaching the president was justified. The Democrats want to impeach President Trump over a phone call he had with the President Zalensky of Ukraine.

Read the transcript of the call here.

U.S. Constitution, Article II, section 4 states, “The President, Vice President and all Civil Officers of the United States, shall be removed from Office on Impeachment for, and Conviction of, Treason, Bribery, or other high Crimes and Misdemeanors.”

a) What do you think? Is the phone call grounds for impeachment? Explain your answer.
b) Ask a parent the same question.