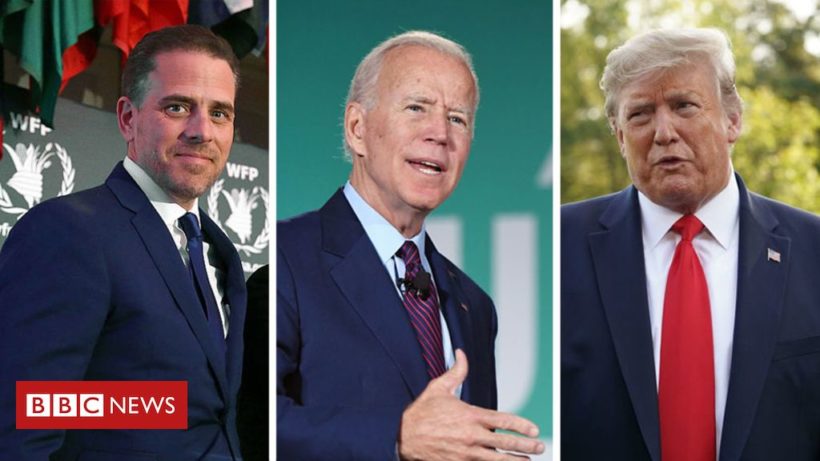 What’s it all about?

An anonymous whistleblower accused President Trump of threatening to withhold military aid to Ukraine unless Ukrainian President Volodymyr Zelensky promised to open a corruption investigation into former VP Joe Biden’s son’s business dealings with a Ukrainian energy company. Watch the two videos below, then read the “Background” before answering the questions.

A September 24 segment from Tucker Carlson:

Read the transcript of the July 2019 coversation between President Trump and the president of Ukraine (pdf): 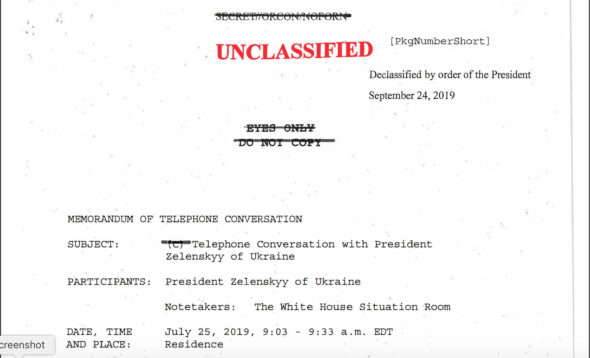 2. For what reasons can a U.S. president be impeached?

3. Why do the Democrats say they want to impeach President Trump?

4. What did President Trump ask Ukrainian President Volodymyr Zelensky to look into?

5. Tucker Carlson (in the second video) supports President Trump – in the same way that almost every other media organization (CNN, MSNBC, ABC, CBS, NBC, NY Times, Washington Post…) oppose President Trump.
a) Do an internet search for “Democrats to impeach Trump” — Are the majority of stories positive, negative or neutral?
b) Whether you like or dislike President Trump personally, or support or oppose his policies, why is it important to learn the facts and consider the truth in this matter of impeachment?

Read the transcript of the July 2019 coversation between President Trump and the president of Ukraine. 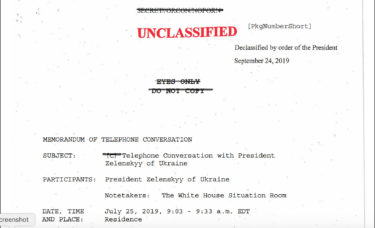 or here: Read the full transcript of President Trump’s conversation with the President of Ukraine

Former CIA official on whistleblower: ‘How could this be an intelligence matter?’

Fred Fleitz, president of the Center for Security Policy, served in 2018 as deputy assistant to the president and to the chief of staff of the National Security Council. He previously held national-security jobs with the CIA, the DIA, the Department of State, and the House Intelligence Committee staff. He remarks on the whistleblower complaint. His commentary below was posted at nypost .com, September 26, 2019

I am troubled by the complaint and wonder how an intelligence officer could file it over something a president said to a foreign leader. How could this be an intelligence matter?

It appears likely to me that this so-called whistleblower was pursuing a political agenda.

I am very familiar with transcripts of presidential phone calls since I edited and processed dozens of them when I worked for the NSC. I also know a lot about intelligence whistleblowers from my time with the CIA.

My suspicions grew this morning when I saw the declassified whistleblowing complaint. It appears to be written by a law professor and includes legal references and detailed footnotes. It also has an unusual legalistic reference on how this complaint should be classified.

From my experience, such an extremely polished whistleblowing complaint is unheard of. This document looks as if this leaker had outside help, possibly from congressional members or staff.

Moreover, it looks like more than a coincidence that this complaint surfaced and was directed to the House Intelligence Committee just after Adam Schiff (D-Calif.), an outspoken opponent of President Trump, expressed numerous complaints in August 2019 accusing President Trump of abusing aid to Ukraine to hurt Joe Biden. This includes an August 28 tweet that closely resembled the whistleblowing complaint.

House Republicans need to ask the whistleblower under oath whether he spoke to the press or Congress about his complaint.

Also very concerning to me is how the complaint indicates intelligence officers and possibly other federal employees are violating the rules governing presidential phone calls with foreign leaders.

The content and transcripts of these calls are highly restricted. The whistleblower makes clear in his complaint that he did not listen to a call in question, nor did he read the transcript — he was told about the call by others. If true, intelligence officers have grossly violated the rules as well as the trust placed on them to protect this sensitive information.

I refuse to believe that the leaking, timing and presentation of this complaint is coincidence. I don’t think the American people will buy this either.

I’m more worried, however, that this latest instance of blatant politicization of intelligence by Trump haters will do long term damage to the relationship between the intelligence community and US presidents for many years to come.

Read about impeachment at house.gov and at Wikipedia.