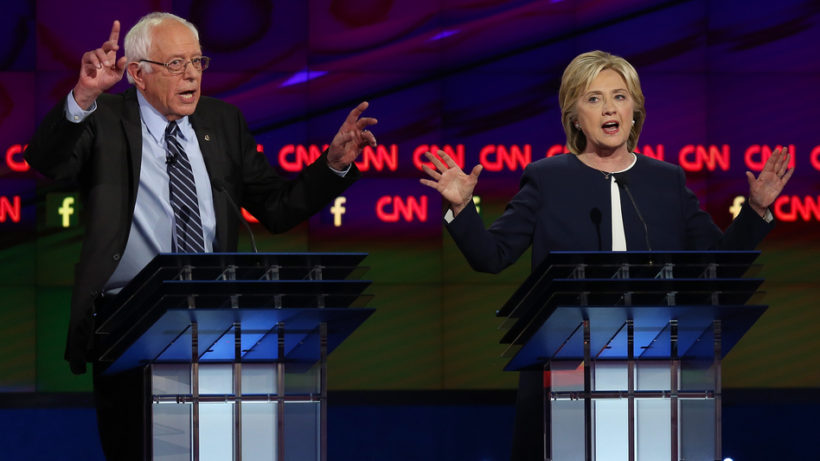 (by Adam Edelman, NY Daily News) – At least a half-dozen Democratic superdelegates in New York State who have already decided to support Hillary Clinton said Tuesday they would maintain their allegiance to her – regardless of the results of New York’s primary.

Even if opponent Bernie Sanders were to win the April 19 New York presidential primary, when a whopping 247 delegates are at stake, every single New York superdelegate reached by the Daily News said they would never back the Vermont senator.

“Absolutely not,” Elizabeth Stanley, the chief of staff for Westchester County Rep. Nita Lowey, told the Daily News when asked if she could see “any potential situation at all” resulting in her boss switching her support from Clinton to Sanders.

“Hillary Clinton is Congresswoman Lowey’s friend, colleague and her constituent, and she is behind her 100%,” Stanley added.

“I would not under any circumstances switch my allegiance from Secretary Clinton to Senator Sanders,” Queens Congressman Gregory Meeks said.

The other four New York superdelegates (of the 8 the Daily News talked to) – who can pledge and withdraw their allegiance to a nominee based on their personal preference – also would never pull their support from Clinton, their spokespeople said. They all spoke anonymously for fear of insulting either campaign.

The offices for another six known New York superdelegates [the News was able to reach] wouldn’t comment or didn’t respond to a request for comment. There are 44 superdelegates among New York’s 291 delegates.

The iron-willed insistence of so many politicians and sitting lawmakers already in the Hillary camp to not budge from their support of the Democratic front-runner speaks volumes to the difficulty faced by the Sanders campaign – or any political outsider – in securing the nomination.

But that challenge – one that is met by candidates every four years – isn’t merely a product of Clinton having earned so many supporters. It’s also due to the complicated setup of a nominating process that gives weight to the desire of party bosses who don’t have to take into account the expressed desire of Democratic voters.

The majority of Democratic delegates in New York, and across the U.S., are “pledged.” Typically they are elected state and local officials. They are awarded proportionally, and bound to the candidate who wins their state’s primary.

Across the U.S., there are 712 [Democratic] superdelegates – unelected delegates free to support any candidate for the Democratic nomination at the party’s convention.

Among New York’s superdelegates this year are Hillary’s husband, former President Bill Clinton, Sens. Kirsten Gillibrand and Chuck Schumer, and most of the state’s House members.

Superdelegates are not involved in the Republican Party nomination process.

To secure the Democratic nomination, either Clinton or Sanders must attain 2,383 total delegates before the party’s national convention in Philadelphia this July.

In spite of Sanders winning 15 states – including some by an 80%-20% margin – over 94% of the 498 superdelegates who have decided thus far have said they are backing Clinton. (Clinton has 469 superdelegate votes, compared to just 29 for Sanders.)

.[Ballotpedia reports: Currently, 4,765 Democratic delegates are expected to be at the Democratic National Convention. In order to win the 2016 Democratic presidential nomination, a candidate must win half – 2,383 delegates – at the national convention].

Currently, Clinton has 1,712, total delegates, compared with 1,004 for Sanders. Excluding superdelegates, however, Clinton’s lead is only 1,243 to 975 – a narrower difference that has prompted the Sanders campaign to say it will try to convince many superdelegates to jump ship and support him.

Despite the uphill battle, Sanders campaign officials said they remain optimistic. “Yes, Hillary Clinton has a substantial lead but there are still hundreds who have yet to make a public declaration of support,” Sanders senior adviser Tad Devine told The News. “We recognize that a lot of them have already made up their mind . . . and we respect that. We just think that if we can do well on the merits, we can get people to do what we feel is the right thing,” Devine added.

A Clinton representative said the campaign has “always said we would work to earn more pledged delegates.” [In other words, they will try to convince more people to vote for her. Pledged delegates must vote for the candidate the people of the state voted for.]

NOTE TO STUDENTS: Read the “Background” below on superdelegates before answering the questions.

1. What is the difference between pledged delegates and superdelegates?

3. When and why did Democrats add superdelegates to their nominating process?

4. a) How did the eight New York superdelegates contacted by the Daily News respond when asked if they would vote for Bernie Sanders should he win the New York primary? Be specific.
b) If you were/are a New York Democratic voter, how would this affect your attitude toward the primary race?

5. If Sen. Sanders has won almost half of the state primaries to date (some by a wide margin), why does Hillary Clinton still have so many more delegates overall?

6. How do the Democratic and Republican procedures for superdelegates differ?

7. The Democratic Party is often criticized during election cycles for conducting primary elections in a non-democratic fashion, since superdelegates are appointed by the party and are not obligated to support the candidate chosen by the voters. There have been repeated calls to eliminate the superdelegates from the primaries to more accurately reflect the popular vote. What do you think? Should the party eliminate superdelegates? Be specific.

Superdelegates are current or former Democratic elected officeholders and party officials. They are free to support any candidate for the nomination.  At the 2016 Democratic National Convention the superdelegates will make up approximately 15% of the total number of delegates.

Early 1970s: The Democratic Party reforms rules to open up the nominating process and create a uniform primary and caucus system that gives more influence to a wider spectrum of voters, including grassroots activists and minorities.

1972: Sen. George McGovern wins the Democratic nomination, but loses the general election in a disastrous landslide: McGovern wins only one state and the District of Columbia.

1982: The Democratic Party reforms rules again, creating superdelegates to give elected party officials more influence in the nomination process. Officials hope the move will help them retain a measure of control in selecting a nominee in sync with the party and viable in general elections.

2008: In another tighter-than-expected race, opponents Hillary Clinton and Barack Obama have waged intense campaigns to secure superdelegates early in an unpredictable contest.

Read an MSNBC article that explains why the superdelegate system was implemented in the Democratic party.

NOTE: The Republicans do not have a similar super-delegate system.

View a “Number of Delegates to the Convention” chart