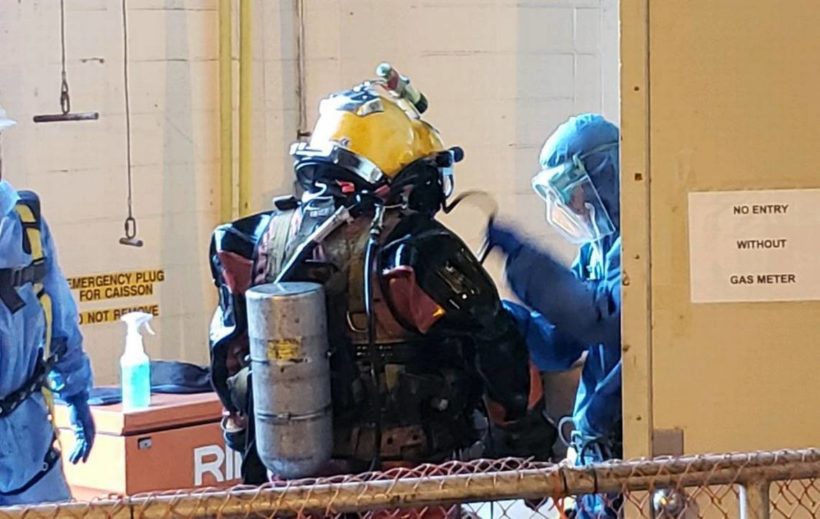 Divers preparing to clear out the clog at the Charleston Water Treatment plant.

Crews worked 24/7 to get those wipes out of the system. Three days later, the pumps were back to normal. WCIV reports thousands of pounds of baby wipes were collected.

“…We sent divers 80-90 feet deep into the wet well/raw sewage to search in complete darkness with their hands to find and identify the obstruction. As we expected, they came up with these large masses of wipes in their first two loads, with more to come,” Charleston Water tweeted.

One official told the Charleston Post and Courier that other items…contributed to the [giant clog] but wipes are a huge portion of the problem. (In addition, crews also found a baseball and a large piece of metal.)

“Don’t flush stuff like this. Joking of course, but you should only flush #1, #2, and toilet paper,” CWS officials said. “It boils down to the fact that ‘flushable’ wipes simply are not flushable, they may degrade overtime and they may go down your toilet, but they certainly will block up the plumbing in your home, and wreak a lot of havoc in our system, so we would really appreciate any change that people could make,” he said.

When pipes were backed up last Thursday, Charleston Water System hired three divers to collect thousands of pounds of baby wipes over a three-day span.

The wipes are now set aside to dry out before being placed in a wasteland.

Utility officials want people to throw wipes where they belong: in the trash headed to the landfill. Only nonwoven, biodegradable wipes break down in water, like toilet paper. Most commercial brands are woven, more like cloth than tissue.

Clogs in homeowner plumbing as well as sewer lines have gotten so prevalent that at least one New York-based law firm, Robbins Geller, launched a class-action lawsuit against misleading claims from the “flushable” industry.

The wipes industry is expected to sell $2.7 billion in products by 2020, up from $796 million in 2010, despite a gradual shift in the market toward nonwoven alternatives, according to a recent report…

Compiled from reports at WDSU, ABCNews4, Live5News, Post and Courier.

1. What was the main cause of the clog to a water treatment plant in Charleston, South Carolina last week?

2. How long did it take crews to clean out the system?

3. How did Mike Saia of the Charleston Water System explain the problem?

4. What are utility officials asking customers to do? Why?

5. How are the wipes being disposed of?

6. From para. 13, 12: The wipes industry is expected to sell $2.7 billion in products by 2020. Clogs in homeowner plumbing as well as sewer lines have gotten so prevalent that at least one law firm launched a class-action lawsuit against misleading claims from the “flushable” industry.
The clogs prove the wipes are not flushable. What action do you think should be taken against the companies? What responsibility do the companies have to alert all customers they are not flushable after they have advertised them as being so?

When the Plum Island pumps clogged, four sewer mains backed up in four neighborhoods in Charleston. The problem, weirdly enough, stemmed from Hurricane Michael rains the Charleston area never got.

Charleston Water System routinely brings down the flow in its sewer pipes to prepare for the onslaught of flood rain through the system. When the rain didn’t come, pumps moving the remaining flow apparently pulled along clots of disposables lining the bottom of the sewer pipes.

“It blanketed the suction inlets at Plum Island,” Fairey said.

About a ton of the stuff per day is pulled from Charleston Water System.

Officials couldn’t immediately say what it costs to clean out per year. In 2014, it was estimated at $180,000. (from postandcourier)