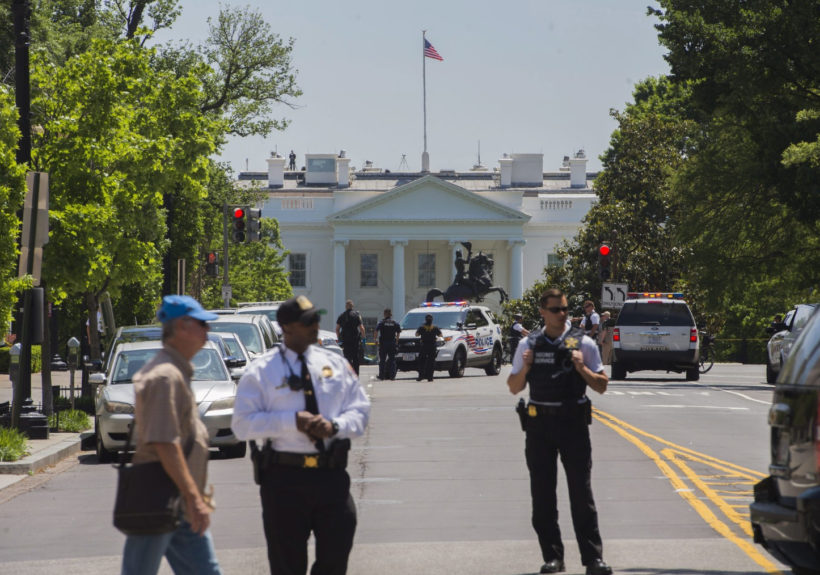 Secret Service officers set up a roadblock near the White House after they stopped a man who was flying a drone at a nearby park. (Photo: Shawn Thew/European Pressphoto Agency)

(by Michael S. Schmidt, The NY Times) WASHINGTON — The Secret Service arrested a man who was flying a small drone less than a block from the White House on Thursday afternoon, law enforcement officials said.

It was the second time in five months that the Secret Service had found a drone flying near the White House, highlighting the difficulty the agency faces in protecting the president’s residence. [Drones are hard to detect by radar because they fly at low altitudes.]

About 1 p.m., Secret Service uniformed officers saw a drone flying roughly 100 feet above Lafayette Park, across the street from the White House, the authorities said.

The man flying the drone complied with officers’ commands to land it, and he was arrested, they said. It is not clear whether the man intended to fly the drone over the White House.

The officers then cordoned off the area in Lafayette Park where the drone had landed in order to determine whether there were any explosives or anything else potentially harmful on the drone. They concluded that it was safe, the authorities said. The Secret Service did not identify the man, but said that he had been turned over to the United States Park Police, which has jurisdiction over the park. It is illegal to fly a drone in Washington.

The episode occurred a day after the Federal Aviation Administration began a public outreach campaign to tell tourists visiting Washington this summer to “Leave Your Drone at Home.”

“Rules put in place after the 9/11 attacks establish ‘national defense airspace’ over the D.C. area and limit aircraft operations — including unmanned aircraft — to those with an F.A.A. and Transportation Security Administration authorization,” the F.A.A. said in a news release. “Violators may face stiff fines and criminal penalties.”

It added: “The bottom line: Enjoy your visit to the nation’s capital. Bring your family, your cameras and plenty of sunscreen. Just don’t bring your drone.”

In January, a small drone being flown by a government employee crashed on the South Lawn of the White House around 3 a.m. Specially designed radar did not detect the drone flying near or over the president’s residence.

“This is still something we haven’t solved and we still haven’t figured out how to protect airspace” said Lisa Ellman, who helps lead the unmanned aircraft systems practice group at the law firm McKenna, Long & Aldridge in Washington.

Reprinted here for educational purposes only. May not be reproduced on other websites without permission from The New York Tmes. Visit the website at nytimes .com.

2. Where exactly was the man flying his drone?

3. Why did the Secret Service turn the man over to the U.S. Park Police?

4. It is not illegal to own/fly a drone in the U.S. Why was the man arrested?

5. The drone incident Thursday occurred a day after the FAA began a public outreach campaign to tell tourists visiting Washington this summer to “Leave Your Drone at Home.” What do you think of the FAA’s campaign to warn tourists not to bring their drones to Washington?

6. Drones are used for businesses including farming, movie-making and real estate.
a) Do you think the security risks posed by individuals’ use of drones outweighs the benefit businesses gain from using drones in their work? (Risks could include the possibility of a drone operator flying a drone over a crowd accidentally crashing his drone or even the potential for terrorists packing a small drone with potentially harmful material. Are either of these scenarios realistic?) Explain your answer.
b) Ask a parent the same question.

7. a) If drone use was unrestricted in your state, would the number of people operating drones make a difference to you? (If 1% of your neighbors, or 10% or 50% operated their drones in your neighborhood, would you oppose your state regulating drone use?) Explain your answer.
b) Ask a parent the same question.