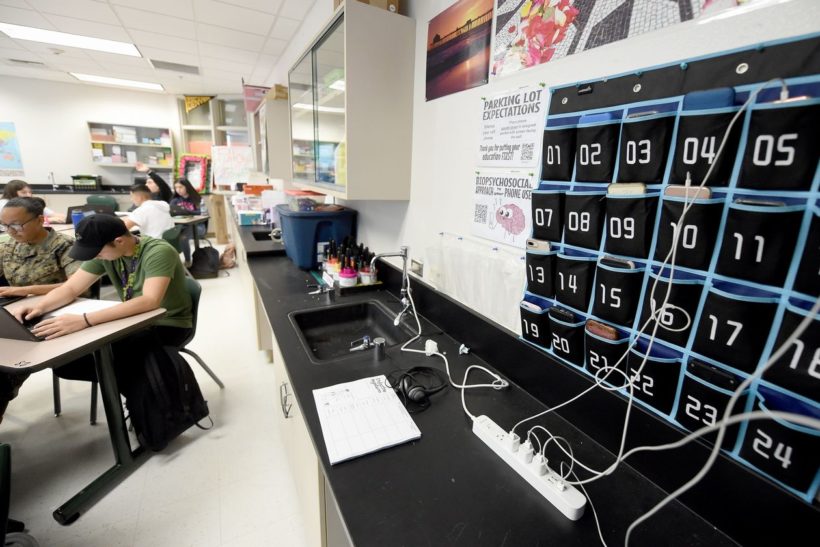 (by Sarah Krouse, The Wall Street Journal) – Before class each day, a high-school teacher in Indianapolis grabs a clear plastic bag and fastens it to her waist with a ribbon. The homemade pouch is a repository for phones that are either confiscated or handed over voluntarily by students who don’t want to be tempted to tap or swipe during class.

She calls it the “phoney pack,” and the magic of the makeshift vault isn’t that it keeps devices out of reach. It’s that it lowers students’ anxiety by keeping their phones in view.

Smartphones have long been a scourge for teachers and administrators, who have employed a range of strict measures to keep them out of the classroom. But it turns out that getting rid of phones introduced another distraction: withdrawal pangs.

Now, teachers across the country are testing their own methods for managing their students’ phone-related angst:

Students don’t always appreciate the efforts to appease them. 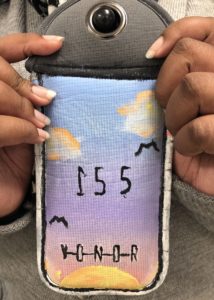 South Bronx Early College Academy Charter School in New York decided two years ago that making students leave their phones in their lockers wasn’t working: [Some] sneaked out of class to use them. So the school bought a bunch of locking, foamlike pouches from a company called Yondr that also markets its devices to theaters that want to prevent audience members from filming performances. The students can keep their phones with them but can’t access them without a special magnetic unlocking mechanism. …

During the first few weeks, students were “fiending” while waiting in line at the end of the day for the teacher to unlock their pouches, principal Brian Blough says.

Eighth-grader Olamide Oladitan and some of his fellow students tried to pry and cut open their pouches with objects like pens and scissors. “It didn’t work,” Mr. Oladitan said,…[admitting] he eventually gave in. “I didn’t like it because I really wanted to get to my phone,” he says, “but at the same time I didn’t hate it because it helped me get better grades.”

Some schools have opted for the carrot over the stick. At High Point Academy Fort Worth in Texas, students in Jayne Lawrence’s English and creative writing classes download an app called Pocket Points that tracks when they touch their phones. Students can redeem points for different tiers of awards that kick in at 10, 15 and 24 class hours off the phone, earning prizes ranging from a drink at Starbucks to the ability to drop their worst test score.

Ms. Lawrence says the system is worth it because it gives her a way to combat students’ addiction without confrontation.

“The quickest way here to burn a relationship is to take something from them,” she says.

When Joseph Riffle’s school in Fairborn, Ohio, allowed teachers to set their own rules on devices, he realized his policy of letting kids keep phones on their desks as long as they didn’t use them was just too tempting. He also knew he couldn’t take the phones too far, considering they’re the most expensive thing some of the students own.

So the 32-year-old teacher purchased boxes with USB plugs on Amazon and set up a table near the front of his class where his sophomore American Studies students could charge their devices—and gaze at them from a distance. The expectation was “you turn in and you plug in,” he says.

The charging system worked for about three years until the school required phones to be put away all day.

Some schools say confiscating devices at the start of each day is the only way to block all phone-related distractions and others threaten to put students’ phones in a locked “cell block,” hoping the fear of loss will lead to compliance.

Parents at Roosevelt High School in Seattle sent administrators dozens of thank-you notes and emails in 2018 when they announced the school would require cellphones to be put away in a bag or locker for the day. The school had previously allowed individual teachers to set their own rules. …

When DREAM Charter High School in New York opened three years ago, teachers collected its roughly 100 students’ phones in homeroom each day, a task that became unwieldy as the school’s population grew to 300.

DREAM now uses a “Harry Potter-like” system that allows students to earn points that give them privileges such as being able to hold on to their phone rather than having to lock them in a Yondr pouch, principal Jared Francis says. Students earn credit for good grades and actions such as persisting through challenges that help them achieve “prefect status,” a reference to the Hogwarts students who earn special privileges.

Mr. Francis says the school’s policy is aimed at teaching responsibility. “In the real world no one is confiscating my phone, but I use it a lot and I have to learn how to manage that,” he says.

Published at wsj .com on January 20. Reprinted here for educational purposes only. May not be reproduced on other websites without permission from The Wall Street Journal.

1. a) What is a school’s purpose for prohibiting students from keeping their phones in class?
b) What is the unintended consequence of taking students’ phones during class? (Describe the irony.)

2. Teachers try different ways to eliminate students’ stress over being parted from their phones. List three policies teachers have used.

3. How are students reacting? – Why did student Olamide Oladitan change his mind about his school’s use of Yondr pouches?

4. What do you think of Fort Worth teacher Jayne Lawrence’s approach of rewarding students who are able to use self-control?

5. How did parents from Roosevelt High School in Seattle react to the new school-wide policy?

6. Consider and answer the following questions: