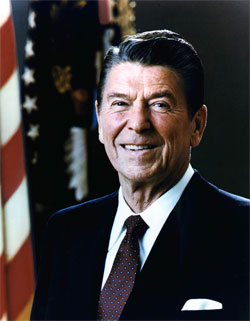 (by Richard Simon, LATimes.com) WASHINGTON, DC – Ronald Reagan admirers wanted to go all out to celebrate the 100th anniversary of the former president’s birth on Feb. 6 – a fighter jet flyover, a 21-gun salute and a Beach Boys performance are among the commemorations. But the Great Communicator’s centennial birthday conflict[ed] with another great American mega-event: Super Bowl Sunday.

Yet Reaganites, true to the Gipper’s attitude, saw an opportunity.

Just before kickoff, a tribute to Reagan [was] displayed on the massive Jumbotron at Cowboys Stadium in Texas, perhaps fitting for this larger-than-life persona. [Watch the video here.]

It [was] one of the scores of centennial events planned through the year for Reagan – from his birthplace in Tampico, Ill. to his final resting place in Simi Valley [California] – in a celebration that has taken on greater significance after Republican gains in Congress.

Although many of the events are being organized by or with help of the Ronald Reagan Presidential Foundation, activities large and small are being planned by others, including GOP clubs, former Reagan aides and admirers of the only former California governor to be elected president

In Valparaiso, Ind., Chuck Williams, a Board of Public Works member and former county GOP chairman, was so fond of the former president that he named his daughter Reagan. Now, he’s seeking to name a street in town after him.

“He was an inspirational president,” Williams said. “We’ve got Roosevelt Road. We’ve got Garfield Boulevard. We’ve got Lincoln Way.” Why not Ronald Reagan Parkway, he asked.

Congress created a bipartisan Reagan Centennial Commission to help plan events, but no federal funding was provided. Sen. Tom Coburn (R-Okla.) didn’t believe such spending would be very Reagan-like. Instead, many celebrations are privately funded.

“The centennial celebration is about more than just one day and one man,” said John Heubusch, the Reagan foundation’s executive director. “It’s a yearlong historic occasion for people to remember an extraordinary man who restored pride in America and spread freedom throughout the world.”

The Reagan foundation plans a concert at the Reagan library featuring, among others, the Beach Boys, who were banned from the capital’s 1983 Fourth of July celebration by Interior Secretary James G. Watt, angering Nancy Reagan. Watt said the group attracted the “wrong element” but changed his tune after the president and Mrs. Reagan made it clear that they liked the Beach Boys.

The former first lady, 89, is expected to attend a number of the centennial events.

Some are designed to familiarize a younger generation with the Reagan story.

Indiana has invited fourth- through 12th-graders to submit a 500-word essay that answers the question: “What is Ronald Reagan’s most important contribution to American history?” The winner will read the essay at a statehouse ceremony. Seminars about Reagan are planned at universities.

“I’m 27 years old, and I barely remember the Reagan era,” said Jay Kenworthy, a spokesman for Lt. Gov. Becky Skillman, who is coordinating Indiana events. “I think there’s a lot of young adults and kids who aren’t necessarily sure what happened in that time in history.”

The Chicago Cubs are planning Reagan Day at Wrigley Field, in which his son, Michael, will throw out a ceremonial first pitch. In the 1930s Reagan re-created Cubs radio broadcasts from descriptions provided by Western Union.

Dinners will be served in his honor, including one in Maryland featuring favorite Reagan dishes prepared by a former Century Plaza Hotel chef who served the first couple. Among the menu items: “Prune Whip,” described as one of Reagan’s many favorite desserts.

Though Reagan died in 2004, his legacy endures in a big way.

At the Capitol, lawmakers from both parties regularly invoke his name – positively and negatively. President Obama took Lou Cannon’s book, “President Reagan: The Role of a Lifetime” on his recent vacation. And the candidates for Republican National Committee chairman were asked during a recent debate: “Aside from President Reagan, who is your political hero?” …..

…In some quarters, festivities have become worthy of Reagan’s Hollywood. Before a national television audience of millions, a Reagan-themed float glided down the Rose Parade route New Year’s morning.

On [January 28th], current and retired Republican members of Congress elected in the 1980 Reagan landslide gathered at the Reagan library with GOP members of the recently elected class of 2010. On the actual centennial weekend of Feb. 4-7, events at the Reagan library [included] the jet flyover, the howitzer salute, a wreath-laying at the former president’s burial site, the concert and ribbon-cutting of a $15-million makeover of the Reagan museum.

A Washington gala is planned in May – at the Ronald Reagan Building and International Trade Center, a massive government building ironically named after a critic of big government.

The National Archives is displaying rarely seen items from Reagan’s life, including his 1983 speech in which he called the Soviet Union an “evil empire,” with his handwritten editing.

Some Reagan admirers are finding more personal ways to mark the occasion.

In Grayslake, Ill., John Tenuto and his wife, both sociology professors, and their 8-year-old son are watching one Reagan movie per week for the year and blogging their thoughts at reaganrecord.com. After watching “Bedtime for Bonzo,” Tenuto wrote: “When a reporter asked President Ronald Reagan to sign a photo of him from the movie featuring his character and Bonzo, Reagan gladly did so, and signed ‘I’m the one with the watch.’ “

1. How was the anniversary of President Ronald Reagan’s 100 birthday celebrated at the Superbowl?

2. How are most events planned by the Reagan Centennial Commission in honor of Ronald Reagan’s 100th birthday being funded?

3. What is President Reagan known for, according to John Heubusch, the Reagan foundation’s executive director?

5. a) Watch the tribute video to President Reagan from the Reagan foundation’s youtube website at youtube.com/user/ReaganFoundation#p/a/u/0/ZJGQti2Osnc.
b) Ask a parent about his/her view of Reagan as president, and to explain why he/she holds that opinion.
c) Ask a grandparent the same question.

At the end of his two terms in office, Ronald Reagan viewed with satisfaction the achievements of his innovative program known as the Reagan Revolution, which aimed to reinvigorate the American people and reduce their reliance upon Government. He felt he had fulfilled his campaign pledge of 1980 to restore “the great, confident roar of American progress and growth and optimism.”

On February 6, 1911, Ronald Wilson Reagan was born to Nelle and John Reagan in Tampico, Illinois. He attended high school in nearby Dixon and then worked his way through Eureka College. There, he studied economics and sociology, played on the football team, and acted in school plays. Upon graduation, he became a radio sports announcer. A screen test in 1937 won him a contract in Hollywood. During the next two decades he appeared in 53 films.

From his first marriage to actress Jane Wyman, he had two children, Maureen and Michael. Maureen passed away in 2001. In 1952 he married Nancy Davis, who was also an actress, and they had two children, Patricia Ann and Ronald Prescott.

As president of the Screen Actors Guild, Reagan became embroiled in disputes over the issue of Communism in the film industry; his political views shifted from liberal to conservative. He toured the country as a television host, becoming a spokesman for conservatism. In 1966 he was elected Governor of California by a margin of a million votes; he was re-elected in 1970.

Ronald Reagan won the Republican Presidential nomination in 1980 and chose as his running mate former Texas Congressman and United Nations Ambassador George Bush. Voters troubled by inflation and by the year-long confinement of Americans in Iran swept the Republican ticket into office. Reagan won 489 electoral votes to 49 for President Jimmy Carter.

On January 20, 1981, Reagan took office. Only 69 days later he was shot by a would-be assassin, but quickly recovered and returned to duty. His grace and wit during the dangerous incident caused his popularity to soar.

Dealing skillfully with Congress, Reagan obtained legislation to stimulate economic growth, curb inflation, increase employment, and strengthen national defense. He embarked upon a course of cutting taxes and Government expenditures, refusing to deviate from it when the strengthening of defense forces led to a large deficit.

A renewal of national self-confidence by 1984 helped Reagan and Bush win a second term with an unprecedented number of electoral votes. Their victory turned away Democratic challengers Walter F. Mondale and Geraldine Ferraro.

In 1986 Reagan obtained an overhaul of the income tax code, which eliminated many deductions and exempted millions of people with low incomes. At the end of his administration, the Nation was enjoying its longest recorded period of peacetime prosperity without recession or depression.

In foreign policy, Reagan sought to achieve “peace through strength.” During his two terms he increased defense spending 35 percent, but sought to improve relations with the Soviet Union. In dramatic meetings with Soviet leader Mikhail Gorbachev, he negotiated a treaty that would eliminate intermediate-range nuclear missiles. Reagan declared war against international terrorism, sending American bombers against Libya after evidence came out that Libya was involved in an attack on American soldiers in a West Berlin nightclub.

By ordering naval escorts in the Persian Gulf, he maintained the free flow of oil during the Iran-Iraq war. In keeping with the Reagan Doctrine, he gave support to anti-Communist insurgencies in Central America, Asia, and Africa.

Overall, the Reagan years saw a restoration of prosperity, and the goal of peace through strength seemed to be within grasp.

Visit the website for the Ronald Reagan Presidential Library in Simi Valley, California at reaganlibrary.com.

Visit the website for the Ronald Reagan boyhood home in Dixon, Illinios at ronaldreaganhome.com.

Read a commentary “Three Qualities That Made Reagan Great” at wsj.com.

Consider reading a book about Ronald Reagan. Read about a few below: