Republicans push demand for a vote on Iran nuclear deal 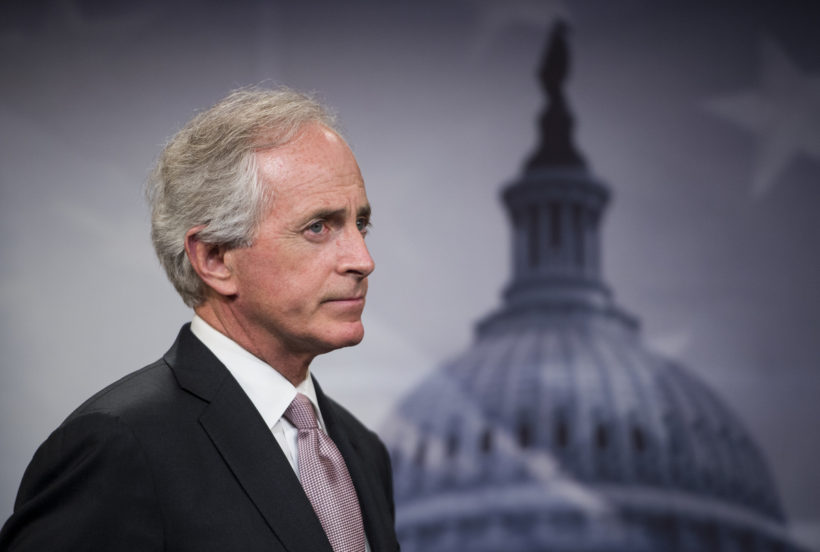 Any nuclear deal with Iran needs to be approved by the Senate, Corker said. (Bill Clark/CQ Roll Call File Photo)

(by Warren Strobel, Reuters) – Senate Republicans on Sunday pressed their demand that Congress be allowed to vote on a nuclear agreement with Iran, but signaled they are willing to wait for last week’s interim agreement to be finalized before passing judgment.

“Look, the president needs to sell this to the American people, and Congress needs to be involved,” said Senator Bob Corker, chairman of the Senate Foreign Relations Committee.

Corker did not condemn the framework deal reached by Iran and major powers in Switzerland on Thursday after months of negotiations, but he cited concerns over inspection provisions and differing accounts from Washington and Tehran over what was actually agreed.

The Tennessee Republican said his committee will go ahead with a planned April 14 vote on legislation requiring President Obama to submit a final nuclear agreement to Congress for review and approval. The deal reached last Thursday is supposed to be the framework for a final agreement to be struck by the end of June.

The bill, supported by both Republicans and many Democrats, would prohibit President Obama from suspending sanctions on Iran during a 60-day congressional review. In that period, Congress could approve or disapprove the agreement, or take no action.

Sen. Corker told Fox News on Sunday that he had backing from key Democrats for the bill, including New York Senator Chuck Schumer, a prominent Jewish lawmaker who is line to be the new Senate Democratic leader in early 2017. Israel has been strongly critical of the nuclear deal.

Corker acknowledged he did not know if backers of the legislation in the Senate would have the 67 votes needed to override an expected veto by Obama, who says passing the measure would undermine the negotiations with Iran.

In an interview with the New York Times published on Sunday, Obama … [said] “…my hope is that we can find something that allows Congress to express itself but does not encroach on traditional presidential prerogatives – and ensures that, if in fact we get a good deal, that we can go ahead and implement it.”

With Republicans mostly united on the issue, and some [strongly opposing] the deal, the key role likely will be played by lawmakers from Obama’s Democratic Party.

Many do not trust Iran and fear the verification measures [that Iran has stopped its nuclear weapons program] are not adequate. They face energetic lobbying by Israel, whose prime minister, Benyamin Netanyahu, says the deal as currently configured threatens his country’s security. [Most people share this concern with Prime Minister Netanyahu.]

While many Democrats are skeptical of Iran, they may be unwilling to hand the U.S. president a major foreign policy defeat.

“Wavering Senate Democrats have been [wary/cautious about possible dangers with] the deal reached in Switzerland,” said Daniel Harsha, a former Democratic staffer on the House Foreign Affairs Committee.

Until the agreement is finalized and Secretary of State John Kerry testifies about it on Capitol Hill, “you aren’t likely to see many Senate Democrats, even those who have publicly backed new sanctions legislation … publicly pan [criticize] the agreement,” said Harsha, now at Harvard University’s Kennedy School.

The agreement reached in Lausanne, Switzerland, would ease economic sanctions on Tehran in return for strict limits on [not elimination of] its nuclear sites, centrifuges that can enrich uranium and enriched uranium stockpiles [all of which are used to make nuclear weapons].

2. a) Who is Bob Corker?
b) What does he say President Obama needs to do about his agreement with Iran over its nuclear weapons program?

3. What concerns did Sen. Corker convey about the framework deal made between the U.S. and Iran?

4. What would the law being voted on in the Senate Foreign Relations Committee do?

5. a) Why do supporters need 67 votes to pass the bill?
b) CHALLENGE: Where in the constitution is this stipulated?

6. The deal the Obama administration has worked out with Iran would allow that regime to eventually obtain nuclear weapons. Why might some Democrats who also oppose the deal not vote against it?

More from the Reuters article above:

If the final agreement with Iran is flawed, they argued, it would be better to keep in place an initial interim deal reached with Iran in November 2013, which contains limits on Tehran’s ability to enrich uranium that could be used for a nuclear weapon. All sides believe that is being observed.

“That’s one way of looking at this program – keeping the interim deal in place that’s been fairly successful, and have a new crack at it with a new president,” Graham said on CBS’ Face the Nation program.

Even if this strategy were adopted by the United States, however, it was unclear how it would play with the five other powers engaged in the negotiations with Iran – Britain, China, France, Germany and Russia.