(by Mohammed Daraghmeh, SignOnSanDiego.com) RAMALLAH, West Bank (AP) – The Palestinian president met Saturday with his rivals in the Hamas militant* group in an attempt to end nearly four years of infighting that has complicated the quest for a Palestinian state. [*NOTE: Militants have been closely associated with extremism and sometimes even terrorism historically, due to the fact that they are closely linked with violent activities. (per wisegeek)]

With the collapse of peace talks with Israel, Palestinian President Mahmoud Abbas and his Western-backed government [Fatah] have turned their attention to reconciling with the Iranian-backed Hamas movement that ousted his forces from the Gaza Strip in 2007 and left him governing only in the West Bank. Palestinians seek both territories for their nation.

Hamas and other Gaza militants oppose peace with Israel and have over the past week rained rockets and mortar fire down on Israeli communities across the border. No one has been killed [thus far], but Israel for the first time deployed parts of an anti-rocket shield under development called the “Iron Dome.” Two more rockets were fired Saturday, spraying an Israeli home with shrapnel (see photo below).

Years of on-and-off talks between Hamas and Abbas’ Fatah movement have produced many false starts. Even mediation by Egypt, before the uprising that ousted President Hosni Mubarak, failed to bring about a breakthrough.

Saturday’s meeting in the West Bank – the first to involve Abbas in a year – [was an attempt] to arrange a trip by Abbas to Hamas-ruled Gaza for more talks. He has not set foot in the territory since the Hamas takeover.

Senior Fatah official Azzam al-Ahmed said the meeting was a positive discussion but no headway was made in setting Abbas’ Gaza visit.

“We hope that all the obstacles will be removed. The most important thing is to get to a practical result, which won’t happen before the president’s arrival to Gaza,” he said.

Ayman Hussein of the Hamas delegation told The Associated Press that Abbas said he wants one government to rule both the West Bank and Gaza [as it did until Hamas violently ousted Fatah from Gaza] and that a date needs to be set for Palestinian elections, which have had to be delayed because of the division.

Abbas has previously said elections would be held in September but only if a deal is reached to allow the participation of Gaza. Hamas has said it would boycott the election.

Palestinians in both the West Bank and Gaza took to the streets earlier this month calling on their governments to reconcile.

Without unity, Palestinian statehood and a peace agreement with Israel will be even harder to achieve. Talks between Israel and Abbas’ Palestinian Authority collapsed last year because of disputes over Israeli construction in the West Bank.

If a unity deal is reached [between Hamas and Fatah], independent [managers] approved by both sides would be appointed to temporarily govern the West Bank and Gaza until national elections. The winner would lead a united Palestinian Authority.

However, Abbas has not revealed what his plan for a unified Palestinian Authority would look like in practical terms, and the level of [bitter hostility] between the sides significantly dims prospects for a deal. 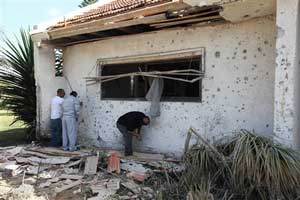 Smaller militant groups in Gaza, however, have continued to lob rockets over the border, drawing Israeli airstrikes and shelling. And violence escalated last Saturday, when Gaza militants fired more than 50 mortar shells into southern Israel. Hamas took responsibility for some of the shelling.

Photo on right: An Israeli man inspects a damaged house hit by a rocket fired by Palestinian militants from the Gaza Strip, Saturday, March 26, 2011.

Hamas spokesman Ismail Radwan said Saturday that his group would end rocket attacks if Israel stops its strikes. The Israeli military would not comment.

Daniel Estrin contributed to this report from Jerusalem.

** NOTE: Brackets [] are used in this article to add corrections and/or explanations that were not in the original text but have been added by the editors.

3. How does Hamas view the peace process with Israel?

4. What do average Palestinians want Fatah and Hamas to do?

6. Paragraph 16 states: “Hamas and Israel have largely stuck to a truce since a punishing Israeli offensive in the Gaza in early 2009.”
In paragraph 17 we read: “Violence escalated last Saturday, when Gaza militants fired more than 50 mortar shells into southern Israel. Hamas took responsibility for some of the shelling.” And in paragraph 18: “Hamas spokesman Ismail Radwan said Saturday that his group would end rocket attacks if Israel stops its strikes.”
The Israeli strikes are aimed at stopping the Hamas rocket attacks. What solution do you see to this problem?

Hamas is a Palestinian Sunni Islamist terrorist organization that currently (since January 2006) forms the majority party of the Palestinian Authority…. Hamas is known outside the Palestinian territories for its suicide bombings and other attacks directed against Israeli civilians, as well as military and security forces targets. Hamas’ charter…calls for the destruction of the State of Israel and its replacement with a Palestinian Islamic state in the area that is now Israel, the West Bank, and the Gaza Strip……In January 2006, Hamas won a surprise victory in the Palestinian parliamentary elections….  Many [Palestinians] perceived the preceding Fatah government as corrupt and ineffective…  Since Hamas has taken control, the Palestinian territories have experienced a period of sharp internal conflicts, known as Fauda (anarchy), in which many Palestinians have been killed in…fighting [between Hamas supporters and Fatah supporters]. (from Wikipedia.org)

ON THE ISRAELI-HAMAS CONFLICT: (most of this information is from wikipedia.org posted 1/2009)

THE SIZE OF THE GAZA STRIP:
25 miles long and 6.2 miles wide
Comparison: slightly more than twice the size of Washington, DC
Population: 1.5 million

Read an additional article “Abbas would give up US aid to reconcile with Hamas” at jpost.com/MiddleEast/Article.aspx?id=214180.

Read about the Gaza Strip at the CIA World FactBook website. 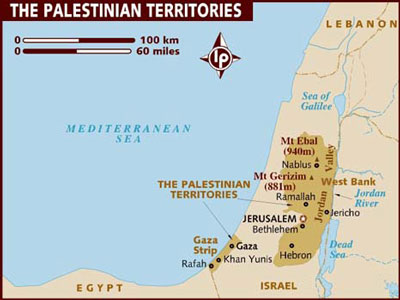