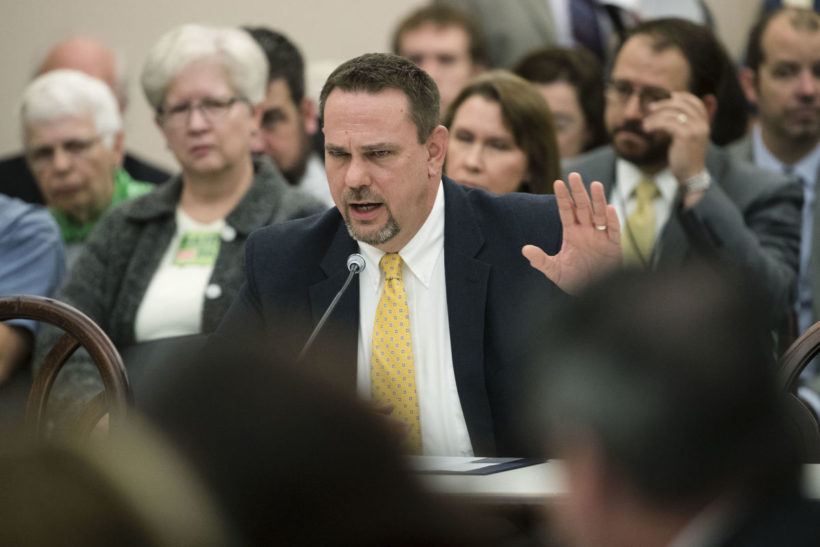 Pennsylvania Department of State official, Jonathan Marks, testifies before the House State Government Committee in Harrisburg Wednesday, October 25. (Photo: Associated Press)
The state has previously acknowledged that noncitizen immigrants can inadvertently register to vote because of a glitch in the design of Pennsylvania’s electronic driver’s licensing system. That glitch has existed since the start of the state’s motor voter system, Marks said, which was first authorized in 1995.
The Department of State divulged the figures under pressure from Republican state lawmakers. Marks said the department has not yet determined how many other noncitizen immigrants remain registered to vote in Pennsylvania.

(by Chris Brennan, The Inquirer philly.com) – Some of Pennsylvania’s 8.4 million registered voters will cast ballots in Tuesday’s general election.

How many of those registrations are held by immigrants in this country legally but ineligible to vote because they are not U.S. citizens?

The Pennsylvania Department of State either does not know or will not say.

It’s been six weeks since Philadelphia City Commissioner Al Schmidt went public with a problem: Since 2006, 317 Philadelphians canceled their registrations after realizing they were not eligible to vote because they are foreign citizens.

The Pennsylvania Department of State then announced it had records showing 1,160 voter registration cancellations statewide since 1972 for the same reason.

That prompts three questions: How did this happen? How many illegal registrations for foreign citizens are still on the books? And how do we fix this?

For answers, we are two for three.

The problem was born in PennDot [Department of Transportation] offices, where noncitizens who can legally obtain drivers licenses were also asked if they wanted to register to vote. The question created confusion, causing some to register.

So far, we only know about the people who raised their hands about the problem. But each of the voter registrations that came via PennDot should be marked with an “INS indicator,” which notes their immigration status.

Schmidt says he first met with Department of State officials in July — 15 weeks ago — to discuss the problem. The Department of State says it started changing the way PennDot asks registration questions in August 2016 — 14 months ago — after first reviewing the system in September 2015 — more than two years ago.

By now, you would think the department would have identified all of the voter registrations tagged with INS indicators.

Either they did that, but won’t disclose it publicly, or they didn’t do that, and should have by now. …

I asked the department six weeks ago for public records about all noncitizens registered to vote, along with letters, emails, memos, and other correspondence created to address the problem.

Last week, the department rejected almost all of my requests. The only document it released was a 263-page chain of emails from reporters trying to get information and the limited responses they received.

This is a classic example of a public agency making a problem exponentially worse by refusing to be transparent with the people it serves.

It didn’t help that Secretary of State* Pedro Cortes, who rejected interview requests in September, resigned three weeks later. The department, along with Gov. Wolf’s staff, would not say why that happened. [*The most common function of secretaries of state is to serve as the state’s chief elections official (although many states also have supervisors of elections, which are usually county elected officials).]

Still, the department divulged a little information. In a state House hearing last week, an official testified that 544 ballots were cast illegally — out of more than 93 million votes — in the last 18 years by noncitizens. And four out of five of the voters who should not have registered never cast a ballot.

The PennDot glitch will be fixed by the end of this year, according to the department. …

Reprinted here for educational purposes only. May not be reproduced on other websites without permission from philly .com.

1. What is not known about Pennsylvania’s 8.4 million registered voters?

4. What 3 questions came up after Pennsylvania’s Department of State said it had records showing 1,160 voter registration cancellations by non-citizens?

5. Answer the 3 questions:
a) How did this happen?
b) How many illegal registrations for foreign citizens are still on the books?
c) How does Pennsylvania fix this?