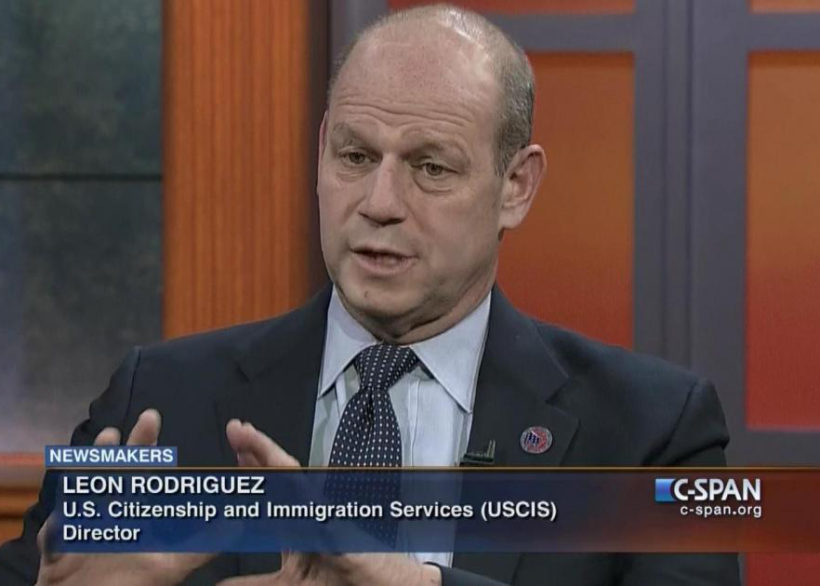 U.S. Citizenship and Immigration Services (USCIS) is a component of the U. S. Department of Homeland Security (DHS). The stated priorities of USCIS are to promote national security, to eliminate immigration case backlogs, and to improve customer services. USCIS is headed by a director, currently Leon Rodriguez (above), who reports directly to the Secretary of Homeland Security, Jeh Johnson.

(by Patricia Zengerle, Reuters) – U.S. immigration authorities’ lack of progress in automating their systems is compromising border security, making it more difficult to process people seeking to get into the country, a report said on Tuesday.

“We may be admitting individuals who wish to do us harm, or who do not meet the requirements for a visa,” John Roth, the Inspector General for the Department of Homeland Security, told a Senate Homeland Security Committee hearing.

The report from Roth’s office, released on Tuesday, said immigration officials expect it will take $1 billion and another three years, 11 years into the effort, to move from a paper-based system to automated benefit processing.

U.S. lawmakers have been calling for a tighter visa system since the November Paris attacks and December San Bernardino shootings. In Paris, some of the militants were Europeans radicalized after visiting Syria, and a California attacker had been admitted on a fiance visa.

They want to ensure that potential militants cannot enter the United States under programs, such as the “visa waiver” granted citizens of most western countries.

Roth told the Senate Homeland Security Committee that workers processing millions of applications for immigrant benefits work with a system “more suited to an office environment from 1950 rather than 2016.” He said some green cards and other immigration documents had been mailed to wrong addresses, or printed with incorrect names, which meant they could have fallen into the wrong hands.

The poor quality of electronic data that is kept makes it more difficult to engage in data matching, to root out fraud and identify security risks, Roth said.

Shipping, storing and handling over 20 million immigrant files costs more than $300 million a year, he added.

The report also said the EB-5 visa program, which admits investors who spend $500,000 or $1 million in the United States, depending on the area, may not be subject to close enough scrutiny to ensure Americans’ safety.

The current system also allows “known human traffickers” to use work and fiance visas to bring victims into the country, the report said.

Republican Senator Ron Johnson, the committee’s chairman, said the modernization was too slow and expensive. “It should not take years and years and billions and billions of dollars,” he said.

1. a) Who is John Roth?
b) What problems could the lack of progress in automating the immigration system cause, according to Mr. Roth?

2. a) For how many years have U.S. immigration officials been trying to switch their system from paper-based to automated?
b) How much more time and money do officials estimate it will take to switch from the paper based system to automated processing?

3. How does Mr. Roth describe the system that workers currently use to process the millions of immigration applications?

5. a) What is the EB-5 visa program?
b) What is concerning about this program?

6. How does the current system allow known human traffickers to bring victims into the country?

7. From “Background” below: Officials at USCIS refuted the Inspector General’s report, calling it “inaccurate.” But the DHS Inspector General John Roth responded in a letter to USCIS Director Leon Rodriguez, stating the USCIS has “continually minimized the shortcomings of the program and resisted independent oversight.”
a) Who do you think should be held accountable for the many problems at USCIS? (The President, Congress, USCIS Director Leon Rodriguez, Secretary of Homeland Security Jeh Johnson?) Explain your answer.
b) Ask a parent the same question.
Opinion questions. Answers vary.

Officials at USCIS refuted the Inspector General’s report, calling it “inaccurate.” But the Department of Homeland Security Inspector General John Roth responded in a letter to USCIS Director León Rodríguez. He wrote:

“I would be remiss if I did not take this opportunity to express my disappointment at the tone and substance of your office’s response to the audit report, as well as audit staff’s efforts throughout this project,” Roth wrote in a letter to Rodriguez. The USCIS has “continually minimized the shortcomings of the program and resisted independent oversight.”

(above by Leo Hohmann, WND)