No Cell Signal, No Wi-Fi. Growing Up Inside America’s ‘Quiet Zone’ 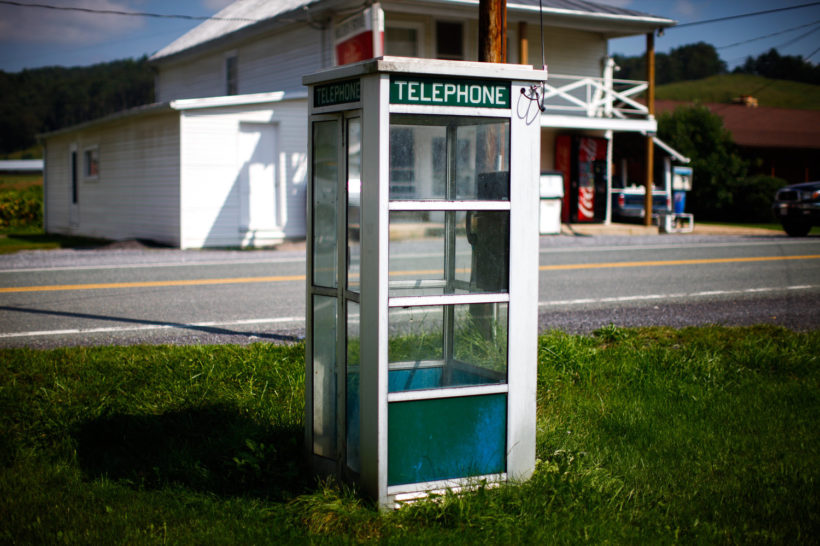 (by Dan Levin, New York Times) GREEN BANK, W.Va. — …High school senior Charity Warder has an iPhone, but she uses it mostly as a clock and a calculator. She makes phone calls from a land line, and she rarely texts her friends. Texting and driving? “It’s not a thing here,” she said.

When Charity wants to get online at home, she sits at her family’s desktop computer, which has a broadband connection that is so sluggish, it takes minutes to load a YouTube video.

“We fight over the computer,” said Charity, 18. “That’s actually a thing here.”

Welcome to Green Bank, West Virginia, population 143, where Wi-Fi is both unavailable and banned and where cellphone signals are nonexistent.

The near radio silence is a requirement for those living close to the town’s most prominent and demanding resident, the Green Bank Observatory, home to the world’s largest fully steerable radio telescope. To protect the sensitive equipment from interference, the federal government in 1958 established the National Radio Quiet Zone, a 13,000-square-mile area near the state’s border with Virginia. 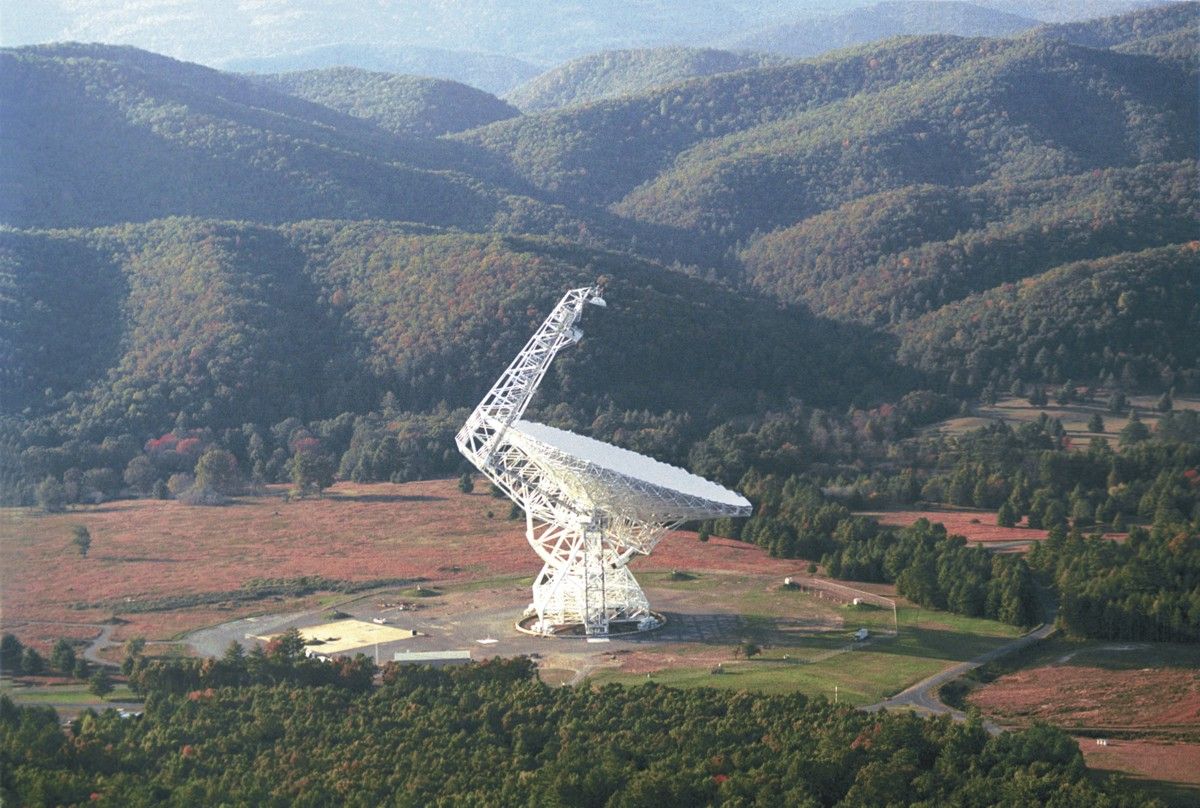 The observatory’s telescope “could detect your phone on Saturn in airplane mode,” states a sign outside its science center building, but is rendered much weaker if anyone uses electronics that emit radio waves. For those who live within 10 miles of the observatory, the limitations also include a ban on Bluetooth devices and microwaves, unless they are contained in a metal box, known as a Faraday cage, which blocks electromagnetic fields.

Nearly 15 million Americans live in sparsely populated communities where there is no broadband internet service at all, a stark digital divide across America between those with access to uber-fast connections and those with none. 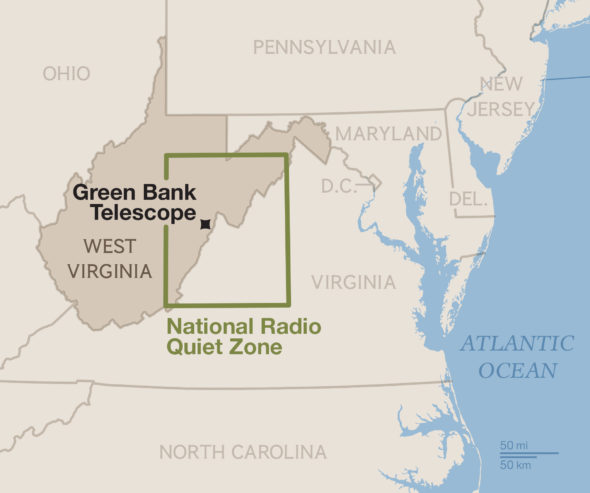 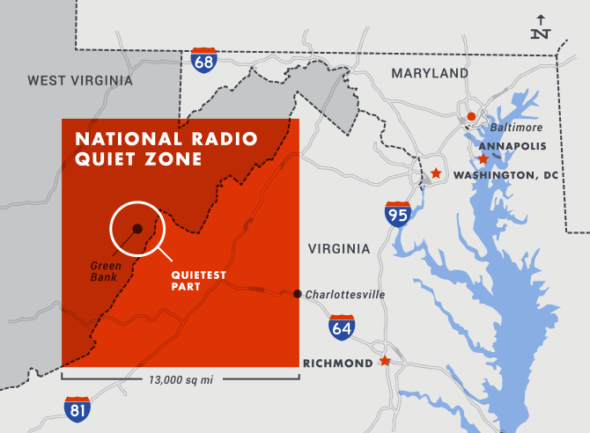 But in Green Bank, where the restrictions are mandatory, the quiet zone has in many ways created a time warp in the mountainous region. Phone booths loom near barns and stand guard on rural roads. Paper maps are still common. Here, people are less distracted by the technologies that have come to dominate 21st-century American life.

At a time when nearly 60 percent of American teens say they have been bullied or harassed online, and studies have found links between social media use and teen mental health problems, the digital limitations around Green Bank have created a unique kind of modern childhood, providing a glimpse into what it means to grow up without the constant buzz of texting and social media.

The quiet, too, has given young people here a greater appreciation for fostering in-real-life connections, the great outdoors and personal privacy. Even teenagers who are able to use Wi-Fi at home — in the quiet zone but outside its 10-mile core — said they spend less time online than most people their ages, and those who have moved to the quiet zone said they have discovered a newfound sense of adventure.

Although Charity received an iPhone 6 for Christmas two years ago, she said she rarely looks at it. She makes plans with friends the old-fashioned way: on a land line or in person. After school, instead of being glued to social media, she usually goes running before tending to her family’s goats, chickens and ducks. Then she typically makes dinner with her mother.

The family’s computer is helpful for homework — but not much else.

On a recent evening, Charity sat in the family’s cozy living room, chatting with her boyfriend and parents. Undistracted by technology, they laughed and maintained eye contact, a domestic scene they recognize as somewhat rare.

“It kind of makes us old-school,” said Charity. “My parents would kill me if I was staring at my phone and not listening to them.”

This fall, Charity will leave the quiet zone to attend West Virginia Wesleyan College, a small school in Buckhannon with about 1,400 students. In some ways, it will feel like moving to a foreign country, where the routine modes of communication are unfamiliar.

Growing up, Charity has remained largely shielded from the glare of social media, despite having accounts on TikTok, Snapchat and Instagram. Her school’s cyberbullying seminars had felt irrelevant until an out-of-town basketball game during her freshman year, when a girl posted a video of Charity [mocking her].  “I just never thought someone would do something like that,” Charity said. “People here aren’t used to that stuff.”

Charity’s mother, Tonya Warder, has warned her daughter about the risks of technology, and has wondered how she will fare in college with widely available cellphone coverage and Wi-Fi.

“Communication is a dying art because kids don’t talk,” Ms. Warder said, adding that she appreciates how the lack of cellphone service has influenced the habits of youth in and around Green Bank. “Ours do because there’s no alternative.”

…While the absence of cellphone coverage and limited Wi-Fi may be a point of pride for many here, the quiet zone has scared away some outsiders.

“[Some of our reletives won’t] visit because the teenagers are stressed out too much about not being on wireless,” said Dr. Karen O’Neil, the director of the observatory. On a recent afternoon, Dr. O’Neil stood in the observatory’s basement, where several high school students were tinkering with a computerized robot.

“They don’t care when they put down their phones,” she said, nodding toward the students, who are members of an after-school competitive robotics team overseen by observatory staff.

The observatory has long worked to share its scientific and engineering expertise with local schools, a partnership that has paid off most recently with the announcement that the Green Bank Elementary-Middle School was one of 10 schools nationwide selected to host HAM radio contacts with International Space Station crew members later this year.

Brycen Carroll, 14, a member of the robotics team and a freshman at [the same] high school, lives about 45 minutes from Green Bank, far enough away to have Wi-Fi but too rural for a strong internet connection capable of streaming movies. He said he sometimes plays video games after school, but prefers to work on his family’s 1963 Chevrolet Corvair or simply explore the wilderness.

“I live in the sticks,” Brycen said. “You can find a lot of interesting things when you just walk 20 feet out in the woods.  I don’t like to keep my face in my phone all the time because I like to enjoy what’s in the moment.”

Published at nytimes .com. Reprinted here for educational purposes only. May not be reproduced on other websites without permission from The New York Times.

1. What is the Green Bank Observatory?

2. What is the National Radio Quiet Zone?

4. a) What weakens the telescope’s signal?
b) What ban is in place for those who live within 10 miles of the observatory?

5. a) What is the population of the U.S.?
b) How many Americans live in rural areas with no broadband internet service at all?

6. Consider the positives and negatives of living in Green Bank. Would you visit for a week? a month? – or would you enjoy living there? Explain your answers.

The National Radio Quiet Zone (NRQZ) is a large area of land in the United States designated as a radio quiet zone, in which radio transmissions are heavily restricted by law to facilitate scientific research and the gathering of military intelligence. Roughly half of the zone is located in the Blue Ridge Mountains of west-central Virginia while the other half is the Allegheny Mountains of east-central West Virginia; a small part of the zone is in the southernmost tip of the Maryland panhandle. (Read more at wikipedia)