Nikki Haley Arrives at the U.N. 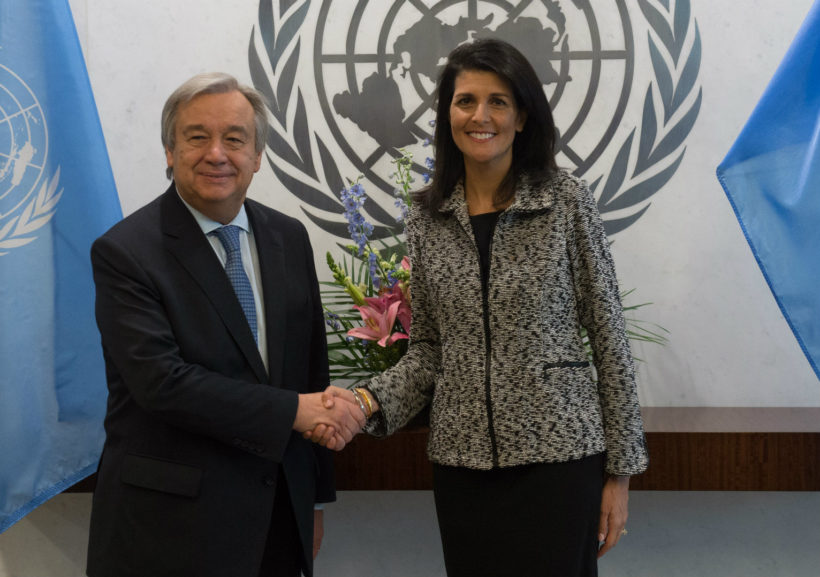 (by Michelle Nichols, Reuters) from the UN — The new U.S. ambassador to the United Nations, Nikki Haley, pledged on Friday to overhaul the world body and warned U.S. allies that if they do not support Washington, then the U.S. is “taking names” and will respond accordingly.

Haley made brief remarks to reporters as she arrived at the world body’s headquarters in New York to present her credentials to U.N. Secretary-General Antonio Guterres.

“Our goal with the administration is to show value at the U.N. and the way that we’ll show value is to show our strength, show our voice, have the backs of our allies and make sure that our allies have our back as well,” Haley said.

“For those that don’t have our back, we’re taking names, we will make points to respond to that accordingly,” added Republican President Donald Trump’s U.N. envoy.

Haley was halfway through her second term as South Carolina’s Republican governor when Trump picked her for the post.

French U.N. Ambassador Francois Delattre and British U.N. Ambassador Matthew Rycroft said they looked forward to working with Haley. The United States, Britain and France, along with Russia and China, are permanent veto-wielding members of the U.N. Security Council.

After her meeting with Guterres, a U.S. official said they had “a good and productive conversation about ways they can work together to reform the U.N.”

According to a draft executive order published by The Daily Beast, Trump wants a committee – including the U.S. secretary of state, attorney general and director of national intelligence -to carry out a one-year review of U.S. funding to international organizations with the aim of almost halving voluntary funding.

A senior U.S. administration official said on Friday that no such executive order was “expected at this time.”

The United States is the largest contributor to the United Nations, paying 22 percent of the $5.4 billion core U.N. budget and 28 percent of the $7.9 billion U.N. peacekeeping budget. These are assessed contributions – set by the U.N. General Assembly – and not voluntary payments.

U.N. agencies, such as the U.N. Development Programme, the children’s agency UNICEF, the World Food Programme and the U.N. Population Fund, are funded voluntarily.

Last year, Trump took to Twitter to disparage the 193-member world body after the United States abstained in a Dec. 23 U.N. Security Council vote, allowing the adoption of a resolution demanding an end to settlement building by U.S. ally Israel.

Trump, who had called on President Barack Obama’s administration to veto the resolution, warned that “things will be different” at the United Nations after he took office on Jan. 20.

[Ms. Haley has plenty of leverage at her disposal. The U.S. is the largest financial contributor to the U.N., providing 22% of its operating budget and 28% of peacekeeping costs in 16 missions around the world, estimated at nearly $8 billion a year.

Diplomats widely agree that the U.N. needs reform. The organization is weighed down by bureaucracy and procedure. Mr. Guterres began his tenure on Jan. 1 with a promise to improve efficiency through structural reorganizing. Some diplomats acknowledge that a little tough talk from the U.S. could benefit the U.N. and force it to accelerate the much-needed changes.]

1. What did Nikki Haley do before President Trump named her as U.S. Ambassador to the U.N.?

2. Who is the current U.N. Secretary General?

3. How did Ambassador Haley explain the U.S.’s goal for the U.N. under President Trump? – How will the U.S. achieve this goal?

4. As she arrived at the U.N. to present her credentials to the Secretary General, what did Ambassador Haley say about countries that don’t support the U.S.?

5. President Trump, who had called on President Obama in December to veto a U.N. resolution against our ally Israel, said that “things will be different” at the United Nations after he took office. All agree the U.N. needs reform. What did some diplomats say about tough talk from the U.S.?

6. Watch Ambassador Haley’s remarks as she arrived at the U.N. (see video under “Resources” below).  The U.S. funds almost one-quarter of the U.N. budget. There are 193 voting members in the General Assembly.  Each member, including the U.S., gets one vote.
a) Is it unreasonable or good policy for the Trump administration to say the U.S. is going to change how we do business at the U.N.? Explain your answer.
b) Ask a parent the same question.

CHALLENGE: President Obama’s foreign policy style was to “lead from behind.”  President Trump’s leadership style is the exact opposite. Consider the two – which do you think is better for America and our interests?

According to WorldAtlas .com, there are 194 independent countries in the world today.
192 countries are UN members. The exceptions are Taiwan (in 1971, the UN ousted Taiwan and replaced it with the People’s Republic of China) and Vatican City. Kosovo is not yet a member (it is not recognized as an independent country by all).
Each country gets one vote in the UN General Assembly.
The U.S. pays at least 22% of the overall yearly budget of the UN.

Watch the video below of Nikki Haley arriving at the United Nations headquarters in New York City: