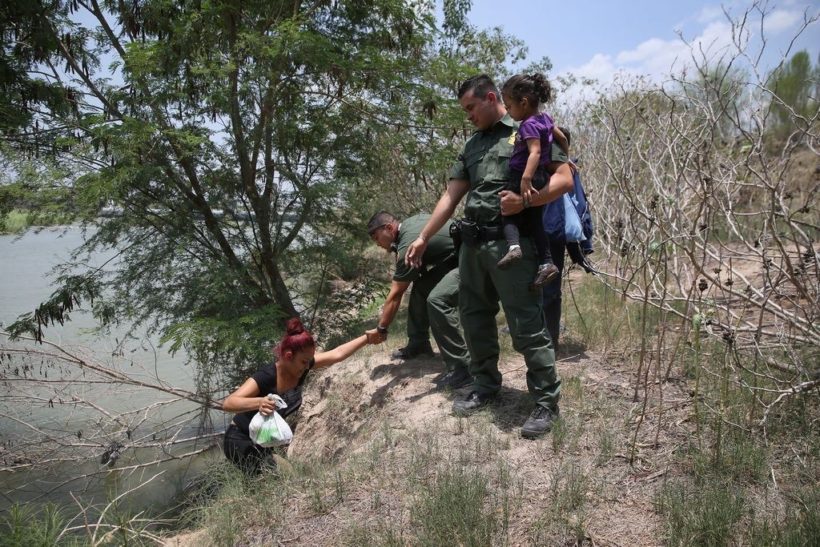 Border patrol agents are pictured in 2014 helping a mother and child from El Salvador after they crossed the Rio Grande illegally. The Rio Grande Valley is where, in the past, the most unaccompanied minors reportedly arrived. (UK Daily Mail)

In December, 16,000 parents and children were apprehended; in March, a month in which immigration typically increases because of temperate weather, the number was just over 1,100.

It was a remarkable decline – steeper than the 72 percent drop in overall apprehensions – but for eight DHS officials interviewed by Reuters it was not surprising.

President Trump has spoken about the need to crack down broadly on all illegal immigrants. But, internally, according to the DHS officials familiar with the department’s strategy, his administration has focused on one immigrant group more than others: women with children, the fastest growing demographic of illegal immigrants. This planning has not been previously reported.

In the months since President Trump’s inauguration, DHS has rolled out a range of policies aimed at discouraging [mothers with children] from attempting to cross the border, including tougher initial hurdles for asylum claims and the threat of prosecuting parents if they hire smugglers to get their families across the border.

The department has also floated proposals such as separating women and children at the border.

DHS Secretary John Kelly told a Senate hearing on April 5 that the sharp drop in illegal immigration, especially among women and children, was due to President Trump’s tough policies.

To date, it has been the threat of new policies rather than their implementation that has suppressed families from coming to the U.S. illegally.

Mothers and children aren’t being separated – and DHS has shelved the plan; parents haven’t been prosecuted, and there is no wall along most of the border. Yet the number of migrants trying to cross – especially women and children – has dropped drastically.

Asked to comment on the policy of targeting women with children, DHS spokesman Jonathan Hoffman referenced the March drop, saying, “Those were 15,000 women and children who did not put themselves at risk of death and assault from smugglers to make the trip north.”

The White House declined to comment and referred Reuters to DHS.

For months, Central Americans had heard about President Trump’s get-tough policies. And public service announcements on radio and television presented bleak pictures of what awaited those who traveled north. Some of the ads were funded by the United States, others by United Nations agencies and regional governments.

One radio ad in Honduras featured a mother, saying, “It’s been a year and I don’t know if she is alive or dead. I’d do anything to have her here with me. Curse the day I sent her north.”

“That worries any mother that wants to go to the United States with their kid, and being separated drastically changes their plans,” she said.

The policies focusing on women and children have their roots in a working group consisting of Capitol Hill staffers and others called together by President Trump’s transition team in the weeks after the Nov. 8 election.

The group was asked to develop policies to discourage illegal border crossings and more quickly expel illegal immigrants after they crossed the border, according to two of the DHS officials and a congressional aide.

One goal was to help President Trump fulfill a major campaign promise: ending so-called “catch and release,” the practice of apprehending illegal immigrants but then freeing them to live in the United States while their asylum or deportation cases were resolved.

The group quickly identified a major obstacle – the large numbers of women and children continuing to cross the border, said the DHS officials and the aide.

Because a federal court ruling bars prolonged immigration detention of juveniles, the Obama administration released mothers and children to live in the United States while awaiting resolution of their asylum or deportation cases.

The incoming Trump administration pointed out that the policy encouraged women to make the dangerous journey north with their children in tow. But the new administration was bound by the same court ruling. …..

They needed a solution. The thinking was that “if they can just implement tough policies for eight weeks – or even threaten to do that – they would see the numbers of families crossing just plummet,” said one DHS official familiar with the planning. …..

1. How did the number/percent of parents with children illegally crossing the border from Mexico into U.S. change from December 2016 to March 2017?

2. For what two reasons was DHS focusing on this group?

3. What policies has DHS discussed and/or implemented to stop the flow of women and children coming across the border?

4. From para. 8: “To date, it has been the threat of new policies rather than their implementation that has suppressed family migration.” Why do you think this is so?

5. Why do you think it is especially dangerous for women and/or children to cross the border illegally? — What types of threats / danger do they face?

The number of children found trying to cross the Mexican border without parents has spiked in recent years. Between 2008 and 2011, 6,000 to 7,500 children per year ended up in the custody of the Health and Human Services Department’s Office of Refugee Resettlement. In 2012 border agents apprehended 13,625 unaccompanied children and that number surged to more than 24,000 in 2013.

The spike in children trying cross the border alone forced DHS to divert resources away from other missions, including combating human and drug trafficking, Border Patrol Deputy Chief Ronald Vitiello wrote in a memo on May 30, 2014.

The vast majority of migrants who enter the U.S. illegally do so with the help of the coyotes, named after the scavengers that prowl the border.

From October 2013 to June 2014, more than 57,000 unaccompanied minors, the vast majority from Guatemala, El Salvador and Honduras, were apprehended at the U.S. border. This was more than double the same period the year before.

Many of the children and teenagers who traveled to the United States during the Obama administration said they did so after hearing they would be allowed to stay.

People smuggling is a high-risk, often high-yield business estimated to generate $6.6 billion a year for smugglers along Latin America’s routes to the U.S., according to a 2010 United Nations report.

The migrants pay anywhere from $4,000 to $10,000 each for the illegal journey across thousands of miles in the care of smuggling networks that in turn pay off government officials, gangs operating on trains and drug cartels controlling the routes north.