Moscow warns US over missile system deployment to S. Korea 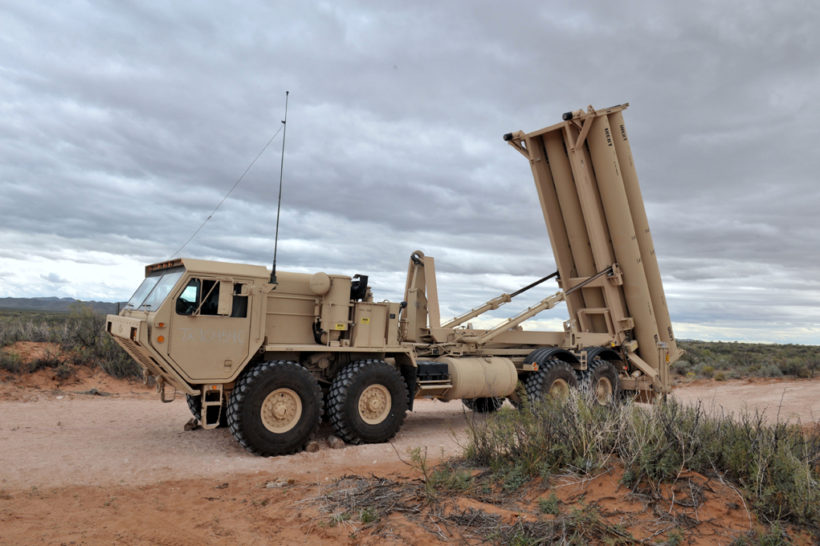 The Terminal High Altitude Area Defense (THAAD) is a land-based element capable of shooting down a ballistic missile both inside and just outside the atmosphere.

(by Agence France-Presse news) — Moscow on Wednesday warned that Washington’s deployment of a US missile defense system to South Korea could spark an arms race in the region.

South Korean and US defense officials said last week they would begin formal talks on the deployment of the Terminal High Altitude Area Defense System (THAAD) system in response to North Korea’s recent nuclear and missile tests. [America’s highly deployable THAAD system fires anti-ballistic missiles into the sky to smash into enemy missiles either inside or outside the Earth’s atmosphere during their final flight phase. The interceptor missiles carry no warheads, instead relying on kinetic energy to destroy their targets.]

“The appearance of elements of the US global missile defense system in the region — which is characterized by a very difficult security situation — can provoke an arms race in Northeast Asia and complicate the resolution of the nuclear problem on the Korean peninsula,” said the Russian foreign ministry.

“On a more global scale, this step can increase the destructive influence of the US global missile defense system on international security and stability.”

The foreign ministry reiterated that Pyongyang’s nuclear and missile tests “could not but inspire strong condemnation” but accused Washington of using them to expand its missile defense system.

The US insists that the defense system is a deterrent necessitated by the North’s advancing ballistic missile program. China has also argued it would undermine stability in the delicately balanced region.

[While China firmly opposes the deployment of such anti-missile hardware so close to its borders, the move to place THAAD in South Korea underscores Washington’s frustrations with Beijing’s failure to take a tougher line with Pyongyang over its nuclear weapons program.

Pentagon spokesman Peter Cook stressed the missile defense system was in no way meant to pose a threat to China. “If the THAAD system were deployed to the Korean Peninsula, it would be focused solely on North Korea, contribute to a layered missile defense that would enhance the alliance’s existing missile defense capabilities against potential North Korean missile threats,” he said. “This is a defensive system put in place. We don’t believe it should pose any kind of concern to the Chinese.”]

Pyongyang has said that the deployment of a missile defense system would be a Cold War* tactic to “contain” China and Russia. [*a cold war is a state of political hostility between countries characterized by threats, propaganda, and other measures short of open warfare, in particular; The Cold War was the state of political hostility that existed between the Communist Soviet bloc countries and the US-led Western powers from 1945 to 1990.]

Five THAAD batteries are currently operational, according to the Pentagon’s Missile Defense Agency, and two more were ordered in 2014.

Copyright 2016 Agence France-Press at YahooNews. Reprinted here for educational purposes only. May not be reproduced on other websites without permission from the AFP.

2. a) Why are US and South Korean defense officials beginning formal talks on the deployment of a THAAD system to South Korea?
b) What is THAAD?

4. What accusation did Russia make after the U.S./South Korean announcement?

5. How did the U.S. respond to this accusation?

6. Why does the Chinese government say they are opposed to US deploying a THAAD to South Korea?

The THAAD is a missile interceptor that can hunt and blast incoming missiles with a 100% success rate. Simply put, it’s one of the most advanced missile-defense systems on Earth. Its possible future deployment to South Korea is already cause for concern in Beijing. (from an Oct. 2015 Business Insider article)