Mattis warns North Korea of ‘massive military response’ if it threatens US, allies 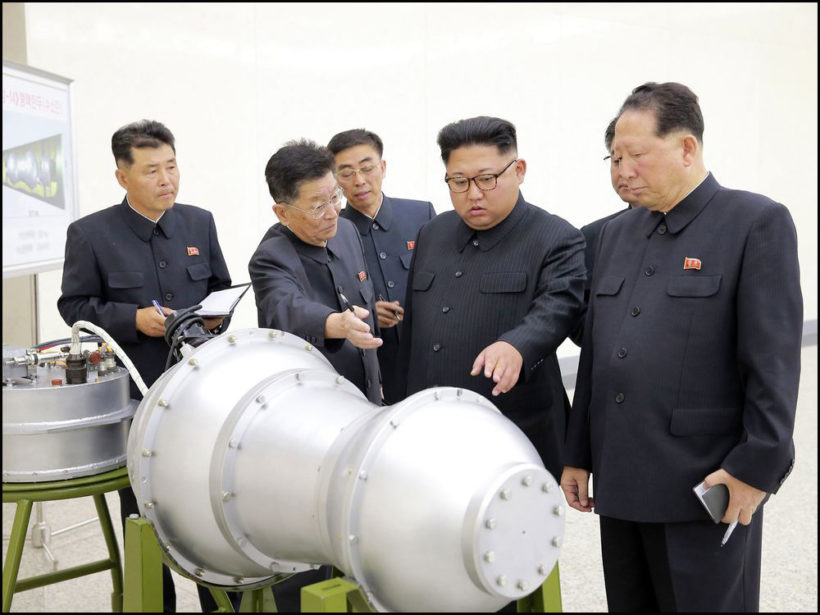 On Sunday North Korea tested a miniaturized hydrogen bomb capable of fitting on an intercontinental ballistic missile. Above, North Korean dictator Kim Jong-un (second from right) inspects a purported hydrogen bomb in this photo released by the Korean Central News Agency on September 3, 2017.

(by Julia Manchester, TheHill) – Defense Secretary James Mattis on Sunday issued a stark warning to North Korea, saying the country would be met with a “massive military response” if it threatened the U.S. or its allies.

[North Korea has been working to develop a nuclear-tipped missile capable of hitting the United States and has recently threatened to land missiles near the U.S. Pacific territory of Guam. Secretary Mattis’ warning was in response to the following actions by North Korea:

“Any threat to the United States or its territories including Guam or our allies will be met with a massive military response,” Mattis said in a statement outside of the White House after meeting with President Trump [and top military commanders].

“Kim Jong Un should take heed of the United Nations Security Council’s unified voice. All members unanimously agreed on the threat North Korea poses. And they remain unanimous in their commitment to the denuclearization of the Korean peninsula. Because we are not looking to the total annihilation of a country, namely, North Korea,” he continued. Mattis said the U.S. had “many military options” regarding the Korean peninsula, and that the president wanted to be briefed on all of them.

North Korea’s move is a show of defiance against Washington and the international community.

“President Trump reaffirmed the commitment of the United States to defending our homeland, territories, and allies using the full range of diplomatic, conventional, and nuclear capabilities at our disposal,” the White House said.

The council announced it would be having an emergency meeting [on Monday] to discuss the developments. [See “Resources” below for video of U.S. Ambassador Nikki Haley’s comments.]

When asked whether the U.S. would attack North Korea, Trump responded “We’ll see.”

The president said last month North Korea would be met with “fire and fury” if it continued to threaten the U.S. and its allies. [Responding to critics who opposed his tough talk, the President said, “It’s about time that somebody stuck up for the people of this country and for the people of other countries. So if anything, maybe that statement wasn’t tough enough. And we’re backed 100% by our military.”

Last week, President Trump said that talking with North Korea was no longer the answer, after the country launched an ICBM [Intercontinental Ballistic Missile] over Japanese airspace. [He tweeted:]

First published at thehill on September 3rd. Reprinted here for educational purposes only. May not be reproduced on other websites without permission from The Hill. Visit the website at thehill .com.

2. What provocative actions has North Korea taken over the past few months?

3. What warning did U.S. Secretary of Defense James Mattis issue to North Korea in statement outside the White House on Sunday?

4. How did the Hill reporter characterize North Korea’s recent actions?

6. Ask a parent: Do you agree or disagree with the Trump administration’s threat of military retaliation should North Korea attack us or our territories or allies? Please explain your answer.

About the Defense Department: