Largest destroyer built for Navy headed to sea for testing 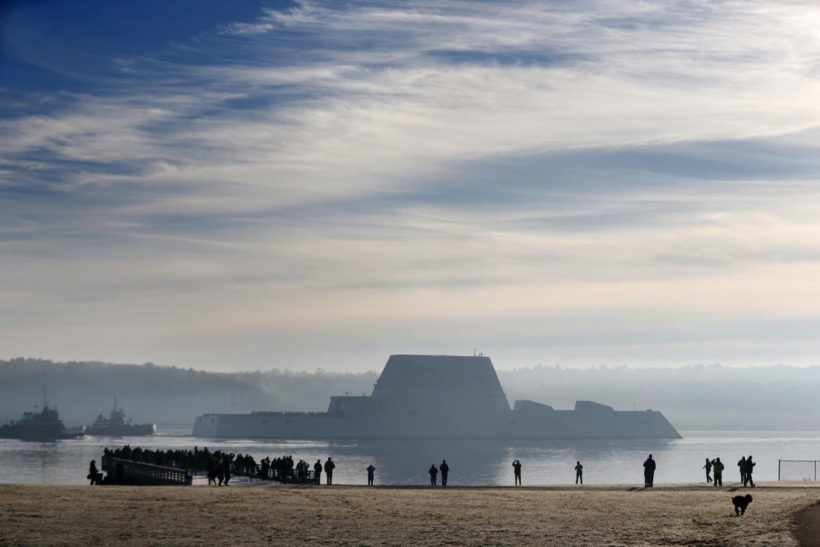 The first Zumwalt-class destroyer, the largest ever built for the U.S. Navy, heads down the Kennebec River after leaving Bath Iron Works, Monday, Dec. 7, 2015, in Bath, Maine. The ship is headed out to sea for the first time to undergo sea trials.(AP Photo/Robert F. Bukaty)

(from The Boston Herald, Associated Press) BATH, Maine — The largest destroyer ever built for the U.S. Navy headed out to sea for the first time Monday, departing from shipbuilder Bath Iron Works and carefully navigating the winding Kennebec River before reaching the open ocean where the ship will undergo sea trials. More than 200 shipbuilders, sailors and residents gathered to watch as the futuristic 600-foot, 15,000-ton USS Zumwalt glided past Fort Popham, accompanied by tugboats. [The ship is the largest and most technologically advanced destroyer ever built for the Navy, as well the first all-electric warship. It is named after Admiral Elmo Zumwalt, the youngest man to serve as Chief of the Navy’s Naval Operations.]

Kelley Campana, a Bath Iron Works employee, said she had goose bumps and tears in her eyes.

“This is pretty exciting. It’s a great day to be a shipbuilder and to be an American,” she said. “It’s the first in its class. There’s never been anything like it. It looks like the future.”

Larry Harris, a retired Raytheon employee who worked on the ship, watched it depart from Bath.

“It’s as cool as can be. It’s nice to see it underway,” he said. “Hopefully, it will perform as advertised.” Bath Iron Works will be testing the ship’s performance and making tweaks this winter. The goal is to deliver it to the Navy sometime next year.

“We are absolutely fired up to see Zumwalt get underway. For the crew and all those involved in designing, building, and readying this fantastic ship, this is a huge milestone,” the ship’s skipper, Navy Capt. James Kirk, said before the ship departed.

The ship has electric propulsion, new radar and sonar, powerful missiles and guns, and a stealthy design to reduce its radar signature. Advanced automation will allow the warship to operate with a much smaller crew size than current destroyers.

All of that innovation has led to construction delays and a growing price tag. The Zumwalt, the first of three ships in the class, will cost at least $4.4 billion.

The ship looks like nothing ever built at Bath Iron Works.

The inverse bow juts forward to slice through the waves. Sharp angles deflect enemy radar signals. Radar and antennas are hidden in a composite deckhouse.

The builder sea trials will answer any questions of seaworthiness for a ship that utilizes a type of hull associated with pre-dreadnought battleships from a century ago.

Critics say the “tumblehome” hull’s sloping shape makes it less stable than conventional hulls, but it contributes to the ship’s stealth and the Navy is confident in the design.

Eric Wertheim, author and editor of the U.S. Naval Institute’s “Guide to Combat Fleets of the World,” said there’s no question the integration of so many new systems from the electric drive to the tumblehome hull carries some level of risk.

Operational concerns, growing costs and fleet makeup led the Navy to truncate the 32-ship program to three ships, he said. With only three ships, the class of destroyers could become something of a technology demonstration project, he said.

From the Associated Press. Reprinted here for educational purposes only. May not be reproduced on other websites without permission from The Boston Herald. Visit the website at bostonherald .com.

NOTE to students: Before answering the questions, read the “Background” and watch the videos below.

3. What is Bath Iron Works goal for the Zumwalt?

5. Why did the shipbuilder change the number of ships it is building in this class?

6. What word or words best describes your reaction to the news of the USS Zumwalt? (pride, astonishment, inspiration, dismay…)? Explain your answer.

Hundreds of people gathered in Bath and at Popham Beach, Maine on Monday morning to watch the Navy’s newest “stealth” destroyer sail down the Kennebec River for the first time for testing in the open ocean.

Around 8:30 a.m., tugboats slowly helped maneuver the USS Zumwalt away from the pier at Bath Iron Works and began the cruise toward the Atlantic. About 45 minutes later, the bow of the first became visible in the distance from Fort Popham. And when the massive, $4.3 billion warship finally sailed by, dwarfing the Civil War-era fort, large crowds of onlookers along the beach cheered and waved. The 600-foot-long Zumwalt is the largest and most technologically advanced destroyer ever built for the Navy and is the first of three Zumwalt-class ships under construction at Bath Iron Works.  Portland Press Herald (Maine)

About the USS Zumwalt, a DDG-1000 class destroyer:

The largest destroyer built for the U.S. Navy cuts an imposing figure: massive, with an angular shape, hidden weapons and antennas, and electric-drive propulsion. But underneath the stealthy exterior resides a style of hull that fell out of favor a century ago in part because it can be unstable.

The Navy will soon learn how this modern take on the “tumblehome” hull holds up when the first-in-class Zumwalt heads out to sea in December for builder trials in the rough-and-tumble North Atlantic.

Amy Lent, of the Maine Maritime Museum, which works closely with the shipyard, said taxpayers needn’t worry because the Navy and shipbuilder Bath Iron Works have “tested the hell out of it.”

“This is an enormous investment. There’s so much at stake. They’re not slapping something together and sending it out to sea,” she said. “I think they’re pretty confident. They know what they’re doing.”

Designers chose the hull style associated with pre-dreadnought battleships, but this warship looks nothing like one from President Theodore Roosevelt’s “Great White Fleet.”

Typical of tumblehomes, though, the hull slopes inward above the waterline, giving the Zumwalt something of a pyramid shape. The shape can cause problems in certain conditions, critics say.

Concerns have been voiced in the ship-design and shipbuilding communities about the warship’s overall stability – and any instability could be exacerbated if there’s battle damage, said Matthew Werner, dean at the Webb Institute, which teaches naval architecture and marine engineering in Glen Cove, New York.

But the hull’s sloping sides contribute to the Navy’s goal of stealth. The Navy contends the 600-foot-long, 15,000-ton behemoth will look like a small fishing boat on enemy radar.

“It’s a true engineering challenge. They’re trying to make a ship with stealth characteristics that requires certain shapes. To do that, they have to compromise,” Werner said.

Norman Polmar, a naval historian, analyst and author who is sometimes critical of the Navy’s decisions, said he has no qualms about the Zumwalt’s seaworthiness after a large-scale model was built to prove the concept.

The Navy has built a modern version of the tumblehome that utilizes computers to aid in stability, much like the Air Force used computers to transform a flying wing – the B-2 bomber – into a stable aircraft. “The technology today makes that concept doable and much more efficient,” Polmar said.

The ship is 50 percent bigger than the current generation of destroyers but has advanced automation to reduce the crew size. It’ll use turbines similar to those used in a Boeing 777 to create electricity to drive the ship. It’ll have new radar and sonar, and powerful guns with rocket-propelled projectiles.

The Navy, which views the ship as an important part of the Obama administration’s Asia-Pacific strategy, can’t afford a flop after the cost of the first ship ballooned to at least $4.4 billion and construction fell behind schedule.

“The Navy has validated the ship’s design through extensive computer modeling and simulation, as well as scale model testing in various sea states, speeds and weather conditions. We are confident the design is safe, that the ship is seaworthy, and its operating parameters are known and understood,” said Capt. Thurraya Kent, a spokeswoman.

Bath Iron Works will be testing the ship’s performance and making tweaks this winter. The goal is to deliver it to the Navy next year. (published November 29, 2915 at Portland Press Herald)