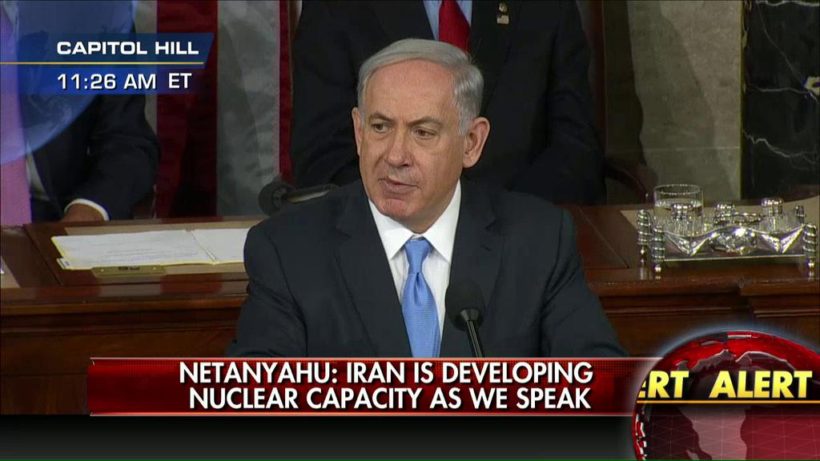 “That deal would not prevent Iran from acquiring nuclear weapons, it would guarantee it – lots of them,” Mr. Netanyahu said. “This is a bad deal. It’s a very bad deal. We’re better off without it.”

Reacting to the prime minister’s speech, a senior Obama administration official complained that he offered no alternative to the present course of the talks. “Where is the alternative? Simply demanding that Iran completely capitulate [give in] is not a plan, nor would any country support us in that position,” the official said. “The prime minister offered no concrete action plan.”

Mr. Netanyahu, drawing frequent applause in the packed House chamber, directly challenged President Barack Obama ’s argument that a diplomatic accord allowing Tehran to retain some nuclear capabilities would be more effective than additional sanctions or military action. He said any agreement that stops short of completely dismantling Tehran’s nuclear program would be ineffective.

He also called on the U.S. to use the nuclear talks as leverage for forcing Iran to change its behavior, such as including provisions that the Iranian regime would stop supporting terrorism and threatening Israel.

Such a move would expand the scope of the international nuclear talks, which Obama administration officials have said repeatedly aren’t aimed at a broader rapprochement* with Iran. [*rapprochement: the development of friendlier relations between countries or groups of people who have been enemies]

“Iran has proven time and again that it cannot be trusted,” Mr. Netanyahu said.

Negotiators in U.S.-led talks with Iran are working toward a breakthrough by the end of March. Iran has said its nuclear program is for peaceful purposes. [No one believes this to be true.]

The White House has said it aims to get the best agreement possible from the talks, and won’t agree to a bad deal.

President Obama said Monday that the U.S. and other world powers negotiating with Iran are working toward a deal that would partially freeze Iran’s nuclear activity for at least 10 years and include measures to verify Tehran’s compliance. The goal, Mr. Obama said, is to ensure that Iran remains a year away from the ability to acquire a nuclear weapon.

“There’s no expert on Iran or nuclear proliferation around the world that seriously thinks that Iran is going to respond to additional sanctions by eliminating its nuclear program,” Mr. Obama said. [The WSJ provides no support for President Obama’s assertion here.]

Mr. Netanyahu’s address, which came three weeks before the next deadline for an Iran deal and two weeks before the Israeli leader is up for re-election, has deeply strained Israel’s relations with the Obama administration. [The media all say the same here, but it has been argued that President Obama and the Prime Minister already had a strained relationship. One example: President Obama refused to meet with Netanyahu during the UN General Assembly meeting.]

It has also has divided Democrats and Republicans over an alliance that has long enjoyed bipartisan support. Democrats and the White House were largely left in the dark as Republican leaders and Mr. Netanyahu’s aides quietly arranged for his speech. [It is thought that Republican Speaker John Boehner skipped this protocol because President Obama had said he would veto new sanctions on Iran. Republicans and some Democrats believe stronger sanctions are working and the best way to force Iran to end its nuclear weapons program is by increasing sanctions.]

Mr. Netanyahu directly appealed to lawmakers to block the emerging deal. His argument appeared to have some impact. Sen. Dianne Feinstein (D., Calif.) told CNN afterward that a 10-year time frame isn’t long enough and should be extended to 15 or 20 years.

NOTE: This is a very important issue for the U.S. Ask a parent to read the article and discuss your answers. Also, consider watching the speech and answering the Challenge questions.

1. In his speech to Congress Tuesday, why did Israeli Prime Minister Benjamin Netanyahu say the deal the Obama administration wants to make with Iran over its nuclear weapons program is a bad deal?

2. a) What argument has President Obama made to support making a deal with the Iranian government?
b) How did Prime Minister Netanyahu counter that argument?

3. What did PM Netanyahu call on the U.S. to do in regard to the nuclear talks with Iran?

4. a) What is President Obama’s goal for the deal he and other world powers are negotiating to partially freeze Iran’s nuclear activity for at least 10 years?
b) What is Prime Minister Netanyahu’s goal for negotiations with Iran?

5. Barack Obama is the President of the United States.
a) Do you think Speaker Boehner was right to breach protocol by not consulting with the White House before extending the invitation to PM Netanyahu?
b) Do you think President Obama was right to say he would not watch Israeli Prime Minister Netanyahu’s speech to Congress?
Explain your answers.

6. A senior Obama administration official complained that Prime Minister Netanyahu offered no alternative to the present course of the talks. “Where is the alternative? Simply demanding that Iran completely capitulate [give in] is not a plan, nor would any country support us in that position,” the official said. “The prime minister offered no concrete action plan.”
a) Prime Minister Netanyahu spent the first 15 minutes of his speech talking about Iran’s support for terrorism throughout the Middle East. Saudi Arabia is the enemy of Iran. Do you think Saudi Arabia and other Arab countries would or would not support the U.S. if President Obama called for Iran to completely capitulate? Explain your answer.
b) Do you think “the prime minister offered no concrete action plan”?  Explain your answer.

7. In the comments section of one news site, a reader wrote that he supported Prime Minister Netanyahu:  “I think Netanyahu is more qualified to know what to do than Obama.” What do you think of this assertion?

8. Do you think the approximately 50 Democratic lawmakers who boycotted the speech were right to do so? Explain your answer.

CHALLENGE: The media for the most part has portrayed Israeli Prime Minister Benjamin Netanyahu’s speech to Congress as insulting to President Obama and the Democrats in Congress. Watch the Prime Minister’s speech in its entirety at: c-span.org/video/?324609-2/israeli-prime-minister-benjamin-netanyahu-address-congress

Then answer the following questions: