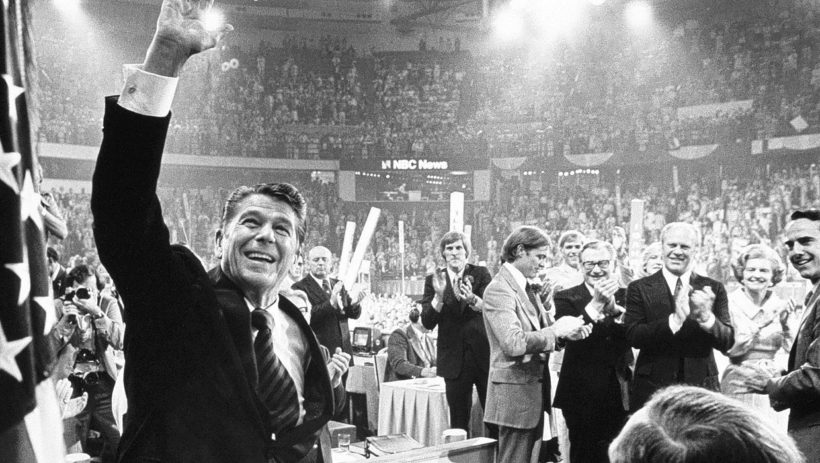 (by Robert Costa and Tom Hamburger, The Washington Post) – Republican officials and leading figures in the party’s establishment are preparing for the possibility of a brokered convention as businessman Donald Trump continues to sit atop the polls in the GOP presidential race.

More than 20 of them met last Monday near the Capitol for [the monthly] dinner meeting held by Republican National Committee Chairman Reince Priebus, and the prospect of Trump nearing next year’s Republican nominating convention in Cleveland with a significant number of delegates dominated the discussion, according to five people familiar with the meeting.

[Discussing] that scenario as Priebus and Senate Majority Leader Mitch McConnell (R-Ky.) listened, several [Republicans] argued that if the controversial billionaire storms through the primaries, the party’s establishment must lay the groundwork for a floor fight in which the GOP’s mainstream wing could coalesce [join together] around an alternative, the people said.

The development represents a major shift for veteran Republican strategists, who until this month had spoken of a brokered convention only in the most hypothetical terms — and had tried to encourage a drama-free nomination by limiting debates and setting an earlier convention date.

Now, those same leaders see a floor fight as a real possibility. And so does Trump, who said in an interview last week that he, too, is preparing.

Because of the sensitivity of the topic — and because they are wary of saying something that, if leaked, would provoke Trump to bolt the party and mount an independent bid — Priebus and McConnell were mostly quiet during the back-and-forth. They did not signal support for an overt [open] anti-Trump effort.

But near the end, McConnell and Priebus acknowledged to the group that a deadlocked convention is something the party should prepare for, both institutionally within the RNC and politically at all levels in the coming months.

When asked Thursday about the dinner and convention planning, Sean Spicer, the RNC’s chief strategist and spokesman, said: “The RNC is neutral in this process, and the rules are set until the convention begins next July. Our goal is to ensure a successful nomination, and that requires us thinking through every scenario, including a contested convention.”

During the dinner, attendees [discussed] exactly how a brokered convention would [occur]. It would happen if no candidate was able to win the nomination [with at least 50% of the vote] on a first-ballot vote, starting a multi-ballot exercise on the floor of the arena that could extend for hours until a candidate has secured sufficient support.

Many of the delegates are “bound” on the first ballot, meaning they must support the candidate they chose in primaries or at state conventions. But that restriction would lift if no nominee is chosen. The jockeying for delegates on a second ballot — or third, fourth or fifth — would be intense and full of political dealmaking, thus the term “brokered” convention.

Upon leaving the Monday dinner, several attendees said they would share memos about delegate allocation in each state as well as research about the 1976 convention, the last time the GOP gathered without a clear nominee.

The rules for selection of delegates are complicated — and largely decided state by state. Most states now elect delegates on a proportional basis, with at-large statewide delegates supplemented by delegates awarded by each congressional district.

This makes the task of securing delegates more difficult in many states, because Republican candidates must, in some cases, push for support in overwhelmingly Democratic districts.

They must also qualify for each state’s ballot in order to win any delegates at all, making the arduous [very difficult] series of state-by-state rules governing ballot access a potentially critical factor as well.

The campaign of Sen. Ted Cruz (R-Tex.) seems to have mastered the intricacies of state ballot access rules and is said to have qualified in more than 40 states and territories, more than any other candidate.

The emerging consensus [general agreement] at the highest levels of the Republican Party about how the 2016 race could unfold comes after a fresh wave of polls showing Trump leading in early-voting states and nationally, even as he continues to unleash incendiary comments such as his proposal to block Muslims from entering the United States. It also marks the close of a months-long chapter in the campaign when a brokered convention was considered a fanciful concept rather than a possibility that merited serious review.

“That said, people shouldn’t be panicking, and I think things will calm down when people in the party leadership realize there are core truths to what Trump is saying and he’s not trying to take down the party. For many conservatives, his candidacy is a positive disruption,” Bennett said. “Let things run their course.”

If anything, he added, the GOP convention “may get a ton of interest. People will want to tune in. They won’t tune in to the Democratic coronation [of Hillary Clinton].”  …..

2. What did Republicans discuss during their monthly RNC meeting in Washington last week? Be specific.

3. a) Why don’t RNC Leaders want to appear to be taking sides in the nomination of the candidate?
b) Why do you think RNC leaders don’t want Donald Trump to be the Republican nominee?

4. What would have to occur for a brokered convention to take place?

5. Why is there no chance for a brokered convention for the Democratic Party nominee?

6. Do you agree with conservative radio host Bill Bennett’s assertion about the conventions? Explain your answer.

7. If you were a Republican voter, would you want the Republican establishment to determine who the candidate will be if Trump gets the most votes but not enough to win the nomination outright? Explain your answer.

CHALLENGE: Watch tomorrow night’s debate between the candidates. Pay attention to the questions the moderators ask. Fill in the “Presidential Primary Debate” chart for the questions below:

A U.S. presidential nominating convention is a political convention held every four years in the United States by most of the political parties who will be fielding nominees in the upcoming U.S. presidential election. The formal purpose of such a convention is to select the party’s nominee for President, as well as to adopt a statement of party principles and goals known as the platform and adopt the rules for the party’s activities, including the presidential nominating process for the next election cycle. Due to changes in election laws, the primary and caucus calendar, and the manner in which political campaigns are run, conventions since the later half of the 20th century have virtually abdicated their original roles, and are today rarely more than ceremonial affairs.

A brokered convention is a situation in which no single candidate has secured a pre-existing majority of delegates (whether those selected by primary elections and caucuses, or superdelegates) prior to the first official vote for a political party’s presidential candidate at its nominating convention.

Once the first ballot, or vote, has occurred, and no candidate has a majority of the delegates’ votes, the convention is then considered brokered; thereafter, the nomination is decided through a process of alternating political horse-trading, and additional re-votes.

In this circumstance, all regular delegates (who, previously, may have been pledged to a particular candidate according to rules which vary from state to state) are “released,” and are able to switch their allegiance to a different candidate before the next round of balloting. It is hoped that this ‘freedom’ will result in a re-vote resulting in a clear majority of delegates for one candidate.

Superdelegate votes are counted on the first ballot.

New report on the possibility of a brokered convention: