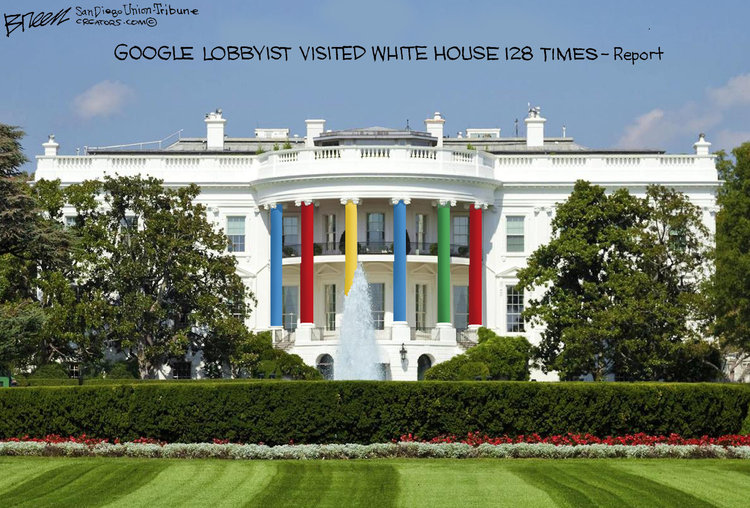 (from CNBC) – Google representatives attended White House meetings more than once a week, on average, from the beginning of Obama’s presidency through October 2015. Nearly 250 people have shuttled from government service to Google employment or vice versa over the course of his administration.

In a town where proximity to power is a measure of clout, Google’s ties with the Obama administration in Washington, D.C., are unrivaled among its tech and telecom peers. At least in sheer quantity.

Johanna Shelton, Google’s head of public policy, has met with White House officials 128 times over the course of the Obama administration* — more visits than the telecom and cable industry combined, according to the nonpartisan watchdog group Campaign for Accountability.

Ms. Shelton visited with White House representatives nearly twice as often as the next most frequent visitor, Alissa Fox of Blue Cross/Blue Shield, who met with White House officials 75 times, the group found.

The information was released as part of the watchdog group’s Google Transparency Project, which is intended to shed light on how the giant corporation influences government officials and public policy. The Campaign for Accountability says its has spent a year collecting and interpreting thousands of pages of public records and online documents to create this database. The nonprofit declined to share its funding source.

Earlier this week, The Intercept [part of a news organization created and funded by eBay founder Pierre Omidyar] published a report with prior figures on Google’s proximity to the White House, but it did not include the chart “Whit House visits by Lobbyists.”

Google declined to comment, but the company did point us to an official blog post from a year ago addressing similar critiques from News Corp Chairman Rupert Murdoch. The post, …written by former policy chief Rachel Whetstone, noted that Google’s visits to the White House addressed a wide range of issues, including patent reform, self-driving cars and technical assistance with the Healthcare .gov website. An administration spokesperson said the White House regularly meets with members of the tech sector. “On a daily basis, the administration engages with a broad range of public and private sector experts to better serve the American people,” a rep said.

*U.S. Chief Technology Officer Megan Smith is a former Google executive and the longtime spouse of Re/code Executive Editor Kara Swisher, from whom she is now separated.

1. a) Define lobbying.
b) What are lobbyists?

2. How many times has Google’s head of public policy, Johanna Shelton, met with Obama administration officials at the White House?

3. What information was compiled by the watchdog group Campaign for Accountability?

4. How did Google respond to a request for a response?

5. How did the Obama administration respond to questions about this revelation?

6. Read the “Background” below. A Public Citizen review found that of 102 lobbyists Google hired or retained in 2014, 81 previously held government jobs. “Meanwhile, a steady stream of Google employees has been appointed to high-ranking government jobs – an indication of the company’s growing influence in national affairs.” Do you think the amount of access Google has to the President is a problem? Explain your answer.

7. Do you think the act of lobbying Congress or the White House helps, harms, or has no effect on our country? Explain your answer.

A report [in November 2015] by the advocacy group Public Citizen, warned that Google, which recently moved into a Washington office as big as the White House, is “amassing greater political power than ever.” Over the first three quarters of 2014, it said, Google ranked first among all corporations in lobbying spending, and is set to invest $18.2 million on federal lobbying this year – even ahead of PhRMA, the powerful trade association of the pharmaceutical industry.

Of 102 lobbyists the company has hired or retained in 2014, Public Citizen found, 81 previously held government jobs. “Meanwhile, a steady stream of Google employees has been appointed to high-ranking government jobs – an indication of the company’s growing influence in national affairs.”

It also said Google funds about 140 trade associations and other nonprofit organizations across the ideological spectrum – including some working in issue areas relevant to Google’s practices on privacy, political spending, antitrust and more.

Taylor Lincoln, research director of Public Citizen’s Congress Watch division and editor of the report, said: “Google has essentially responded to concerns about its practices by saying, ‘Just trust us.’ But Google is gaining so much power that regulators may find it difficult to act if it turns out that the public’s trust has been misplaced.”

In 2012, the US Federal Trade Commission looked set to investigate Google under antitrust laws. But the case, centering on whether Google abuses its advantage in internet search by manipulating results to favor its own products, was dropped, fueling theories about the company’s hold over politicians.

Google’s reach extends beyond Capitol Hill to the White House itself. As a presidential candidate in 2008, Barack Obama visited its headquarters in Silicon Valley and told staff: “What we share is a belief in changing the world from the bottom up.” In 2012, Google’s executive chairman, Eric Schmidt, a long-time supporter, helped the technology side of Obama’s campaign and spent election night in its “boiler room” in Chicago.

“Where Google stops and government starts is hard to tell. They’re backers of Barack Obama and it’s well known in Washington how it’s done,” said an antitrust lawyer based in Washington. “I’ve heard instances of Google calling the White House to say they’re unhappy about appointments. They don’t just buy off politicians; they buy off the ecosystem, including advocacy groups and thinktanks.”

Court said: “Google leant their analytics and voter reach to Obama and they’re doing the same to Hillary Clinton. When you control the greatest technology on earth to reach people, Democrats want to be your friends.”

Scott Cleland, president of research consultancy Precursor and a former official in the George H W Bush administration, said the company’s reach goes way beyond traditional lobbying and politics. “The Google influence machine is one we’ve never seen before. It’s the first dominant company in the internet age.”

Politicians have come to rely on it for campaigning, communication and data collection they are not alone, added Cleland, publisher of GoogleMonitor .com. “The economy, mass media, not-for-profits, advertisers, the political class – they all depend on it.”

… A Google spokesperson said: “Technology is a huge part of the current policy discussion in Washington, and it will be for a long time. We think it is important to have a strong voice in the debate and help policymakers understand our business and the work we do to keep the Internet open and fuel economic growth.”
(from a December 2015 UK Guardian article “Google under scrutiny over lobbying influence on Congress and White House”)