Focus of Trump’s 1st Speech at U.N. to be: Strength, ‘Reform’ 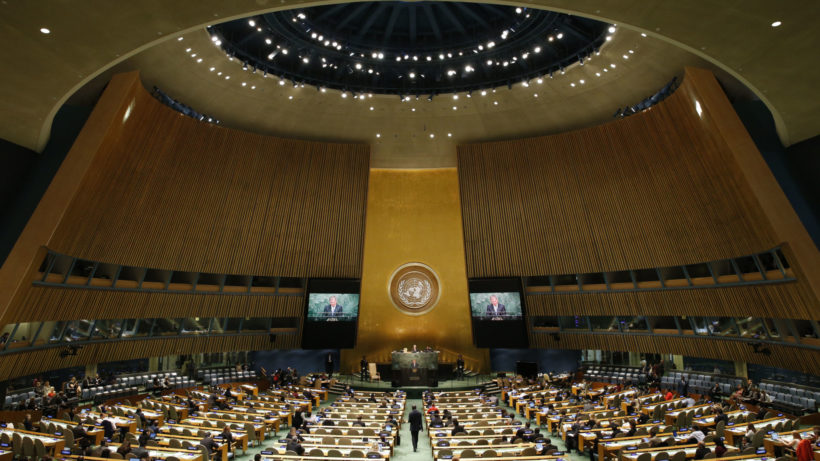 Dignitaries from 193 nations will gather Sept. 19 for a week of speeches and sideline meetings at the annual U.N. General Assembly in New York. It is President Donald Trump’s first U.N. summit.

(Compiled from articles by Geoff Bennett at NPR and Michelle Nichols at Reuters) – President Donald Trump…will attend the annual United Nations General Assembly in New York [this week], which brings together leaders of the 193 member nations for a week of meetings and speeches.

As president-elect, Trump called the U.N. “just a club for people to get together, talk and have a good time.” But it’s a “new day” at the U.N., said U.S. Ambassador to the United Nations Nikki Haley.

“The U.N. has shifted over the past several months [since President Trump took office]. It’s not just about talking. It’s about action,” Haley told reporters Friday in the White House press briefing room.

“The United Nations, of course, holds tremendous potential to realize its founding ideals, but only if it’s run more efficiently and effectively,” McMaster said. Previous administrations have pressed the U.N. to embrace change. But, unlike past presidents, Trump is promoting his “America First” agenda, and he has called for slashing U.S. financial contributions to the U.N.

[Reuters reports that the United States is the biggest U.N. contributor, providing 22 percent of its $5.4 billion biennial core budget and 28.5 percent of its $7.3 billion peacekeeping budget. The contributions are agreed on by the 193-member General Assembly, of which the U.S. has one vote.] …

Ambassador Haley stated that the U.S. approach at the U.N. summit would be “solid” and “strong,” as diplomats and top U.S. officials tackle global challenges.

“There are no shortage of issues, with North Korea being front and center,” said Haley. “Iran will be an issue. Syria will certainly be talked about. Terrorism efforts and how we counter that is a huge topic.”

The president is expected to address some of those issues on Tuesday when he takes the lectern at the U.N. to address world leaders. [He is scheduled to be the second speaker.]

[Also of note, on Monday President Trump will host an event at U.N. headquarters with the intent of gaining support for his reform proposals. Haley said 120 countries had agreed to attend the President’s meeting, at which Trump will propose a “massive reform package” that will make the U.N. “more effective.”  This follows the president’s calls for a reform of the U.N. to lower “out-of-control costs.”  Countries were invited to attend after signing on to a U.S.-drafted 10-point political declaration backing efforts by U.N. Secretary-General Antonio Guterres “to initiate effective, meaningful reform,” according to a draft of the political declaration seen by Reuters on Sept. 8th. U.N. Secretary-General Antonio Guterres speaks at a news conference ahead of the 72nd U.N. General Assembly at U.N. headquarters in New York on Sept. 13. (Photo: Mike Segar/Reuters) Guterres is a former Portuguese prime minister and was head of the U.N. refugee agency for 10 years.

Trump, Guterres, who also took office in January, and Ambassador Haley are scheduled to speak at the Sept. 18 event, diplomats said.

The draft political declaration states: “We support the secretary-general in making concrete changes in the United Nations system to better align its work on humanitarian response, development and sustaining peace initiatives.”

“We commit to reducing mandate duplication, redundancy and overlap, including among the main organs of the United Nations,” the draft declaration reads.

Compiled/adapted from news reports at NPR and Reuters. Reprinted here for educational purposes only. May not be reproduced on other websites without permission.

1. When is President Trump scheduled to speak at the annual U.N. General Assembly?

3. a) Who is H.R. McMaster?
b) How did McMaster describe President Trump’s upcoming address to the U.N. General Assembly?

5. a) Of the 193 member nations of the U.N., what percentage of the budget does the U.S. contribute?
CHALLENGE: What percentage do the billionaire controlled countries of Saudi Arabia and Qatar contribute? How much do China and Russia contribute? The EU?
b) Do you think the U.S. should pay the percentage to the U.N. that we do? Is President Trump correct or not, to insist on all countries paying their fair share? Explain your answer.

6. a) What unprecedented diplomatic feat has the Trump administration accomplished leading up to the 2017 U.N. General Assembly? Be specific.
b) Why do you think so many countries signed on to the U.S.-written U.N. reform proposal?
c) Ask a parent the same question.

CHALLENGE: Watch (and read) the President’s entire Tuesday (9/19) address to the U.N. General Assembly at WhiteHouse.gov.
a) List the major issues the President addresses in his speech.
b) For each one, what solution did he propose?
c) Were you encouraged or discouraged by the President’s speech? Explain your answer.
d) Ask a parent the same questions (c).

From an AP article at ABC News:

Watch President Trump’s speech to the UN General Assembly live on Tuesday, September 19 at approximately 10 am (Eastern) at: webtv.un.org (or visit c-span.org or whitehouse.gov)